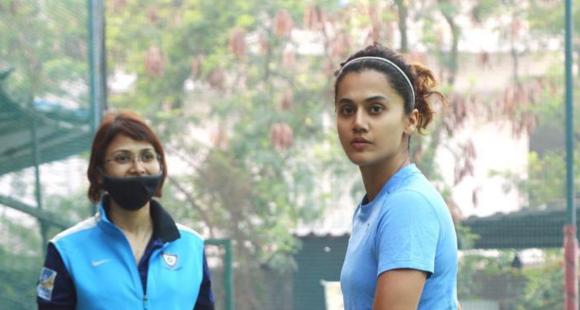 Taapsee Pannu will be playing the role of an ace Indian Cricketer Mithali Raj in the upcoming biopic Shabaash Mithu. Recently, the actress took to her Instagram stories to give us a glimpse of her cricket training.

Taapsee Pannu on playing an ace cricketer in Shabaash Mithu: It’s a huge challenge I’ve thrown at myself

Taapsee Pannu is among the most sought after actresses in Bollywood as she has multiple exciting projects in her kitty. A few days ago, the stunner had wrapped up the shoot of her sports flick Rashmi Rocket. The Badla star has now jetted off to Goa to complete the last leg of Looop Lapeta. Amid this, Taapsee has also begun the cricket training for her forthcoming film titled Shabaash Mithu. Directed by Rahul Dholakia, the film will see her in the role of an ace Indian Cricketer Mithali Raj in the biopic.

The Pink actress took to her Instagram stories to give us a glimpse of her on-field cricket training. She shared a picture wherein Taapsee can be seen holding a bat as she kicks off the training. While sharing the picture, she wrote, “Let’s start this now! For the skipper @ Mithali Raj # Shabaash Mithu.”

Speaking about her training regimen, Taapsee shared, “I’ve never played the game before, have just been a spectator and a hyper ventilating fan of the game. Being on the other side is going to be a huge challenge I’ve thrown at myself. But I feel pressure brings out the best in me. This is probably that one common trait I can identify between me and Mithali.” On a related note, Shabaash Mithu is bankrolled by Viacom18 Studios and the story is written by Priya Aven. The upcoming biopic is an inspiring tale of the captain of the Indian Women’s Cricket Team, Mithali Raj. Notably, in order to get into the skin of her role, Taapsee will be training with coach Nooshin Al khadeer.

Also Read: Taapsee Pannu shares a PIC from a flight as she heads to Goa to shoot the last schedule of Looop Lapeta