Home EntertainmentBollywood Taapsee Pannu: Our films cost as much as a male actor’s fee

Taapsee Pannu: Our films cost as much as a male actor’s fee 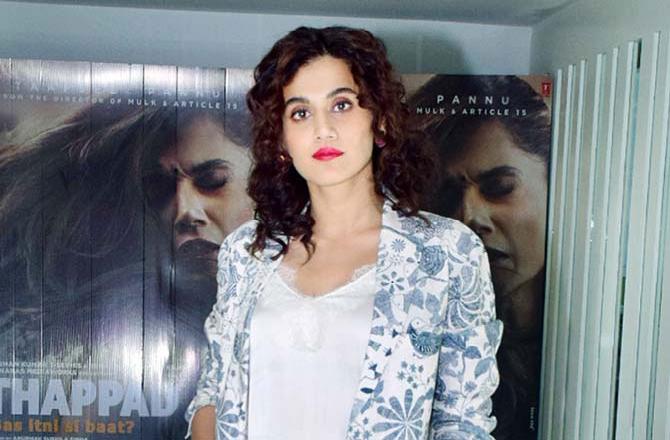 Taapsee Pannu has a lot of exciting films in her kitty currently. One of them is Rashmi Rocket, where she plays the role of an athlete. She has been sharing a lot of pictures of her physical transformation and training on her Instagram account. And now, she has spilled the beans on her prep for the role, and how sometimes actresses’ films cost as much as an actor’s fee.

In an interview with The Times of India, she said, “You don’t have as much of a budget in female-driven films as you have in male-driven ones. So you can’t rely on VFX, you have to work on your body. Besides, a female cannot invest a full year in a film because she isn’t paid as much as her male counterpart. Our films cost as much as a male actor’s fee.”

She added, “And if I decided to invest a year in the prep and shoot of a film, I would be losing out on five films. That just won’t be practical. The kind of stuff that I am now getting is something that I can hardly say ‘no’ to.” When asked about the shooting experience of Rashmi Rocket, the actress had something to say.

She stated, “Well, I certainly knew it was the role of a sprinter. Yes, there’s a difference between knowing and actually doing it. But I decided then and there that I want to go all out and do nothing half-hearted. We had the benchmark of a male sprinter’s story set by Bhaag Milkha Bhaag in India and I wanted to live up to it. The stories of ‘Rashmi Rocket’ and ‘Bhaag Milka Bhaag’ are very different but I didn’t want any discrepancy in my portrayal. But I guess, the challenge here was bigger in a way.”

Talking about what she did to get into the skin of the character, she revealed, “I had to keep my stamina alive or else I would have had to start from scratch. I didn’t want to lose my stamina that I had consequently built up due to the extensive prep that I had done. So, I was doing my workouts twice a day. Sometimes I would run in my building for a distance of 2 km. Every day, I would climb the 45 floors in my building.”

Apart from this sports drama, Taapsee Pannu also has films like Loop Lapeta, Haseen Dillruba, and the Mithali Raj biopic coming up.