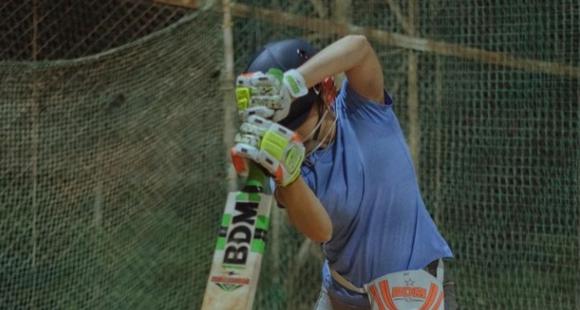 Taapsee Pannu has been practicing hard for her upcoming sports drama Shabaash Mithu. The film is based on the life of cricketer Mithali Raj.

Bollywood actress Taapsee Pannu has quite a good number of films lined up this year. The actress has been shooting back to back. She has already completed the shooting of Looop Lapeta and Dobaaraa. And now has been prepping for her next sports drama Shabaash Mithu. Taapsee has been undergoing rigorous preparation for the film. She has been treating fans from her Behind The Scene pictures on social media. The film, Shabaash Mithu, is based on the life of Indian Women’s Cricket Captain Mithali Raj.

Sharing the picture on her official Instagram handle, Taapsee Pannu wrote, “Catch it.” In the picture, Taapsee all dressed as cricketer is seen practicing in the net. She is honing her cricket skills. Yesterday also she has shared a picture in which she was seen practicing straight drive stance. Needless to say that it was near perfect when compared to a professional cricketer. The film poster had already released. The film was supposed to release in February but got postponed due to COVID 19.

Taapsee Pannu had recently Filmfare best actress award for her film Thappad. The actress is overwhelmed by the honour. Her performance in the film was highly appreciated.

Taapsee, who will be next seen in Rashmi Rocket, will essay the titular role in the film. Taapsee has completed the shooting of Dobaara which is directed by Anuraag Kashyap and has her Thappad co-star Pavail Gulati. The actress will also be seen in Haseen Dillruba.

Also Read: Taapsee Pannu on women increasingly taking up high offices that were once executed by men: It will only grow