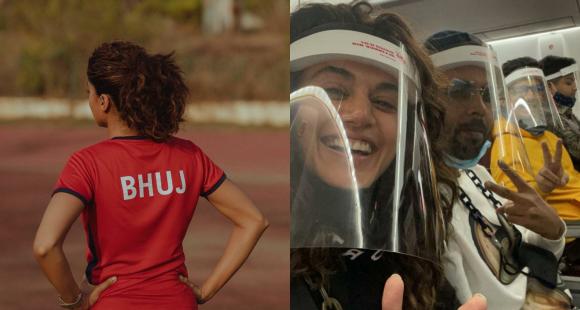 Taapsee Pannu recently jetted off to Bhuj to shoot for the last schedule of her film Rashmi Rocket. She shared an interesting picture with her co-stars.

Taapsee Pannu is considered to be one of the most talented actors in Bollywood. She keeps entertaining her fans by sharing interesting updates from the sets of her upcoming films. Now, the Pink actress took to Instagram handle to update her fans that she has jetted off to Bhuj to shoot for the last schedule of her film ‘Rashmi Rocket’. She often shares stunning pictures from the sets of the film and leaves her fans excited.

While announcing about the last schedule, Taapsee has yet again shared an amazing picture of her from the sets. In the picture, the actress can be seen donning a red jersey with Bhuj written on her back. While sharing the same, she wrote, “Next stop….#LastSchedule #RashmiRocket.” After boarding the flight to Bhuj, the actress also shared a picture with her co-stars Abhishek Banerjee and Priyanshu Painyuli. Taking to her Instagram story, she shared the picture and wrote, “Travelling partners for the day! Beech mein nikaal denge inko plane se.” On the work front, Taapsee has several interesting projects in the pipeline. Apart from Rashmi Rocket, she will be seen in Looop Lapeta, Shabaash Mithu and Haseen Dillruba. She was last seen in Thappad and the film got a lot of appreciation from the critics as well from the audiences.

Also Read: Taapsee Pannu poses for a stunning PHOTO while sitting in a bathtub; Calls it ‘Cheap thrills’