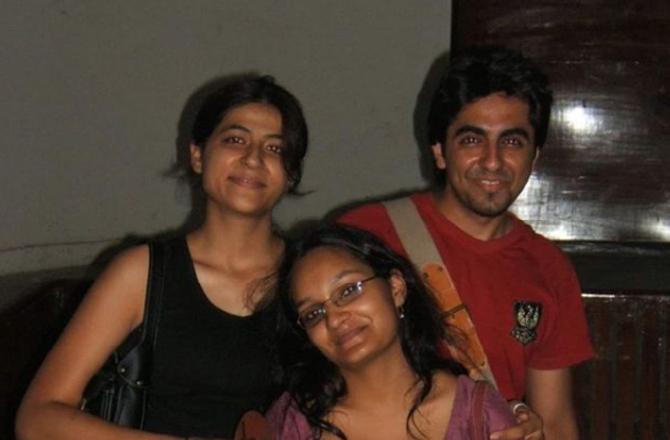 Tahira Kashyap, just like all the other celebrities these days, seems to have found this fondness for sharing throwback pictures with her hubby Ayushmann Khurana. Right from the time they got married to the time when they discovered love, she has done it all.

Now, taking to her Instagram account, she has shared one more throwback memory with the actor from their college days and don’t miss the caption. This is what she wrote- “The days of red eyes, CD’s, collarbones, self stylised fringes ( called flicks back then), never ending giggles and constant butterflies in the stomach! [sic]”

Tahira Kashyap and Ayushmann Khurrana keep sharing their pictures on social media for fans. The couple is lovely and the chemistry looks real. However, the lady has confessed of feeling upset about Khurrana’s romantic scenes in his films and how it took her time to understand the Hindi film industry.

In an interview with Pinkvilla, she revealed, “It’s not easy for someone who doesn’t come from a family involved with films because there are women around him all the time, the spotlight’s on him. I think I have come a long way and I have spoken about that in the book as well. The kind of impact it had on my mental happiness and physical well-being too.”

She added, “I ended up having IBS, which is irritable bowel syndrome. But the root cause was extreme unhappiness and I feel you know it’s not the circumstances which are unhappy but your own stress and anxiety that accentuates a situation. I needed to undergo a lot of learning and I have done that. But yes, it was difficult for me to embrace this entire concept of the film industry.”