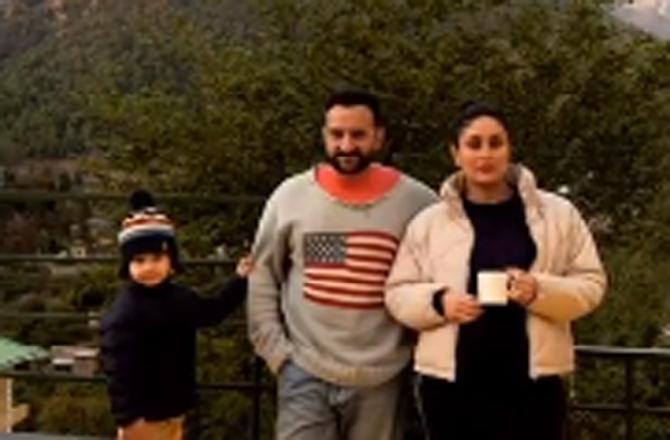 There was a time when Taimur Ali Khan used to be a tiny toddler whose shenanigans with the media stole everyone’s hearts. But as unavoidable as it gets, the munchkin is now growing up and that was pretty much evident from the latest picture shared by her mother Kareena Kapoor Khan.

She was with hubby Saif Ali Khan in Dharamshala where he was shooting for his horror-comedy Bhoot Police, and the cast has wrapped up the first schedule. Thanking the place for its hospitality, the actress shared stories on her Instagram account and one of them had Taimur too.

Kareena Kapoor Khan and Saif Ali Khan embraced parenthood on December 20, 2016, when Kareena gave birth to Taimur Ali Khan, who went on to become a media sensation after he began making public appearances with his parents. Now, the couple is set to welcome their second baby.

The couple confirmed the reports of Kareena’s pregnancy and released a joint statement. Kareena and Saif stated- “We are very pleased to announce that we are expecting an addition to our family !! Thank you to all our well-wishers for all their love and support.” [SIC]

RELATED:  Shahid Kapoor asks for suggestions to please Mira Rajput after she fires him for NOT doing a dance film

Kareena Kapoor Khan and Saif Ali Khan tied the knot on October 16, 2012. Ever since the Refugee actress has made her debut on Instagram, she keeps sharing lovely moments with her hubby and son, both. The couple has acted together in films like LOC Kargil, Tashan, Kurbaan, and Agent Vinod.

On the work front, Saif was last seen in Sushant Singh Rajput’s last film, Dil Bechara. On the other hand, Kareena will be next seen in Laal Singh Chaddha and Takht. Takht will be Khan’s second collaboration with Karan Johar where he directs the actress. This period drama, which is slated to release on December 24, 2021, also stars Anil Kapoor, Ranveer Singh, Vicky Kaushal, Alia Bhatt, Bhumi Pednekar, and Janhvi Kapoor.

New speed in the new normal! Kartik Aaryan wraps up Dhamaka in...

Kangana Ranaut: Most Sikhs are against me

Has Kartik Aaryan come on board for Shah Rukh Khan’s next home...