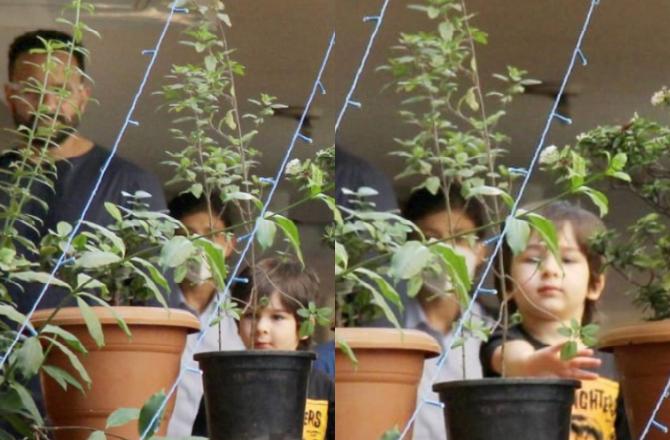 Taimur Ali Khan turned 4 on Sunday, December 20. His parents Saif Ali Khan and Kareena Kapoor Khan left no stone unturned to make his special day memorable. With the COVID-19 protocols and lockdown restrictions in place, the doting parents threw a grand birthday party, which was attended by family members.

Earlier in the day, Kareena, Saif and Taimur were spotted at their residence in Bandra, Mumbai. The trio were prepping for the big bash later in the day. We could see their residence decorated with lights and flowers. Taimur even waved to the paparazzi.

Among those who attended the celebrations included Taimur’s cute little cousin Inaaya Naumi Kemmu who looked like a princess in her white dress. She was accompanied by her parents Soha Ali Khan and Kunal Kemmu. While Soha wore a black top and jeans, Kunal opted for a casual look – a white hoodie and yellow shorts.

Later, Taimur’s aunt and Kareena’s elder sister Karisma Kapoor made her way towards Kareena’s residence. She opted for a black and white printed dress for the party.

Accompanying her were parents Randhir Kapoor and Babita Kapoor.

Last year, Taimur had a Christmas-themed birthday bash. He celebrated his special day in the presence of his parents, aunt Soha Ali Khan and his friends. Taimur looked captivated by the sight of his yummy Santa cake.

This year, the theme of the birthday party was superhero. We got hold of some pictures in which we can see preparations for a grand birthday party in full swing. We can see large balloon replicas of the kid’s favourite superheroes making its way towards Taimur’s residence.

On the special occasion, mum Kareena wrote a heartwarming note for her darling son, along with a montage of throwback pictures of the birthday boy. The Good Newwz actress shared the post on Instagram and wrote, “My child… I’m happy at four you have such determination, dedication and focus on what you want to do… which is now picking up the haystack and feeding the cow (sic)”.

Soha Ali Khan also wished her nephew a happy birthday by sharing some beautiful pictures of the birthday boy with Inaaya. “Happy birthday Tim Tim My big brother – four today and for always @kareenakapoorkhan (sic)”, she captioned the picture.

Karisma Kapoor also wished Taimur on his birthday with a cute picture of the two. Sharing the picture on her Instagram handle, she wrote, “Kisses for my jaan Taimur. Happy Birthday! We love you loads! (sic).”