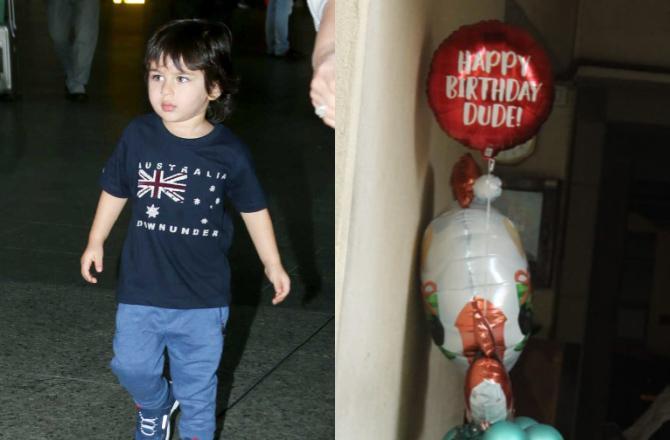 Taimur Ali Khan makes headlines for everything he does or says. His 4th birthday celebration is no exception. The kiddo, who has established a solid fan base for himself, turns four on December 20.

His proud parents, Saif Ali Khan and Kareena Kapoor Khan, have decided to celebrate his birthday in a grand manner. We got hold of some pictures in which we can see preparations for a grand birthday pary in full swing.

Looking at the pictures, it seems the theme for this year’s birthday party is superheros as we can see large replicas of the kid’s favourite superheros.

Last year, Taimur had a Christmas-themed birthday bash. He celebrated his special day in the presence of his parents, aunt Soha Ali Khan and his friends. Taimur looked captivated by the sight of his yummy Santa cake. We are certainly looking forward for this year’s birthday bash.

On the special occasion, mum Kareena wrote a heartwarming note for her darling son, along with a montage of throwback pictures of the birthday boy. The Good Newwz actress shared the post on Instagram and wrote, “My child… I’m happy at four you have such determination, dedication and focus on what you want to do… which is now picking up the haystack and feeding the cow (sic)”.