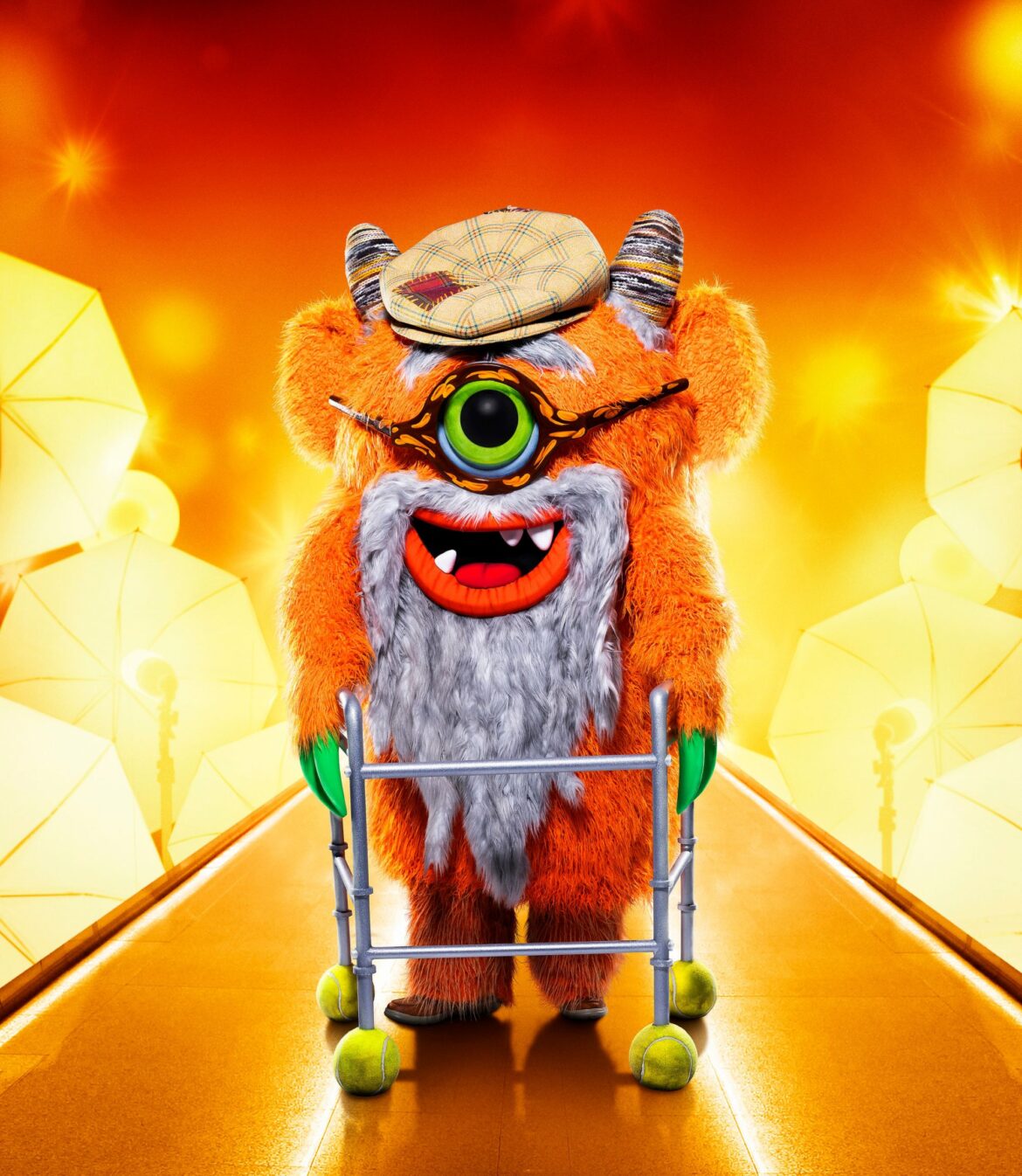 The Grandpa Monster was the cutest and cuddliest character of The Masked Singer Season 5, but when he was unmasked at the end of Wednesday’s Group B episode, he turned out to be not-so-cuddly YouTube star Logan Paul.

Apparently donning a safety-orange fun-fur cyclops costume was the controversial internet personality’s latest attempt to rehab his image, after coming under fire over the years for insensitively posting a video of a corpse in Japan’s “suicide forest,” participating in the Tide Pod challenge, removing a fish from his pond to “jokingly give it CPR,” tasering two dead rodents, and implying that homosexuality is a choice (among other transgressions). I’m not so sure The Masked Singer really needed to give this problematic dude a platform, but this is a show that let Sarah Palin perform in a bear suit once, so the bar was admittedly already set fairly low.

“I’m reformed!” Logan insisted Wednesday, although guest host Niecy Nash didn’t seem too convinced, since the Grandpa Monster spent his final performance singing Joan Jett’s “Bad Reputation,” tearing up a photo of rival the Piglet a la Sinead O’Connor on SNL, and pretending to blow up the stage with TNT. But there is one thing Logan said that was believable, and that everyone could agree on. “Imma be honest, guys. I never stood a chance. What am I doing here? I’m a YouTubing, boxing, Pokémon collector,” Logan shrugged in a rare moment of humility, before adding, “Good luck, Black Swan! I want her to win. She’s very good.”

So, that left three other celebrity cosplayers in Group B… or actually four, as this week’s episode introduced the next “wild card” of this “game-changing season,” the Crab. And the Crab’s touching tour de force truly was a game-changer; I think he could sink his claws into the competition and win the whole thing, or at least make it to the finale alongside the Logan-endorsed Black Swan. Until then, below are the Group B singers who performed well enough to stay a little longer at what Niecy called “Hollywood’s freakiest costume party.”

The Piglet, “Good to Be Alive (Hallelujah)”

This showman went hog-wild onstage and was a total ham — bringing that big pork energy while the judges cheered him on with delighted squeals of “oink, oink!” It was like being at a cosplay county fair. But this porcine performer’s vocals were also impressive — strong enough to inspire Charlotte to spin a commemorate “Some Pig” web in his honor. “Your voice is fire! I love everything about you,” raved judge Jenny McCarthy-Wahlberg.

Clues: We saw a lot of football references, a knight in shining armor, and the numbers 11, 03, 50:10, and 3528. The Piglet’s “competitive nature made him a hometown hero”; his first celebrity crush was Meg Ryan; and he is apparently “arch rivals” with the Grandpa Monster. (Who isn’t, really?) In his previous clues package, the Piglet described himself as a “hopeless romantic” who “hasn’t always been lucky in love” and has “given away a few roses” that had “sharp thorns.”

My guess: This little piggy sounds so much like Nick Lachey, I can’t really entertain any other guesses. This I swear.

The Black Swan, “In My Blood”

This ethereal Gothic creature once again spread her wings and delivered a stunning, Evanescence-like rock ‘n’ soul performance. Judge Ken Jeong said she had the “strongest spirit” of any contestant this season and seemed to be seeking redemption. “There’s something that’s driving you beyond this competition,” Ken observed.

Clues: The Black Swan dedicated her emotional performance to “the person who gave me life and the confidence to start this journey.” She seemed to be referring a parent or an older mentor/authority figure from whom she became temporarily estranged, but with whom she had recently reunited, saying they are once again “birds of a feather.” We saw the scales of justice and a penny and a nickel (possible representing the number six), and she confessed that her first crush was D’Angelo (indicating that she would have been a child in the ‘90s or early 2000s). In a past clues package, the Black Swan implied that she’s an ex-child star who was manipulated by the Hollywood machine, but her “faithful flock” of fans has stuck with her.

My guess: I already guessed last time this was JoJo based on the voice alone, and now I am even more certain that it is her. JoJo signed to Blackground Records at age 12 and later sued the label for “irreparable damages to her professional career,” resulting in a fan-driven #FreeJoJo campaign. She also had a complex relationship with her absentee alcoholic father (who died in 2015) and lived with her single mom/manager until she was 18. JoJo, your life is calling. It all adds up.

Clues: We saw an oil painting (with rainbow paint), peaches (probably representing Georgia), a sign that read “Bon Jour,” a cheese plate, and a lot of fashion-design/tailoring references. The Chameleon’s mission is all about “embracing what makes him unique” and “helping others to shine” and show their “true colors.” When he was younger, someone “inseparable” from him was “constantly attacked for who she was,” and then “tragedy struck” and she was “taken” from him. Now he just wants to honor her memory. Previous clues have referenced computer technology, DJ culture, video games, entrepreneurship, and a famous father figure.

My guess: The internet seems to think the Chameleon is Wiz Khalifa, because the tailoring visual may reference his “Taylor Gang.” But the other clues don’t add up for me. Instead, I am going to take a wild guess that this is Georgia-born shapeshifter and LBGTQ+ icon Lil Nas X. Nas lost his grandmother in 2017, his dad is a gospel singer, he used computer technology to create his hit “Old Town Road,” and he’s a fashionista. So, I am going to call the Chameleon by Montero’s name.

The Crab, “Ain’t No Sunshine”

This “wild card” song stylist bumrushed the show and instantly had judge Nicole Scherzinger in tears with this performance dedicated to the many loved ones he has lost. “I really feel like you meant every word,” she gushed. Ken additionally described this number as the “rawest performance we’ve had on this show.” The Crab’s voice was rough, but real, and he poured a lot of palpable pain into his Bill Withers cover. It was so compelling that I actually forgot he was dressed like a giant glittery crustacean. “This is wild card we needed,” declared Jenny.

Clues: He “dreamed of being a star all his life,” then that dream “came true in a flash” and he felt like a “king crab.” But with “every blessing came tragedy,” and all his life he has “struggled with the darkness that has followed me and my family.” We saw a broken mirror (so this Crab has had a lot of bad luck), a Mona Lisa painting, the numbers two and three, a boxer dog, and glimpses of past contestants the Bee (a.k.a. Gladys Knight) and the Butterfly (Michelle Williams).

My guess: I really think this is Bobby Brown, even though the judges rarely guess correctly the first time around for fear of spoiling viewers’ fun. Former R&B superstar Bobby, who skyrocketed to fame with teen group New Edition, has dealt with unspeakable loss (the deaths of two children and his ex-wife, Whitney Houston). He also has ties to family friend Gladys Knight through Whitney, and he co-starred with Michelle Williams on BET’s American Soul. The dog and butterfly/bee clues could mean this is a pro boxer… but I can’t think of any boxer who can sing like this. Whoever the Crab is, he still has a lot of fight in him.