Tamil Nadu Assembly Elections | Tirumangalam, the one with a ‘winning formula’ awaits development 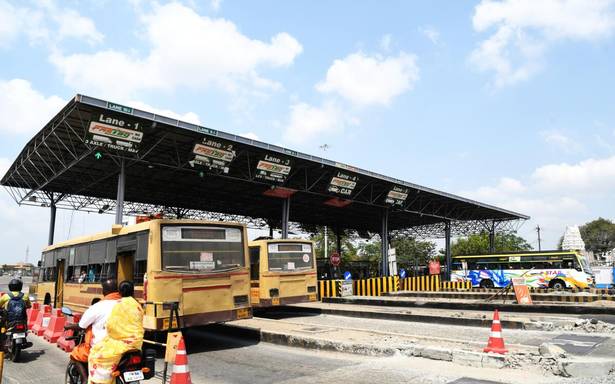 A lack of industrial development is among issues plaguing Tirumangalam.

The first phrase that pops up in the mind after hearing the name of the Tirumangalam Assembly constituency is ‘Tirumangalam formula’. The constituency gave the fine-tuned version of the ‘cash-for-vote’ formula to Tamil Nadu politics in the 2009 byelection, which resulted in a landslide victory for the DMK.

Despite being in the spotlight, a range of issues in the constituency remain unaddressed, such as the delay in shifting of the mofussil bus stand, the non-convenient location of the Kappalur toll plaza, lack of industrial development and shortcomings in infrastructure at the Kappalur industrial estate.

The constituency, represented by Revenue Minister R.B. Udhayakumar, who is seeking re-election, comprises the Tirumanagalam municipality and villages in the Kallikudi block and T. Kallupatti town panchayat.

Similarly, the toll plaza is located just 1.5 km from Tirumangalam Municipality, which is a violation of the NHAI rules.

Residents have also been vehemently opposing the collection of toll, saying that it is economically unviable for them to pay it for travelling between Tirumangalam and Madurai city.

Mr. Manimaran said vehicles of industrial units pass through the proposed toll plaza multiple times a day, and that this adds to additional burden on the production cost for industries. Similarly, vehicles coming from Shencottah and Rajapalayam have to pay toll for covering a distance of about 1 km near Thirumangalam on the National Highway.

The demand for a separate mofussil bus stand, too, remains unfulfilled.

The satellite township in Thoppur and Uchapatti villages, of which the Uchapatti region falls under the Tirumangalam constituency, is yet to see considerable progress.

Although Ministers and MLAs from Madurai visited the project site in June 2016, the work is yet to be completed.

The Kappalur industrial estate, which has around 600 micro, small and medium enterprises, employs around 20,000 people. Despite being one of the largest industrial estates in the State, there are several inadequacies in basic infrastructure. Kappalur Industrial Estate association president P.N. Ragunantha Raja said insufficient drinking water, a lack of streetlights and damaged roads are some problems plaguing the estate.

A majority of voters from the constituency belong to the Mukkulathor community. In the upcoming election, Mr. Udhayakumar remains hopeful of victory.

The DMK has fielded M. Manimaran, hoping to wrest the constituency from him. The AMMK has fielded K. Athi Narayanan, the NTK has nominated M. Saral and the MNM, M. Ramkumar.