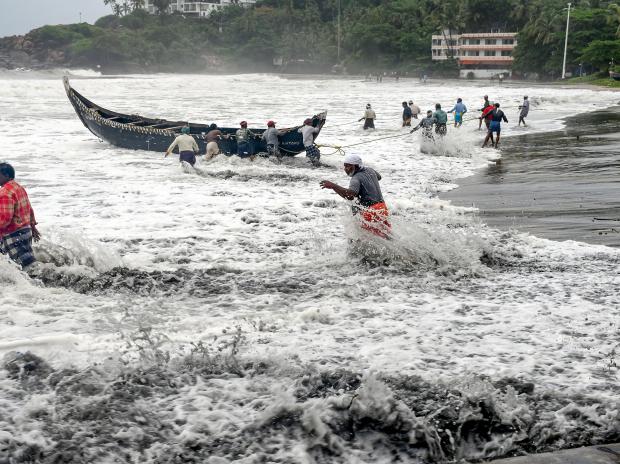 The Tamil Nadu government on Saturday braced for the impact of cyclone Tauktae, with chief minister M K Stalin directing officials to monitor level of water in dams and also ensure people’s safety.

‘Tauktae’, currently over east-central and adjoining SE Arabian Sea, is likely to intensify into a severe cyclonic storm in the next 12 hours, according to the Met office.

Kanyakumari district having its border with Kerala, Tirunelveli and some of the districts in the Western Ghats region received rains today.

There was inundation at several places in Kanyakumari and Tirunelveli districts.

Instructing authorities to keep in mind the COVID-19 norms while evacuating people and in lodging them at safer places, the chief minister asked officials of districts likely to be affected with heavy rains and gusty winds to be prepared to launch relief and rehabilitation measures.

Kanyakumari collector M Arvind visited inundated areas in Thiruvattar in the district along with officials.

The Kodaiyar river in Kanyakumari district continued to receive heavy inflow since morning and water was flowing at a level of 12.28 m with a rising trend which is 0.28 m above its danger level of 12 metres, according to the Central Water Commission flood forecast.

“Four teams from the National Disaster Response Force two in Madurai besides one each at Coimbatore and Nilgiris – in addition to the state disaster response force have been deployed, to assist the administration in relief and rescue measures in the wake of the cyclone,” Stalin said while reviewing the precautionary measures to be launched in the southern districts.

According to an official release here, the chief minister said fishermen from 162 out of 244 deep sea fishing vessels have returned and officials should take steps to make sure the fishermen from remaining vessels returned safely.

(Only the headline and picture of this report may have been reworked by the Business Standard staff; the rest of the content is auto-generated from a syndicated feed.)

Business Standard has always strived hard to provide up-to-date information and commentary on developments that are of interest to you and have wider political and economic implications for the country and the world. Your encouragement and constant feedback on how to improve our offering have only made our resolve and commitment to these ideals stronger. Even during these difficult times arising out of Covid-19, we continue to remain committed to keeping you informed and updated with credible news, authoritative views and incisive commentary on topical issues of relevance.
We, however, have a request.

As we battle the economic impact of the pandemic, we need your support even more, so that we can continue to offer you more quality content. Our subscription model has seen an encouraging response from many of you, who have subscribed to our online content. More subscription to our online content can only help us achieve the goals of offering you even better and more relevant content. We believe in free, fair and credible journalism. Your support through more subscriptions can help us practise the journalism to which we are committed.