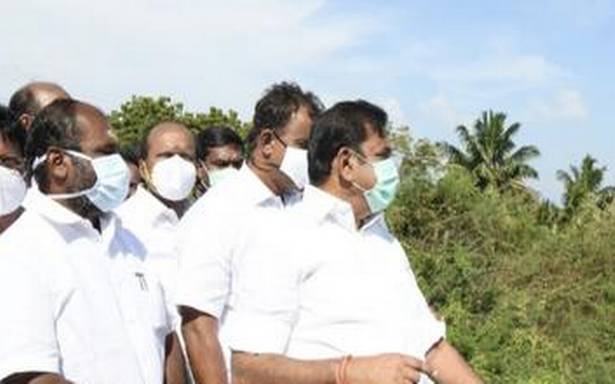 As the first step towards chalking out a plan to prevent flooding and inundation in low-level areas in and around Chennai during the monsoon, Chief Minister Edappadi K. Palaniswami on Monday visited some localities to take stock of the situation.

Speaking to reporters later, Mr. Palaniswami said a permanent solution would be found to flooding at Semmenchery, Perumbakkam, Madipakkam, Pallikaranai, Perungudi and Velachery.

Surplus rainwater from Semmenchery, Perumbakkam, Pallikaranai, Perungudi and Velachery in south Chennai would drain into the mangrove at Pallikaranai and then into Buckingham Canal, he said, adding that new habitations had come up on 80% of the areas at Ram Nagar, Madipakkam and Velachery since 2004.

He said steps were being taken to channelise excess rainwater to Buckingham Canal and a plan was being prepared to drain excess water from Velachery.

“We have sought ₹581 crore from the Centre for new canals, and we are hoping to get funds,” Mr. Palaniswami said.

The government would also find a permanent solution to flooding at West Tambaram, Mudichur and Varadarajapuram in Chengalpattu. He recalled having instructed officials on October 28 to implement a scheme with assistance from World Bank.

When it was pointed out that these areas were inundated in 2015 too, the Chief Minister said: “It was flooded even before. We are pumping out stagnant water. The government needs funds to remove water. Only with financial resources can we implement the scheme.” The government had sanctioned funds to drain excess rainwater, he said, and it was working on a long-term plan.

Replying to a question, he said only one-fifth of the areas had houses in 2004 at Ram Nagar, Madipakkam and Velachery, and now houses had been built on 80% of the areas. “These are low-level areas having waterbodies. Only because houses were built here, there is a problem now,” he said.

Asked whether the government would act against those who built houses and other encroachments here, Mr. Palaniswami said: “We have come to do a good work. The government is trying to help people living in low-level areas, who are struggling for a permanent solution. You should appreciate it.”