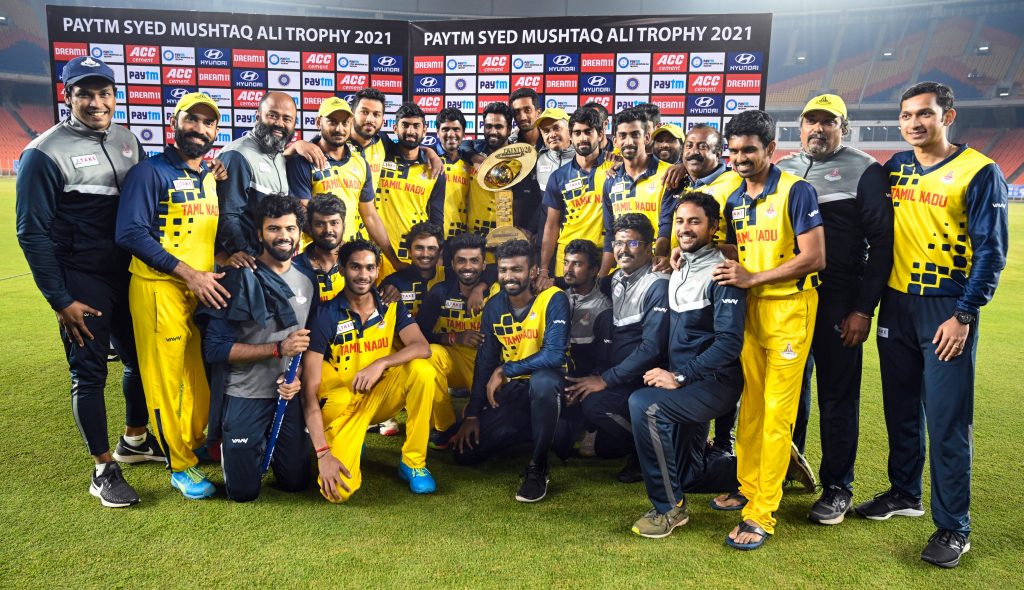 Tamil Nadu led by Dinesh Karthik beat Barida in the final of the Syed Mushtaq Ali Trophy final in Ahmedabad to be crowned champions of the season. Tamil Nadu chased down 121 required to win with seven wickets and two overs to spare. They fell short by just one runs in the final against Karnataka last year and this year they have won their second title. Skipper Dinesh Karthik scored a crucial 22 in the run chase.

After Dinesh Karthik’s wicket in the 17th over, Shahrukh Khan played a 7-ball cameo and took his team to victory. He scored 18 runs off seven balls including two fours and a six at the newly-built Motera stadium in Ahmedabad. Baba Aparajith (29) and Hari Nishant (35) provided a good start to the Tamil Nadu innings after an early wicket.

Earlier in the final, Tamil Nadu won the toss and opted to bowl. Left-arm spinner Manimaran Siddharth proved his captain’s decision was true by picking up four for 20 in his spell. He was almost unplayable and turning the ball square. Sonu Yadav, Mohammed and Aparajith picked up a wicket each.

Baroda kept losing wickets right from the start before Vishnu Solanki (49) and Atit Sheth (29) put on 58 runs for the seventh wicket, the former bringing the 100 up for Baroda in the 19th over with a six off Sonu. Solanki was run out for 49 in what was another important innings for his team. 38 off his 49 came against pace as the Tamil Nadu spinners were almost unplayable on the night. At 36 for 6 in the ninth over, Broad batted their full quota of overs thanks to the partnership between Solanki and Atith.

The final of the Syed Mushtaq Ali turned out to be a one-sided one ultimately as the experienced Tamil Nadu side chased down the score in style winning the title for the second time. Skipper Dinesh Karthik scored 183 runs with a strike rate of 157.75. he scored a few forties and came up with important contributions in the competition.