Home EntertainmentGossips Tara Sutaria looks bewitching doing her makeup touch up as she gives a glimpse of her ‘fun shoot day’; WATCH

Tara Sutaria looks bewitching doing her makeup touch up as she gives a glimpse of her ‘fun shoot day’; WATCH 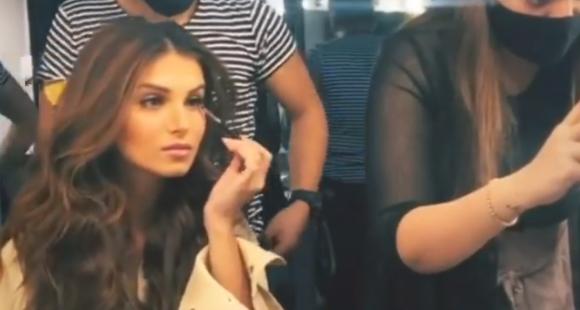 Tara Sutaria, who has many interesting lineups, recently dropped a boomerang video from her shoot day and it’s all about glamming up. Take a look.

Tara Sutaria looks bewitching doing her makeup touch up as she gives a glimpse of her ‘fun shoot day’; WATCH

Tara Sutaria, who made an impressive Bollywood debut with the 2018 film Student of the Year 2 alongside Tiger Shroff, has managed to carve a niche for herself in the film industry. Despite being just a few films old, the stunner has earned worldwide recognition with her acting prowess. The Marjaavaan star also enjoys a massive fan following on her social media handles and leaves no chance to make her fans gush about her gorgeous looks. From giving an update about her work commitments to sharing her breathtaking pictures, Tara ensures to keep her fans posted about her day to day activities.

Recently, Tara took to her Instagram story to give a sneak-peek into her ‘fun shoot day’ and it was all about glamming up. She dropped a boomerang video wherein the stunner was seen doing her makeup touch up, particularly eye makeup. Tara looked drop-dead gorgeous with her hairdo and makeup game on point. In the video, the Student of the Year 2 actress can be seen sitting in the front of a mirror with her hair and makeup stylist as she is seen doing touch up with a brush. While sharing the boomerang, she wrote, “Fun shoot day.”

Take a look at the video below:

Meanwhile, Tara recently shared the first poster of her upcoming film Ek Villain Returns on her Insta handle. Sharing her excitement, she had written, “Aapko shikayat ka mauka nahi denge.. #EkVillainReturns, February 11, 2022.” The film that is a sequel to Mohit Suri’s 2014 film will also feature John Abraham, Arjun Kapoor and Disha Patani. Apart from this, the stunning actress also has Milan Luthria’s Tadap with Ahan Shetty in her kitty.