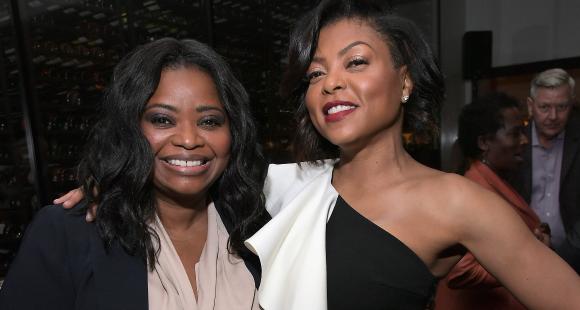 Octavia Spencer recently revealed the prank her Hidden Figures co-star Taraji P Henson played on her for April Fool’s Day. Scroll down to see what it was.

Octavia Spencer recently shared a text message she received from Hidden Figures co-star longtime friend Taraji P. Henson on April Fools’ Day. Taking to Instagram to share the cheeky text with her fans, the Oscar-winning actress shared a screencap of the message, which said, “Did you mean to post nudes on your story?” Taraji then pressed the enter button a bunch of times to make sure Octavia had to keep scrolling to see the rest of the message, which said, “April Fools! Just kidding, in case your heart dropped!”

Octavia responded to the texts by saying, “Girl my heart dropped. Lmao.” She shared the screencap on Instagram and captioned the post, “Just got this from @tarajiphenson and nearly fainted. Omg #ShesSoDayumFunny #ScaredTheHellOuttaMe.” Taraji‘s Empire co-star Gabourey Sidibe commented and said, “I got it too! I threw the phone!”

On the professional front, last month, Spencer teamed up with real-life pal Melissa McCarthy in the first trailer for their new Netflix film Thunder Force, which sees their characters reunite as adults after being best friends as kids. McCarthy and Spencer have long been friends and previously told People magazine they relished working together on the superhero comedy, directed by McCarthy”s husband Ben Falcone.

“Working with Melissa has always been an amazing experience,” Spencer told PEOPLE. “She’s extremely talented, kind, funny, the first person to arrive and the last one to leave the set. It was a delight to do scenes with her because she always brought something different to each take. Usually, something extremely hilarious! It was difficult for me to not break character and laugh…sometimes, I just couldn’t help myself because there is only one Melissa McCarthy. She’s the best there is!”