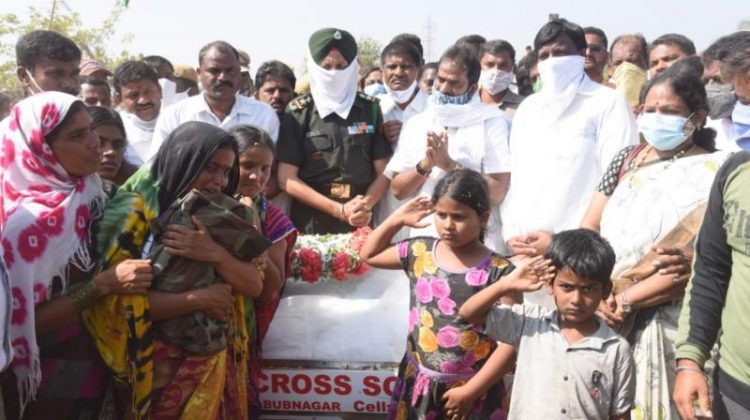 Mahbubanagar: Army Havildar Parusuram was given a tearful send-off by people of Guvvini Kuuta Thanda in Mahabubnagar’s Gandeed mandal on Sunday. Excise minister Srinivas Goud, Army personnel and a large number of villagers joined the last rites of Hav. Parusuram, 35, who died in a landslide in Leh Ladakh.

A pall of gloom descended on the tiny thanda with a population of 750. It is a Lambada thanda but children educated in the village have been working as nuclear scientists, government officials, police personnel, and teachers. The thanda has sent two of its children to the Army out of which one, Hav. Parusuram, lost his life in a freak condition, said a village elder.

Shanti Bai. 35, wife of Hav. Parusuram said her future was bleak as she has to raise two kids, aged eight and six, all by herself. Sobbing uncontrollably, she said the government had announced financial aid and a house site for her but it should show magnanimity and extend liberal benefits as it had done in the case of other Army personnel who lost their lives. She said a government job suiting her qualification would give more support and strength to her. She has studied up to Class 10.