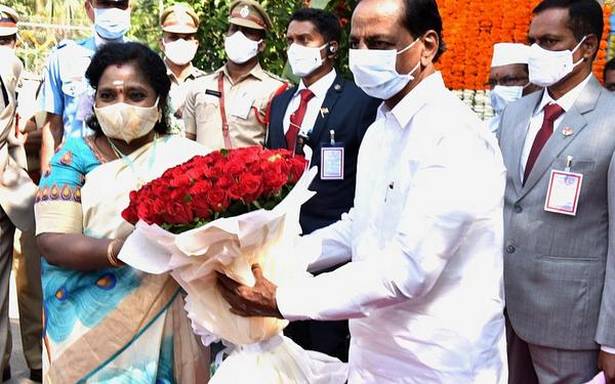 With its new schemes and initiatives State has turned out as inspiration for others, says Tamilisai

Asserting that Telangana, the new State with new schemes, initiatives and new innovations created a new record, Governor Tamilisai Soundararajan said it is emerging as the strongest State and providing inspiration to other States to emulate the ‘Telangana Model’.

The Governor said the State has achieved several distinctions in agriculture, power and supply of drinking water to 100 per cent households compared to the rest of the country in a short span of six years as the government was able to reconstruct and rebuild the State with full dedication, determination and commitment. “Though a newly born State, Telangana has been attracting the attention of the entire country and became a role model that is ‘Telangana model’,” she said.

The Governor was speaking after unfurling the tricolour to mark the 72nd Republic Day on Tuesday. Chief Minister K. Chandrasekhar Rao received the Governor as she arrived at the venue, the Public Gardens, and introduced several civil and defence officials to her. Dr. Soundararajan inspected the ceremonial parade conducted under the overall command and control of College or Air Warfare (CAW) commandant Air Vice-Marshal K.S.K. Suresh. CAW officer commanding (unit) Wing Commander Jamal A. Nasir was the chief coordinating officer of the parade in which 26th battalion of the Madras Regiment, Indian Air Force and 8th Battalion of Telangana State Special Police participated.

In her more than half an hour speech, the Governor recalled how the State stood first and unique in the country in several sectors due to planned and systemic efforts and had turned out as inspiration for other States. She elaborated on the efforts made by the government which could effectively contain the spread of Covid-19 and said the State ranked well above the national average in terms of recovery rate while it was far below the national average in case fatality rate.

The Government incurred huge revenue loss of ₹ 52,000 crore due to disruption of activities caused by the pandemic. It had however continued all the welfare and social security schemes for the poor in spite of steep fall in the revenue. The Governor made a special mention about the Palle Pragati and Pattana Pragati, the two flagship programmes that changed the face of the rural and urban areas.

The Dharani Portal introduced as part of land reforms was highly successful, the initiatives in the agriculture sector ensured that paddy was cultivated in 1.04 crore acres of land as against the 35 lakh acres at the time of the State formation. “Telangana accounted for 64 lakh tonnes of the 1.15 crore tonne paddy procured by the FCI, contributing 55 per cent of the total procurement,” she said.

The State had also become number one in terms of per capita power consumption, an important indicator of the development index. “Council of Energy and Environment and Water declared that Telangana State is number one in the country in electricity access and electrification. This is the appreciation the State got at the international level,” Dr. Soundararajan averred.

While reforms were put in place to ensure easy access of administration for the common man, equal emphasis was laid on public health. The NITI Ayog declared that Telangana State consecutively stood third in the country for the third time in providing better medical facilities in government hospitals. The Governor also elaborated on the developments in the Industrial and Information Technology areas while the government had put the lockdown period to best use to complete the road works and construction of bridges in the city. Maintenance of law and order was on the top of the agenda and it was important to note that 65 per cent of CCTV cameras installed in the country were in Telangana.

Back to Top
Close Add post
X
A Glimpse into Gandhi, Tilak, Savarkar’s Freedom Struggles: Pune’s Yerawada Jail Now Ope…IndiaMaharashtra Chief Minister Uddhav Thackeray on Tuesday launched a jail tourism initiative in the state with an aim to help students and other citizens…

Telangana emerging as strongest in the country: Governor