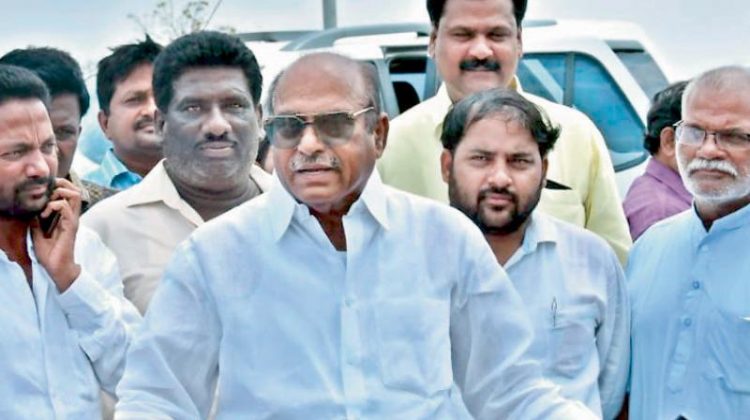 ANANTAPUR: Tension prevailed in Tadipathri town after followers of YSRC legislator K. Pedda Reddy ransacked the residence of his rival and TD leader J.C. Diwakar Reddy and attacked Dasari Kiran, close aide of Prabhakar Reddy, for allegedly having posting against the MLA’s wife on social media.

Prabhakar Reddy and his family members were not in the house at the time of the attack. However, the situation turned violent when he rushed home and both groups began pelting stones at each other.

Two vehicles, including that of Pedda Reddy, were damaged while some party workers from both sides suffered injuries.

Sources said a post against Pedda Reddy’s wife about collection of money from sand reaches went viral. In fact, they have been viral for the past one month. Pedda Reddy’s rented party office is in the same colony where Diwakar Reddy’s house is located.

Pedda Reddy stopped his convoy in front of Diwakar Reddy’s house and rushed into it accompanied by more than 30 close aides along with armed gunmen and the local sub inspector.

However, none of the family members were around. Close aides of the MLA attacked Dasari Kiran and beat him severely for the social media post. The MLA sat on a chair and came out after issuing a stringent warning to Kiran to quit Tadipatri.

On being informed, Prabhakar Reddy rushed to the house. Meanwhile, many followers of JC and TD party cadre gathered at his residence.

In the subsequent pelting of stones, the MLA’s car was damaged while the police rescued his son Harshanvardhan Reddy.

SP Satya Esubabu rushed to Tadipathri and monitored the situation. Additional forces have been deputed and Section 144 has been imposed.

Expressing anger over the MLA’s behaviour and the failure of police, Prabhakar Reddy threw out the sofa chair on which the MLA sat and set it on fire.

However, Prabhakar Reddy said he would not lodge any complaint against the MLA or others in connection with the attack on his residence.

Meanwhile, Pedda Reddy said he went to JC’s residence to question about the posts against his wife.