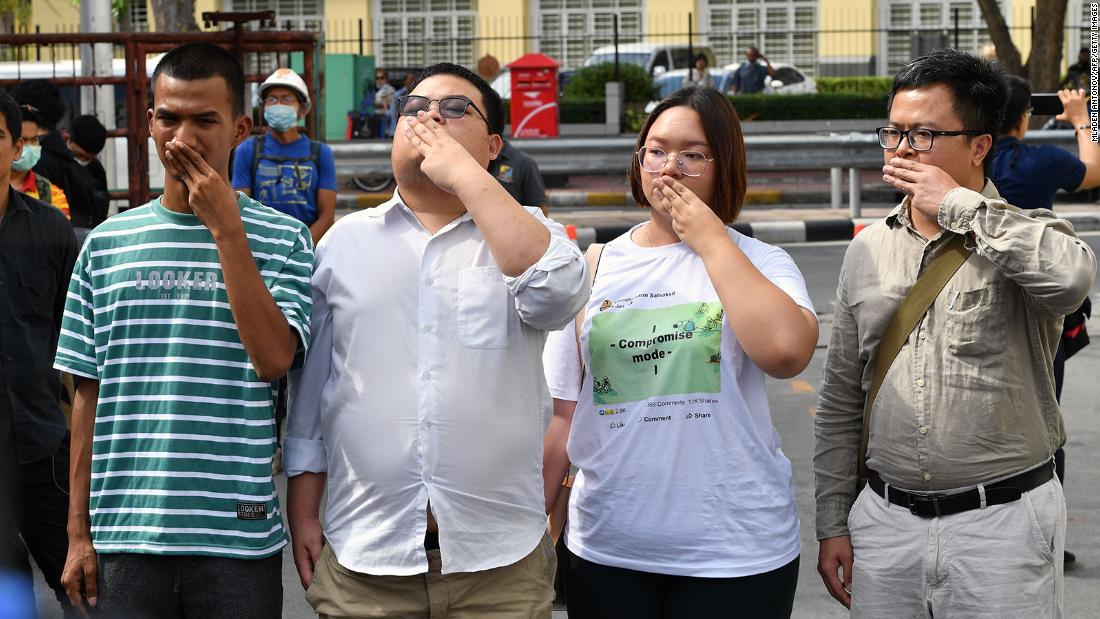 It’s the first time in more than two years that the law has been used, signaling that authorities are becoming increasingly frustrated with the demonstrations against the country’s military-backed government, which are calling for reforms to the military-drafted constitution and powerful monarchy.

Thailand’s royal family is shielded from scrutiny by one of the world’s strictest defamation laws, under which criticizing or insulting the King, queen or heir apparent is punishable by a maximum 15 years in prison for each count.

The five activists are human rights lawyer Arnon Nampa, who was one of the first to publicly call for reform of the monarchy, and Panusaya Sithijirawattanakul, who read out 10-point list of demands for monarchy reform, as well as Parit Chiwarak, Panupong Jadnok and Patiwat Saraiya, according to their lawyer Noraset Nanongtoom.

Noraset, who is a member of Thai Lawyers for Human Rights, said in a Facebook post that the five turned themselves in to police in response to a summons accusing them of violating the lese majeste law.

“The allegation has been derived from expressing their views,” he said.

Protesters are calling for the monarch to be accountable to the constitution, a curb on the King’s powers, and demanding transparency over his finances.

Outside Chanasongkram police station Monday, prominent activist Parit said: “If the monarchy showed some signs of listening to the people, they would think the monarchy is opened mind. But if the monarchy reacts by using section 112 (lese majeste) to silence the people, it only shows to the Thai and international community that Thai monarchy fears the truth.”

Thailand’s democracy movement has become the biggest challenge to the establishment the country has seen in decades. Protesters have held regular demonstrations for five months, demanding the resignation of Prime Minister Prayut Chan-o-cha — who seized power in a military coup in 2014 — as well as the dissolution of Parliament and changes to the constitution that they say entrenches the military’s power.

Despite the recent calls to reform the monarchy, no lese majeste charges had been filed since March 2018. Prayut said in June that the law was no longer being applied because of a request from the King.

But protests have become more violent. In mid-November, at least 55 people were injured — including several shot by live ammunition — when protesters, police and pro-monarchy groups clashed outside Parliament in pitched street battles. Police used tear gas and water cannons with chemical-laced water to disperse protesters.

Afterward, Prayut said the situation had not de-escalated and called on the government to “enhance” measures and use “all the pertaining laws” against protesters who violate the law. The summoning of leading democracy activists indicates authorities have run out of patience with a protest movement that has not been put off by arrests and escalated police action.

“The reintroduction of lese majeste law signals the royalist establishment’s intensification of ‘lawfare,’ manipulating all available legal instruments backed by a partial judicial system to put down what is effectively an insurrection led by younger Thais,” said Thitinan Pongsudhirak, political scientist and director of the Institute of Security and International Studies at Chulalongkorn University.

“Their strategy is to use suppressive laws as a straitjacket to keep protest leaders tied down and thereby decapitate the protest movement for reform of the monarchy with a new constitution.”

Previously, lese majeste was increasingly used as a political tool as ordinary Thai citizens — as well as the government — could bring charges on behalf of the King. There are now concerns that complaints against protesters will become more frequent.

According to Thitinan, the law could “provide legal weapons to ultra-royalists to charge those who are calling for monarchy reform.”

On Sunday, protesters marched to the gates of the 11th Infantry Regiment, part of the King’s Guard that played a role in the suppression of anti-establishment protests in 2010.

They have accused the monarchy of giving military rulers legitimacy in exchange for their steadfast support of the monarchy. There have been 13 successful military coups since 1932, the most recent when current Prime Minister and former army chief Prayut seized power in 2014.

As well as consolidating his power, protesters have scrutinized the King’s financial conduct, while the country grapples with the economic impacts from the coronavirus pandemic.

In 2018, the Crown Property Act was amended to allow Vajiralongkorn to transfer billions of dollars’ worth of royal assets traditionally held by the Thai Crown directly into his control, making him one of the world’s richest monarchs.

Shares at various Thai conglomerates — including the Siam Commercial Bank and Siam Cement Public Company — were put into the King’s name. According to the Stock Exchange of Thailand, Vajiralongkorn is SCB’s biggest shareholder, holding almost 800 million shares worth approximately $2.3 billion at the current rate.

Protesters have called for an investigation into the King’s financial actions and for greater transparency and public oversight of the royal budget.

The most recent protests come almost two weeks after Thailand’s Parliament rejected a proposal to amend the constitution that could have paved the way for monarchical reform. Instead, the joint chamber voted to move forward on two proposals for constitutional reform that didn’t touch changes to the monarchy.
Despite the King telling CNN and Channel 4 that “Thailand was the land of compromise,” authorities appear unwilling to do so. Protesters are now running out of legal avenues to achieve their demands.

Sunai Phasuk, Thailand senior researcher at Human Rights Watch, said the revival of lese majeste “is a clear message that those questions are not going to be tolerated and there will be no compromise with demands.”

“As pro-democracy protesters break the longstanding taboo that prohibits Thai people from criticizing and challenging the monarchy, reactions from the state are becoming harsher and harsher, sending the country further into an upheaval,” he said.

The Thai Lawyers for Human Rights reported that between July 18 and November 13, at least 175 people had been prosecuted for taking part in political protests. Many face illegal assembly penalties but some protest leaders have been charged with sedition, which carries a maximum seven-year prison term.

Thitinan said the lese majeste charges are unlikely to take the wind out of the movement’s sails.

“The student-led protest movement is demonstrably horizontal, not easy to extinguish from the top. So the protesters will likely continue with their pent-up frustration at Thailand’s outdated political system that has led the country towards economic stagnation,” he said.

RELATED:  The foundation of China's economic recovery is 'not yet solid,' leaders say at a key planning meeting