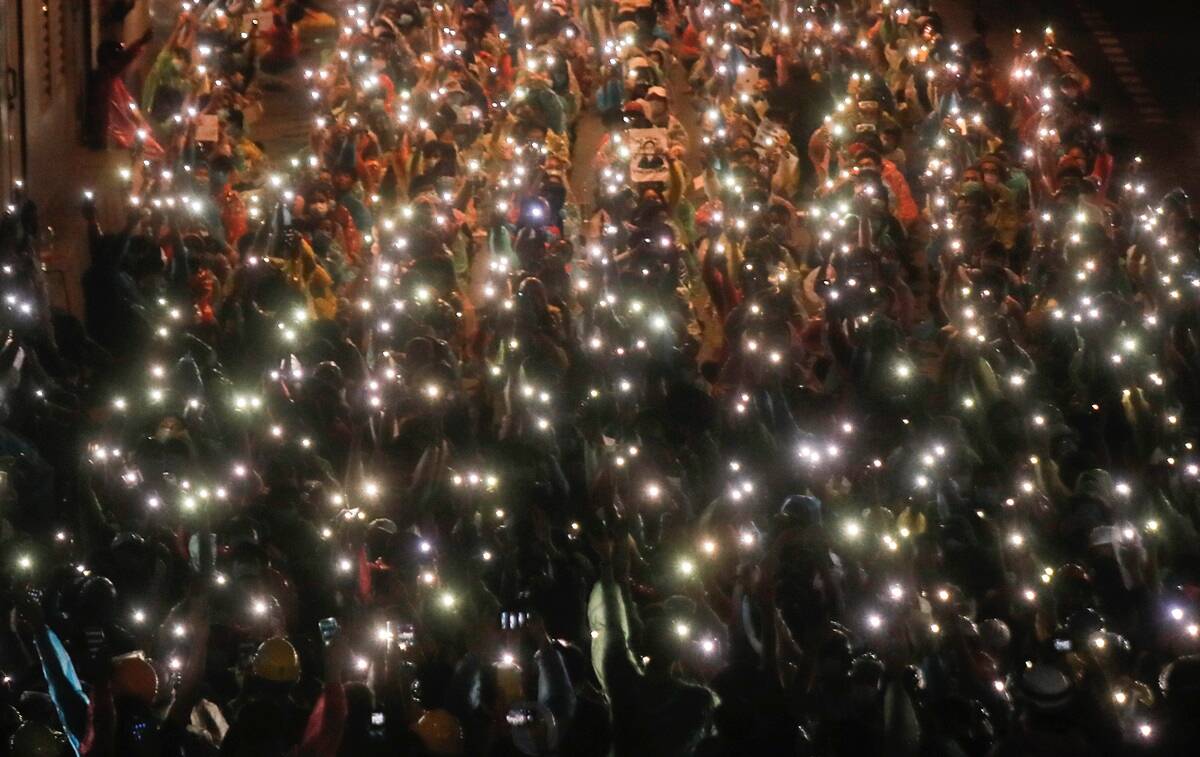 The potential for violence was illustrated after their last rally on Wednesday, when two men were reportedly shot and critically wounded. Although the incident remains murky and its connection to the rally unclear, it was a reminder that the student protesters are vulnerable, especially because of the passions they inspire among some of their opponents.

The protest movement’s core demands are for Prime Minister Prayuth Chan-ocha and his government to step down, the constitution to be amended to be more democratic, and the monarchy reformed to make it more accountable.

Their issue concerning the monarchy is the most controversial because the royal institution by law and tradition is virtually untouchable, and regarded by many as the bedrock of national identity. The military has declared defence of the monarchy to be among its foremost duties.

The protest leaders believe that King Maha Vajiralongkorn holds more power than is appropriate under a constitutional monarchy, and have made that the centrepiece of their campaigning in recent weeks. Although any criticism of the monarchy used to be taboo, speeches at the rallies – as well as signs and chants – include caustic words about the king and the palace.

In response, Thai authorities this past week escalated their legal battle against protest leaders, charging 12 of them with violating a harsh law against defaming the monarchy. The lese majeste law carries a penalty of three to 15 years’ imprisonment, but has not been used for the past three years.

Historically, defending the monarchy has been abused for political reasons. It has also triggered violence, most notably in 1976, when it led to the killings of dozens of students at a university protest against the return from exile of an ousted military dictator.

There is concern that if the government feels it cannot control the protests, which show little sign of abating, it may impose martial law or be ousted by the army in a coup.

Some speakers at the rally on Friday evening urged the crowd to take measures to resist any coup that might be launched.

“If a coup is staged, please tie a white ribbon in front of your house. If they take it away, we will just tie one back on again,” he said.

He said people should also abandon their cars in the road, declaring that “A coup cannot be achieved again as long as we come out and seize every intersection across the country.”

Resisting any coup attempt was the nominal theme of the rally, which began in a festival-like atmosphere that has marked many of the protest events.

Oversized inflatable yellow rubber ducks that became icons of the movement after they were used as shields against police water cannons were joined by balloons in the image of silvery space aliens. The balloons are displayed to mock accusations that foreigners  “aliens” fund and direct the protest movement.

Earlier on Friday, in another sign that the government was stiffening its crackdown, a television commentator who has been covering the protests said he had been summoned by police to face a charge of violating an emergency decree banning the rallies that was temporarily in force in October. The decree was ignored by protesters, with little attempt at enforcement.

Sirote Klampaiboon works with Voice TV, a digital TV and web station that is sympathetic to the protest movement. It has livestreamed all of the major rallies, and the government sought to shut it down but was told by a court that it improperly tried to do so.

Sirote said he was being bullied.

“I don’t know what I did wrong. I am not a protester. I went to the protest as a reporter. In my life, I’ve never done anything illegal,” he said on his TV talk show.