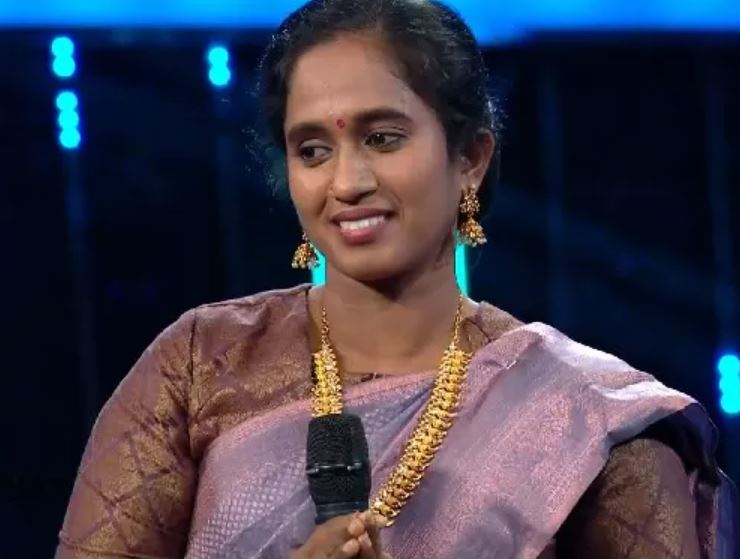 Thamarai Selvi is one of the contestants of the Bigg Boss Tamil Season 5. She is a south Indian drama artist, who has worked mainly in Tamil Language.

Thamarai Selvi has entered Bigg Boss Tamil house as one of the contestants on grand premier day, 3rd October 2021. In the first week, she was seen in discussion with Pavani to understand more about her career. In the latest days of the 1st week, all the housemates were divided into cooking team, housekeeping team, vessel washing team and washroom cleaning team. Thamarai Selvi was in the bathroom cleaning team. Later, on weekend episode on Sunday, 10th October 2021, on asking the contestants their opinion about washroom cleaning team, Raju Jeyamohan and other housemates appreciated the work done by her.

On the same weekend day, host Kamal Haasan gave a task, in which he asked each and every contestant to give like and dislikes with reasons to another contestant based on their observation in the past 5 days. At the end of the task, Selvi was shocked by the feedback given to her by the other contestants. At that time, Priyanka Deshpande encouraged her to be more confident in the game.

In the second week captaincy task, all the contestants had a balloon on their back, whenever the alarm sounded, they had to pick the needle and burst the balloons of the other contestants, the final housemate with the balloon would be the captain of the house. Finally, Thamarai Selvi won the task and became the first captain of the Bigg Boss house. Hence, she was not included in the nomination for the 2nd week elimination process as she became the captain. With the authority of captaincy, Thamarai was seen instructing the rules and regulations of the house and she also divided the housemates into different teams for performing the household chores. Later, she was seen in discussion with Akshara Reddy, resolving her doubts from Akshara regarding the discrimination on basis of color. Bigg Boss called the captain into the confession room to inform that the housemates were not following the rules properly, so she needed to make new rules to keep the house in proper manner.

During Oru Kadhai Sollattuma task, in which all the contestants had to share their life journey, Thamarai Selvi also narrated her story as the part of the task. She spoke that, she sacrificed her education and started working as a stage performer for survival of her family due to poverty. During those days, she had to face many insults, verbal abuse, and many more other obstacles to support her family financially. She also said that her first marriage could not become successful after having a son, Sivaraman, because of alleged harassment from husband and in-laws. Her second husband is Parthasarathy, who proposed to her but didn’t take responsibility of the family. She also showed thankfulness towards her mother-in-law for standing by her side in running and taking care of the family.

Further, she added about her son and broke down. Tahmarai revealed that she is not allowed to meet her son by her former husband’s family, who has manipulated her son against her so that he hates her, her son even doesn’t like to talk to her over the phone too. Thamarai said that she has entered the Bigg Boss house to share her painful story and to also popularize the folk art.

On the occasion of the Vijayadashami festival day, 15th October 2021, folk artist Thamarai Selvi, as the captain of the house, trained the housemates for various performances as instructed by the Bigg Boss.

During weekend episode, Sunday, 17th October 2021, host Kamal, asked the housemates, who amongst them watched the previous season of the Bigg Boss Tamil, then Thamarai, along with Imman Annachi revealed that they have watched Bigg Boss previous season, for which Thamarai and Imman got appreciation by Kamal Haasan.