Home News “That awful day could have been so much worse”: New videos show how narrowly rioters missed lawmakers

“That awful day could have been so much worse”: New videos show how narrowly rioters missed lawmakers 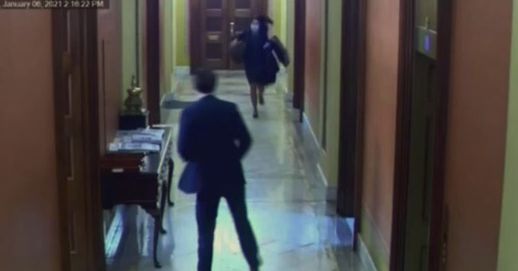 House impeachment managers — using previously unseen security footage from the US Capitol and a map of the building — revealed how close rioters came to confronting staffers and lawmakers on January 6, underscoring the threat that insurrectionists posed to everyone there.

These clips, shown during Democrats’ eight hours of argument in former President Donald Trump’s second impeachment trial Wednesday, revealed a series of near misses. Some of the most shocking included the moment when Sen. Mitt Romney (R-UT) nearly ran into attackers, and another when rioters almost found a group of eight staffers hiding in Speaker Nancy Pelosi’s office.

In one clip, Romney is seen trying to leave the Senate chamber only to inadvertently walk in the direction of the incoming rioters. Capitol Police officer Eugene Goodman happens to run into him and directs him to sprint the other way.

As Del. Stacey Plaskett (D-Virgin Islands) emphasized, the narrowness of such encounters matters because there were rioters present who seemed eager to do bodily harm to officials including Pelosi and then-Vice President Mike Pence.

“We know from the rioters themselves that if they had found Speaker Pelosi, they would have killed her,” she said, referring to statements that people had made about their intentions in the Capitol. Lawmakers including Romney, as well as other Republicans who refused to contest the certification of the election results, have also been the subject of significant blowback from Trump supporters, and may have been targets of violence, too.

There’s been previous reporting about how much worse the attack on the Capitol could have been given the zip ties and weapons that rioters brought with them — and these new videos were a stark illustration of just how close a call it was.

Democrats have emphasized the staggering consequences of the January 6 attack, during which five people died. And in their first of two days of arguments, they highlighted how the rioters had the potential to hurt even more people.

“We all know that awful day could have been so much worse,” said Rep. Eric Swalwell (D-CA). “You know how close you came to the mob. Some of you I understand could hear them, but most of the public does not know how close these rioters came to you.”

In a compelling series of arguments that included internal security tapes from the Capitol juxtaposed with videos posted by the protesters, Plaskett and Swalwell demonstrated how quickly rioters broke into the Capitol and moved toward lawmakers in the House and Senate chambers.

In one of the security clips Plaskett played, rioters approached the Senate chamber as Pence and his family were beginning to evacuate — and came close to their location. Around the same time, Trump was still disparaging Pence for refusing to challenge the election results, spurring his supporters to attack the vice president.

“The mob was looking for Vice President Pence — because of his patriotism,” Plaskett said.

Wow. Security footage I haven’t seen before lays out just how close the Trump mob came to having an opportunity to get their hands on Mike Pence pic.twitter.com/apUGBnwcte

Another video shows that rioters eager to find Pelosi almost stumbled upon a group of staffers hiding in her office. After they overtook the office, attackers were milling in one of the hallways and banging on doors, including the room where staffers had barricaded. Upon breaking into the room and encountering another door, the attacker in question leaves.

“You can hear the terror in their voices as they describe what’s happening to them as they are barricaded in the conference room,” Plaskett said, while sharing audio from the staffers.

Swalwell, too, highlighted close encounters that lawmakers had, playing video that showed senators evacuating just down the hall from the mob. “You were just 58 steps away from where the mob was amassing and where police were rushing to stop them,” he told the assembled witnesses-turned-jurors.

Absolutely stunning how close the rioters came to senators; new footage shows they were 58 steps away from senators as they were being evacuated. Schumer and his detail literally turned around and ran in the opposite direction as the mob was nearby pic.twitter.com/dUlcsNnaSB

Footage also underscored how now-Senate Majority Leader Chuck Schumer nearly encountered rioters while evacuating. It captures him running in one direction and abruptly turning around after seeing people ahead. “They came within just two yards of the rioters,” said Swalwell.

Newly released security video shows then-Senate Minority Leader Schumer being escorted down a hallway by his security details and then turning around and being rushed in the opposite direction.

Officers then barricade themselves against the door. pic.twitter.com/Nd6os6bKV7

Taken together, the videos indicated how narrowly lawmakers escaped from the Capitol attack — and underscored the violence that police endured while trying to protect them from it.