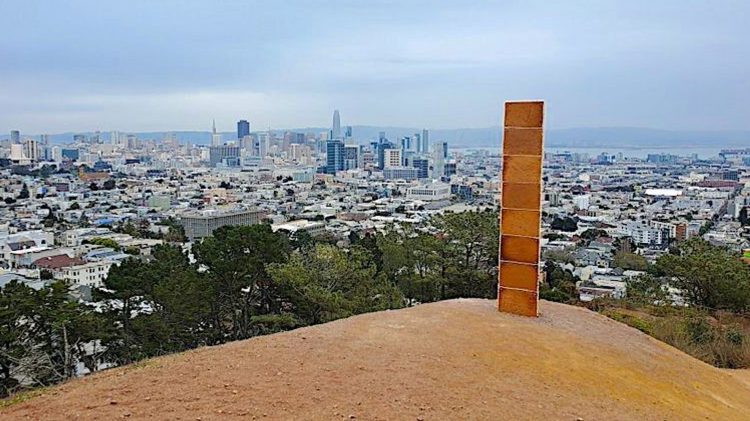 It could have been alien elves. There was no other immediate explanation for a seven-foot-tall gingerbread monolith that mysteriously popped up in a San Francisco park.

It’s not clear how edible the structure was, but witnesses reported the texture and smell of the monolith panels seemed to be the real thing — and it was decorated with frosting.

The monolith appeared early Christmas Day — on a hilltop in Corona Heights Park overlooking the Castro neighborhood. Its debut was highlighted by a rainbow.

Ananda Sharma, founder of the Gyroscope App, told local KQED public radio that he went for a run in the park early Friday and soon spotted what he initially thought was a “big post.” But as he ran closer, he could smell the gingerbread.

The structure was the latest in a series of monoliths that have appeared — and disappeared — from Utah to Romania. The San Francisco version appears to be the first made of a Christmas treat.

Gingerbread monolith atop Corona Heights in San Francisco this morning. And it was briefly framed by a rainbow to boot 🌈 ✨

Merry Christmas to all!!! ❤️🎄💚 pic.twitter.com/9xZHxqo7hh

Neighbors and even city officials enjoyed it.

Ginsburg said there were no immediate plans to remove the monolith, and it could stay — at least for the time being.

“Looks like a great spot to get baked,” Ginsburg quipped in his Best Coast style. “We will leave it up until the cookie crumbles.” He added: “We all deserve a little bit of magic right now.”

“I just thought it was hilarious,” said Raemond Bergstrom-Wood, a neighbor.

In the perfect act of SF 2020 defiance, there is an expertly-iced gingerbread monolith atop Corona Heights. Miracle? pic.twitter.com/Ik7LKf82MM