The 29 Most Hilarious Tweets About The Royals This Year 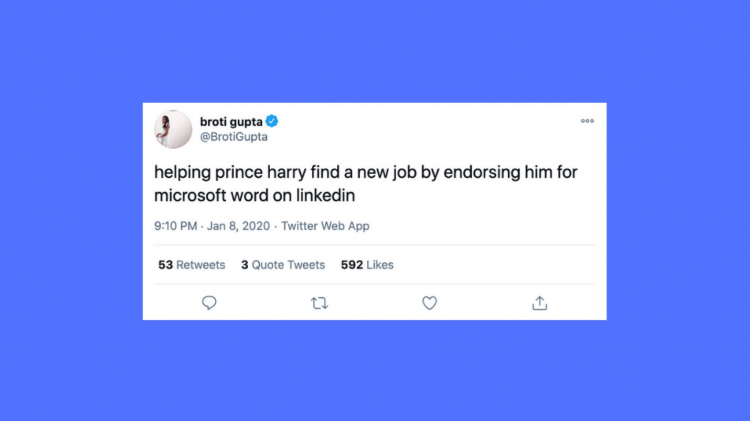 This has been a year full of chaos for everyone ― even the royals.

Prince Harry and Meghan Markle kicked off 2020 by announcing their decision to step back as working royals, signaling there would be a lot of changes ahead. And this was well before anyone saw the coronavirus pandemic on the horizon.

But amidst a year of turbulence, turmoil and sadness, Twitter users still managed to make us laugh.

We rounded up some of the best tweets about royals that struck our funny bone and ― in some cases ― were finger-licking funny.

The best reactions to Harry and Meghan’s decision to step back:

First time I’ve ever seen someone quit their family, saying it’s to spend more time with their jobs. https://t.co/iFBZokRXhX

prince harry energy is a new quality we looking for in men.

Meghan Markle holding a Deal or No Deal suitcase but inside it says “I will dismantle the monarchy” pic.twitter.com/LqCVpgjFD7

Imagine walking into work on Monday, your boss is like “you need to train the new guy” & you look over & it’s Prince Harry

You need to be so patient w him bc he has no employable skills; he doesn’t even know excel

proud of meghan markle for yoko ono-ing the royal family

a sitcom where Meghan teaches Harry how to do workforce things such as using Turbotax & meal prepping & filling out a W-1, please

The best reactions to Prince William staring at a KFC:

William whispered quietly to himself;

“Oh, I just can’t wait to be wing” pic.twitter.com/oKlQPiV3YJ

Find you someone that looks at you the way Prince William looks at KFC. #HisRoyalThighness pic.twitter.com/FawFPWaK8b

This would be my type of luck! Hungover, no makeup, scaring children as I looked terrible. Have my first KFC in a 6 months. Attempt to shove a whole burger in my mouth and Prince William or Catherine appeared waving through the glass 😂https://t.co/MZx89CGIAa

The best reactions to “The Crown”:

When did you realize you were hitting The Crown a little too hard, for me it was when I resolved to start collecting Princess Margaret-esque cigarette holders but for joints

I do have a sincere question. Why are all of our moms constantly talking about Diana? One time my mon CALLED me while I was in college, sighed, and started the conversation with “she was the people’s Princess”

The Crown season 22: the royals open an Arby’s in suburban Nashville and try to give this whole American thing a go

I hope Meghan Markle plays herself on the next season of The Crown.

And just the best random royals tweets this year, period:

the royal family should have a blooper reel!!!!!!! i’d kill for an america’s funniest home video compilation of the queen tripping over a cord & prince charles getting hit in the balls.

No one asks this of the Royals in interviews, so you’ll never get an answer, but I wonder what Buckingham Palace SMELLS like.

here i am meeting kate middleton mere hours after cutting my own bangs pic.twitter.com/dSjdpgVCEi

Subscribe to HuffPost’s Watching the Royals newsletter for all things Windsor (and beyond).