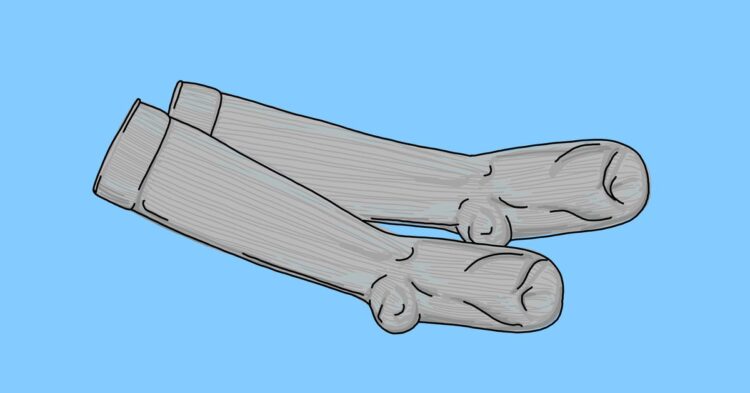 The day that my compression sock consciousness began to shift was a memorable one. This was not because of the socks themselves (they were rather plain), but because it was the same day that we pitched headfirst into a nationwide lockdown, and because it was my birthday.

I was in New Zealand at the time, and that morning, my boyfriend and I packed our bags into a rental car and got ready to drive the six hours to a house where we would be sheltering-in-place for the next several weeks. And before we left, as if by instinct, I slipped on my compression socks.

There was not much forethought to the decision. The socks were, at that point, just a utilitarian accessory, one purchased for $15 many months before to ward off the swollen ankles that had begun to plague me during long-haul flights. But in the sun, with my feet propped up on the dashboard, they seemed like a symbol of something. Pragmatics? Maturity? Paranoia? We listened to the radio as we drove, re-tuning each time the news bulletins blared their warnings yet again.

Later that night, after we arrived, tired and worried about our families, thousands of miles away, I responded to my friends’ birthday wishes, telling them I had “put on eye cream and compression socks that morning with a new appreciation.” It was a joke, but it was also a premonition — a shade of habits to come.

I’ve always been interested in uniforms. Mostly, I’m interested in uniforms that are not exclusive to work or to school but are rather a reflection of an individual’s private life and pursuits. I’m interested because I want one and I don’t know how to get it. I’m haunted by Jo March’s scribbling suit, an artist’s linen shirt, and the cuffs in a pair of dark wash Levis worn by a man I used to know. I thought, for years, that I was in love with every skater and surfer that I met until I realized I was just jealous of the way they dressed.

I wore a lot of clothes in my teen and preteen years that made me feel particularly bad. I was too tall for most jeans, too flat-chested for most tops. I hated tight clothes but wore them anyway — it was, after all, the late aughts. What this meant was that I ended up feeling most comfortable when I was out of my everyday clothes: in the costumes I wore on the stage of our high school theatre, or in the jersey and shorts I wore for cross-country and track. In them, I was at ease. They expressed something truer about who I was than American Eagle jeans ever could.

Eventually, a few years later, I found a piece of clothing that delivered that same security. I’d wear them, the overalls, stomping through the streets of New York, feeling calm and invisible, swathed in thick, ballooning denim. “Could this be it?” I asked myself. I considered a life lived entirely in overalls, coveralls, and related one-piece garments. I never fully committed, but I held on to that feeling.

I thought, for years, that I was in love with every skater and surfer that I met until I realized I was just jealous of the way they dressed

But then, many months after those first few strange weeks of lockdown, back home in my apartment in Berlin, I looked down at my legs in the anemic light of a November morning. I observed the tight swoop of cotton-nylon blend — curving from below my knee, cupping my calf, then falling into the hollows of my ankles until finally disappearing into the muddy brown of my loafers — and I saw that my compression socks had become more than just a punchline to my late 20s. This was a real bond. Me and my compression socks, my compression socks and me, locked in a daily dance of dependence. I had found my uniform for the course of the pandemic.

Like all uniforms, my socks were about control — or rather, a fantasy of control. For many of us, much of the last year has been spent in relative isolation, trying to figure out how to mark the transitions between work and (sad excuses for) “play”— to create distinctions, in other words, against the mushy sameness. Some have spoken about the importance of “getting dressed” in order to claw back a small sense of normalcy.

For me, my socks, slipped on each morning before another long day of sitting behind my screen, have given me something else: the fleeting impression of containment. A feeling of order, but also of intimacy. In a year largely lacking in hugs, they were a day-long, unending embrace. (Maybe just for my lower legs, but do they not deserve love too?)

This could be read as a sign that I should invest in the corset trend, or that maybe I should seriously consider latex couture. (I do live in Berlin, after all.) Still, I’ve never outgrown my general dislike of tight clothes — I’d rather billow — and I can’t stand the feeling of bare skin against seat belts or leather couches. That said, my socks do sometimes have a transformative effect. They don’t just keep my feet warm: they are also my metaphorical shield against the unhealthy pandemic-era behaviors that I’ve developed. My preferred form of undemanding, uninvolved self-care.

On the days when I feel too leaden to leave the house for a walk; during the weeks when my skincare regime consists of little more than washing my face before bed and trying to drink enough water, my socks are there for me: a medically condoned preventative measure. I don’t consider them a replacement for the healthy habits that have lapsed, necessarily, but they do help keep at bay some of the shame. You are doing something good for yourself, they seem to say. And one day, when they are back out in the world, back in whatever version of “normal life” will come after, your legs will thank you.

In some ways, this may actually turn out to be true. To varying degrees — depending on the level of pressure, or mmHg value, of the “leg” of the sock — compression socks can do a whole bunch of good. (A bit of preliminary research should be done into which pressure and length best suit your body and your needs.) Since at least the 1930s, they have been used to improve blood flow, help prevent varicose veins, and reduce the chances of getting blood clots and deep vein thrombosis (DVT).

In recent years, benefits of use for athletes (in particular, runners) have meant that these socks, long defined by various shades of beige, have received the performance wear treatment. As a result, most pairs I’ve come across exhibit all of the characteristics of the wider category of athletic socks: overt ribbing, exaggeratedly reinforced heels, and inexplicable detailing, as if someone has taken crime scene chalk to the foot and calf. They are, in other words, generally ugly things.

Of the uniforms I’ve had in my life, elected or otherwise, not all of them were a success. There was the one I had to wear, for example, to my job at the college gym — staticky sweatpants and a purple polo shirt (bad). And the one I designed for myself the summer I was back home, working a restaurant job: a series of short-sleeved Hawaiian shirts, cycled throughout the work week (also bad).

But despite these failures, I still dream of the next one. I’ve considered monochrome. I’ve considered pantsuits. I look to a future where the perfect uniform and I will finally cross paths. Until then, I have my compression socks. My constant companions, my ugly little secret. They may not be the stuff of dreams, but right now, it feels good to invest in a garment whose primary focus is to take care.

Sami Emory is a writer whose work has appeared in the New York Times, the Baffler, Men’s Health, and elsewhere.