Home TechnologyGadgets The best Apple Watch accessories you can buy

The best Apple Watch accessories you can buy 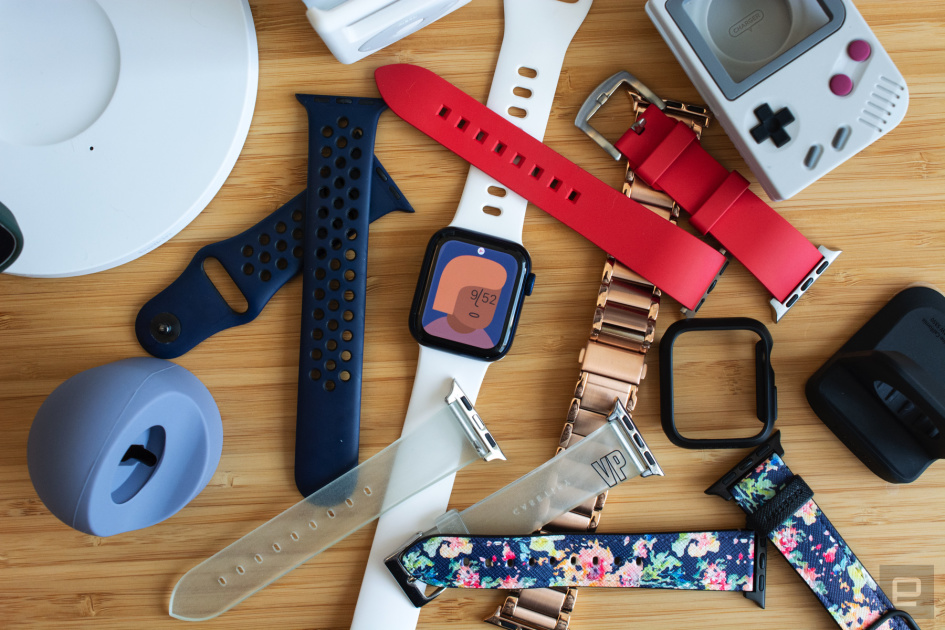 While plenty of us use cases to protect our smartphones from drops and scrapes, you may not think to do the same for your smartwatch. After all, a device that’s literally strapped to your body isn’t as prone to accidental drops as a device that moves in and out of your pocket all day. But in the years since I started wearing an Apple Watch, I’ve knocked it against door frames and countertops more times than I’m willing to admit. A case is a good option if you don’t want to take any chances with that $350+ smartwatch on your wrist.

“Cases” are basically bumpers that surround the edges of the Apple Watch, and some of them even cover the screen. I personally prefer a bumper-style case because, if I’m going to cover the display, it’ll be with a dedicated screen protector (we’ll get to those in a bit). Spigen’s line of Apple Watch cases are solid and they come in two different levels of bulk. The Rugged Armour series has a shock-absorbent layer and raised bezels, making it best for those who prioritize protection over fashion. Spigen’s Thin Fit series is more my speed — it sits flush against the Watch’s display, but still gives you an extra layer of protection. You can even choose a color that matches your Watch to help it blend in. Two added perks of Spigen’s cases are that they snap on quickly and easily, and they’re quite affordable at around $13 a piece.

If you don’t want the extra bulk that comes with a case, a screen protector will give you a least a bit more of a safeguard than sporting a naked Watch. Zagg’s InvisibleShield line is a reliable one that has a few options to choose from. We recommend the Glass Fusion series for the best defense as it uses hybrid glass to absorb impact and disperse shock before it reaches the Watch’s display. The films are also smudge-resistant and sport chip-proof edges.

The Ultra Clear+ line is an alternative that provides similar protection but also has antibacterial technology that kills common surface germs. Zagg also includes clear instructions, cleaning tools and a small squeegee applicator in the box to make it easier to install their screen protectors. When installed properly, these screen protectors are as close to invisible as you’re going to get.

Now, most of us haven’t been traveling a lot recently, but it’s worth considering a travel case for the Apple Watch if, under normal circumstances, you’re often away from home. There are plenty of electronic organizers like those from Bellroy and Bagsmart that work just fine if you don’t mind keeping the Watch in the same space as your smartphone, earbuds and the like. But Twelve South’s TimePorter is a great option if you want a portable home just for the Watch. It looks like an eyeglasses case with a small hole in the lid into which you stick your Watch charger. Inside the case, the charger’s cable snakes neatly around the edges and can come out through holes on either side. Just plug the end into a power adapter or a portable battery and then you can sit your Apple Watch on top of the case to power it up.

In addition to keeping the Watch charger neat and contained, the TimePorter also has space in the middle for things like extra watch bands or even a lipstick-sized portable battery. When you’re not wearing the Watch, it easily fits inside the case as well. If you only take one or two flights a year, then the TimePorter is probably overkill. But it will be useful for frequent travelers who want a safe space for all of their Apple Watch accoutrements.

New Apple Watch owners will find that tiny magnetic charging disk in the box, but no adapter. In an effort to reduce waste, Apple removed it from the box of most new Apple Watches. Chances are you already have an extra USB-A adapter lying around your home somewhere, but if you don’t, we recommend picking up a new one that can speedily charge any mobile device you throw at it.

Anker’s PowerPort Atom III with GaN tech is a good option because it has a 15W USB-A port for your Watch plus a 45W USB-C port that works with iPhones and MacBooks (and other USB-C laptops). The gallium nitride technology helps keep the charger compact and cool even when powering up laptops at its max speed. If you’d rather something even smaller, both Anker and Aukey have foldable adapters with two USB-A ports that can easily live on an outlet in your living room or be thrown into a bag when you’re on the go.

Speaking of being on the go, any portable battery pack with a USB-A port should do just fine if you need to top up your Apple Watch while you’re out. We like these from Anker and RAVPower as all-purpose batteries thanks to their high capacities and multiple ports. Belkin even makes a power bank that has a built-in magnetic disk to charge the Apple Watch, making it a good option if you don’t want to carry the Watch’s original cable with you.

Investing in a second Apple Watch charger might be best for those who want to leave it in their travel bag so a spare is always with them. If you do so, we recommend going straight to Apple for this (thankfully a replacement or second charger will only set you back $29). In my research, I couldn’t find a replacement made by a reputable company. There are plenty of knock-offs available on Amazon, but be cautious when purchasing from a company you’re not familiar with.

If you want to use the Apple Watch’s handy Nightstand mode while it’s charging, I’ve found that Watch holders can make the experience much better. My Watch often topples over or rolls about when I simply trust it to sit on its side next to my bed, but that’s easily fixed with a stand. Both Spigen and Elago make decent ones, and I’ve found the former’s options to be a bit more practical than the latter’s. Spigen’s S350 stand is basic yet solid — it’s a small L-shaped piece of soft-touch plastic into which you snap your Watch’s charger and prop up the timepiece. I like that the charger is quite secure in its small hole and the stand is fairly weighty. The base can also stick to flat surfaces if you remove the film that’s on the bottom.

Elago’s stands have more personality, coming in colorful dome shapes and in the forms of retro tech. The dome-shaped stands are even more basic than Spigen’s and they are a bit lighter, which means they’re prone to sliding around on your nightstand if there’s tension on your charging cable. But they hold the Apple Watch well and, at under $15, they’re affordable ways to inject more personality into your accessory game.

But if you get a headache just thinking about all those individual charging cables dangling off your nightstand, it’s worth considering wireless chargers — specifically those that can power up a few gadgets simultaneously. Mophie’s 4-in-1 wireless charging mat handles almost any Qi-capable device you throw at it with spaces to power up to four of them on its flat surface. It also comes with an Apple Watch attachment that, when equipped with the original magnetic charger, props up your timepiece so you can see the screen easily while it’s powering up. Belkin’s Boost Charge Pro stand has a slightly smaller profile because it uses vertical space rather than horizontal, propping up your Watch and a new iPhone with MagSafe capabilities on their own, separate stands. The circular base that holds them even has a spot for a pair of AirPods to wirelessly charge, too.