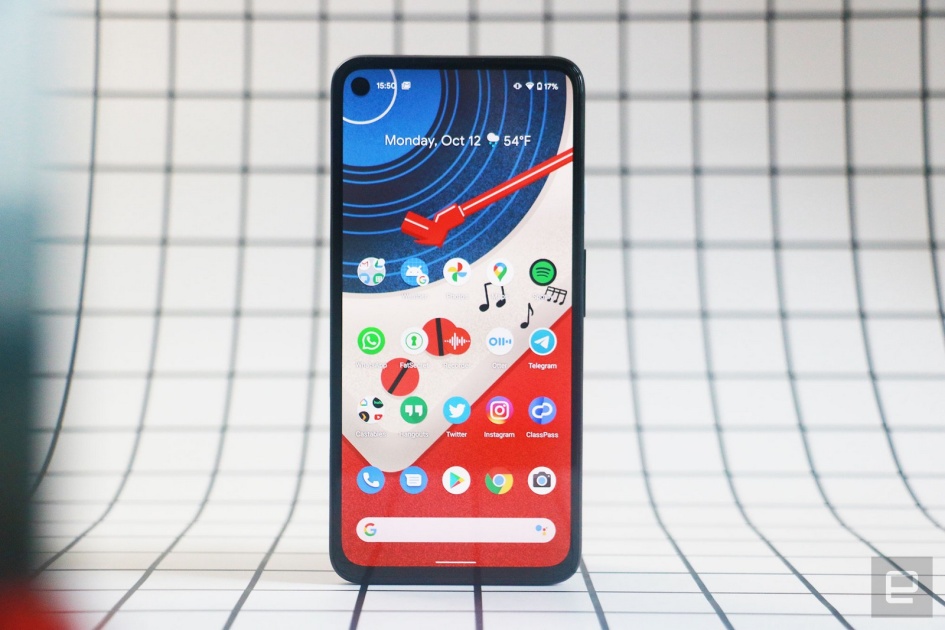 If you prefer a more refined design, consider a leather case. This one from Bellroy gives the phone a streamlined look, plus it’s made out of a gold-rated tannery leather that should wear well over time. It comes in a variety of colors; we’re particularly fond of the forest green hue. On the other hand, if you don’t want to spend too much on a case, the Spigen Ultra Hybrid is also a good choice and it only costs $14. It offers just enough protection to preserve the Pixel from minor mishaps while maintaining an impressively thin profile.

If you want to ensure that your Pixel 4a 5G is free of scratches and scuffs, then it’s a good idea to get a screen protector. This one from EGV comes with not just one but three screen protectors so you have backups just in case you need them. The kit also comes with cut-out protectors for the rear camera plus an alignment frame to make sure they are installed correctly. Each screen protector is made out of 9H tempered glass that should be sufficient enough to protect against minor scrapes and drops. Its oleophobic coating resists fingerprints and there’s also extra space left around the edges to accommodate most cases.

Even though Google’s initial attempt at wireless earbuds didn’t go so well in 2017, the latest version is vastly improved. While the 2017 model still had a cord connecting the two earbuds, this year’s edition takes the form of “true wireless earbuds, making them a more direct competitor to Apple’s AirPods.

Perhaps the most exciting feature of the Pixel Buds is its near real-time language translation. Thanks to Conversation Mode in the Google Translate app, you can use the earbuds to help you speak or understand over 40 languages. Just say “OK Google, help me speak Spanish,” press and hold the earbud, speak your words, and the Pixel 4a 5G will translate them for you.

Pairing the Pixel Buds to your Pixel is automatic, even if you’re doing so for the first time. When connected, the phone will show you the current battery levels of the earbuds plus the charging case. The comfortable buds also offer solid audio and reliable touch controls according to our review.

If, on the other hand, you simply want the best audio quality, consider the Jabra Elite 85t. We’ve been big fans of Jabra’s wireless earbuds for years now, and it’s no different with the Elite 85t. Not only does it have active noise cancellation, but it lets you customize just how much environmental noise you want to block. In our review, senior editor Billy Steele said that the noise cancellation is so powerful that it rivals some of the best earbuds he’s tested.

In addition to its great noise cancellation, the Elite 85t also has excellent audio quality. It has 12mm speakers, which results in a deep bass and a great amount of depth compared to its predecessor. Billy also praised the ability to customize the earbuds controls using the companion app; there’s even a “white noise” feature here. Plus, the Elite 85t has wireless charging that’s compatible with any Qi-certified pad. Yes, it’s pricier than some other earbuds out there, but it’s also one of the best.

For those who would rather not spend a lot on earbuds, Anker’s Soundcore Spirit Dot 2 is a great alternative. It can be found for around $80 and delivers satisfying audio quality and deep bass for the price. Billy Steele also pointed out that this was even more impressive considering how small and lightweight they are.

He called the audio well rounded, with decent depth and clarity. No, it’s not as immersive as pricier earbuds, and you do miss out on an adjustable EQ, but for the price, the Spirit Dot 2 punches well above its weight. Plus, it’s IPX7-rated to be waterproof, so there’s no need to worry if it gets a little wet.

We should note that Anker has two low-cost earbuds, the Spirit Dot 2 and the Spirit X2, both of which are around $80. Billy even prefers the audio quality on the X2. But we agree with him that the X2’s hook design probably isn’t for everyone, especially when compared to the more popular true wireless bud design of the Dot 2. Still, if the hook design doesn’t bother you, and you see yourself only wearing these when working out for example, you might consider the X2 as well.

If you see yourself using your phone as a way to listen to music outdoors, we recommend a portable Bluetooth speaker like the Sony XB23. The XB23’s dual bass radiators deliver incredible audio for its size, thanks in part due to their oval-shaped diaphragms. (The company claims that this results in increased sound pressure and reduced distortion.) The XB23 features Sony’s Live Sound mode, which simulates 3D audio and increases its immersive factor.

Since it’s meant for the great outdoors, the Sony XB23 is IP67 rated to be dustproof, water resistant and rust proof. The company also says it’s shockproof, which essentially means it’s durable enough to withstand the occasional knock or bump (which is pretty important if you have it outdoors). The XB23’s battery is rated for up to 12 hours, which should be more than enough time for your soiree.

Though the Nest Audio isn’t strictly a phone accessory, we still think it works well as a smart speaker to complement your Google-powered lifestyle. Plus, you do need a phone to get it up and running anyway (via the Google Home app), which you can easily do with the Pixel 4a 5G. Aside from playing music via streaming services, you can also use the Nest Audio as a Bluetooth speaker for your phone.

Like other Google-powered speakers, you can use the Nest Audio to check the weather, control your smart home and, as mentioned, play tunes. It delivers  great audio quality despite its small stature, and if you buy two of them you can set them up in stereo. They come in five colors and are reasonably priced at only $100 each.

Even though the Pixel 4a 5G has decent battery life, an additional battery pack is never a bad idea. We especially like the Anker PowerCore III Sense 10K USB-C Power Bank for its 10,000 mAh capacity plus its super-slim profile — it’s actually even more slender than the phone itself and it weighs only around 10 ounces. Though it’s clad in a stylish tweed finish and a variety of colors,

It comes with both a USB-C port plus a USB-A one, which you can use to charge two devices simultaneously. If you want to charge your Pixel as fast as possible though, we recommend using the USB-C port for the 18W power delivery, which we found was able to deliver nearly 80 percent power to our Pixel 4a 5G  in just under 30 minutes. On the front is a button with a five-dot LED battery indicator.

Phones can typically take a while to charge, so fast chargers like Anker’s PowerPort III Nano are always a wise purchase, especially since they’re universally compatible. The Nano can provide up to 20W of charging to your Pixel and it’s also USB-C compatible so there’s no need to purchase an extra cable. It’s compactly built, too, and fits most outlets without hogging too much space. Alternatively, the Aukey Omnia Mini also offers 20W USB-C fast charging and supports Quick Charge 3.0 on the Pixel 4a 5G. It’s similarly compact and travel friendly, and works with a wide array of devices.

In addition to a fast charger, we suggest getting a high-speed compatible cable to go along with it. We definitely recommend getting one that can serve multiple purposes. The Anker PowerLine III, for example, can be used with not just the Pixel 4a 5G but also a USB-C laptop like the MacBook Pro. Plus, the PowerLine III is super study, with a quadruple bulletproof fiber construction that can supposedly withstand up to 25,000 bends. Though it’s a small thing, we also like that it has a textured connector so it’s easier to grip when connecting or disconnecting the cable.

Not every car has a USB port, and even if yours does, that might not be the case in a rental vehicle. That’s why a car charger like the Nekteck USB Type-C charger is so handy. It’s compatible with a wide array of USB-C products and offers Power Delivery, so you’re able to charge not just your Pixel 4a 5G but also a Chromebook, a MacBook and more. It also has a USB-A port in case you need to charge another device at the same time. The Nekteck comes with a USB-C cable as well just in case you need it.

The best Pixel 4a 5G accessories