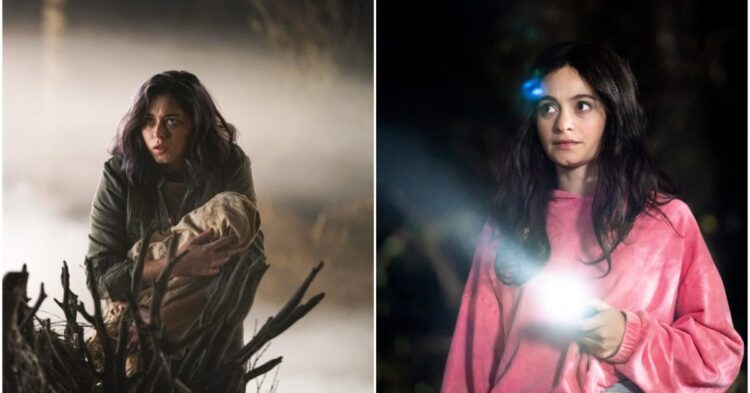 The Facebook Watch series The Birch combines teenage angst and horror while bringing attention to the struggles of growing up through adolescence. The premise centers on a troubled youth who summons a druidic demon known as The Birch, acting as a guardian of vengeance maiming and murdering those against those who dare harm its summoner. In season one, Evie Grayson (Xaria Dotson) finds out first hand the consequences of acting out of her pain when bringing the creature into the world. I spoke with Dotson and Jordyn DiNatale (The Irishman), who plays Rory, the latest to call upon the creature to confront her bullies and what to look forward to in the second season.

“[Evie] starts off in season one as someone who’s very quiet, very vulnerable, and ends up joining up with the Birch, calling on her as sort of an act of taking on instances of power and regaining some power,” Dotson said. “It turns out that it’s a false sense of security and support. And [the creature] is slowly taking advantage of her and using her anger to just wage war on all these other people in each story. So now that we are coming back to Evie’s storyline [in season two], she has been trapped in this realm and she wants to find whoever is calling on it next and stop that because she doesn’t want her to experience the same pain that she suffered through. She doesn’t want them to experience the same sort of wrath that the Birch placed upon her. It’s going to be interesting to see how she attempts to go about stopping [the creature] and how she goes about contacting Rory, this new character that we see that Jordyn plays and how that interaction goes down. Evie doesn’t view herself as any sort of hero or anything. She’s definitely going into it as trying to atone for what she’s done.”

As Rory, DiNatale fell into a familiar position that Evie went through the previous season, and catching up helped give her a place of reference and empathy for the character. “I was sent [during] the audition and I was really intrigued by it, and so I went and watched the whole first season,” she said. “I binged it in one night and I also watched the short film based on in 2016 about the Birch. It really helped me get into, you know, first of all, figure out what was going on. I was like, ‘What is this tree monster and what is happening? And then after I figured out what’s going on, I realized that it’s way more than just like a scary story. There’s a lot of depth to these characters and a lot of pain that they’re going through. Watching the first season really helped me tap into all of that. So I knew what to bring to my character.”

DiNatale’s Rory finds trying to become a social influencer came at a cost. “I think a lot of people can relate to what Rory’s going through with cyberbullying and all of that because it’s just so prevalent right now with social media,” she explained. “I have experienced some forms of bullying throughout my life. And so on that level, I was able to connect with Rory and kind of get in her head and everything. And just like that need for some love from the people around her that she’s really not getting. She’s speaking out and she’s trying all different things, like trying to dress in different ways that she thinks is cool and, you know, trying to reach out to different kinds of people in her circle. And all this is kind of like backfires on her and spirals into just terrible mean comments online.”

When it comes to the growth of Evie, Dotson broke down how “I mean, sort of I know that a lot of people relate to Evie and her plight, especially in season one and season two, we see her develop and struggle. So I don’t want to spoil too much of what happens there. But I know that she does harbor a lot of sadness and she really struggles with bearing the weight of the decisions that she’s made. She really blames herself for it. And in season one, she had to deal with physical bullying and having her life threatened and the life of her family threatened. And that was something she harbored and kept to herself. And she was very isolated because she felt like she had no one to turn to. And I think a lot of people relate to that aspect of her story. I can definitely say that I relate to a certain percentage of who she is as a person when it comes to her being just like a quiet natured person and her connection that she has with nature; and how she sort of turns towards this seemingly benevolent creature of the forest as a protector. I think a lot of people wish they had someone like that on their side. But of course, in this case, that character turns out to be someone that’s using her as well. It’s a tragic story. I know that a lot of people have a lot of care for and love Evie to provide to identify with her. And they want to see her succeed and they want to see her triumph over this evil.”

Throughout shooting, it turned out Dotson and DiNatale shared some similarities when getting into character like a playlist with some mutual tracks to get into the mood of the series. The Crypt TV horror series’ second season courtesy of Jane Casey Modderno, John William Ross, and Cliff Wallace is now streaming on Facebook Watch.