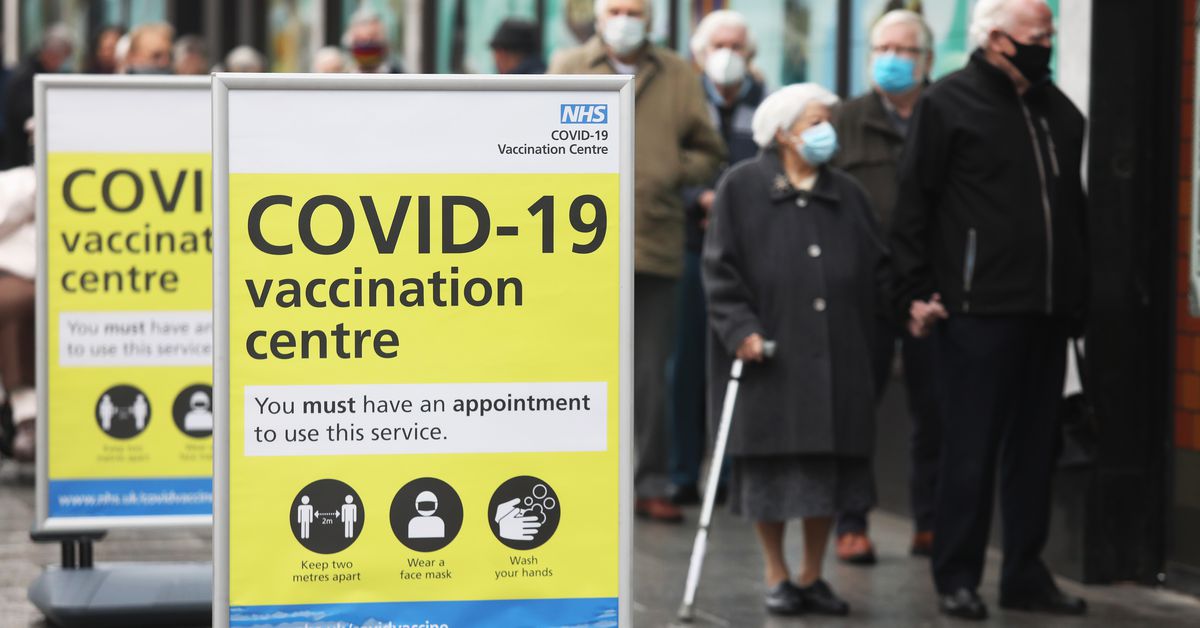 A spat between the European Union and the British-Swedish pharmaceutical company AstraZeneca is threatening to hamper global vaccine efforts and raising tensions on the continent as European countries struggle to vaccinate their populations amid the threat of new, more virulent strains of the coronavirus.

The EU purchased 400 million doses of the AstraZeneca vaccine, which the company made in partnership with Oxford University, in advance of it being approved by EU regulators. But last week, AstraZeneca abruptly announced that due to production issues it would only be able to deliver about 40 percent of the total promised in the first quarter, or about 31 million doses, to the EU.

That, of course, angered EU leaders, who are desperately trying to inoculate their populations.

Reuters reported Friday that the company agreed to throw in another 8 million more doses — but the EU says that’s not good enough and is demanding AstraZeneca do more, including utilizing its plants in the United Kingdom to make up the shortfall.

AstraZeneca says it can’t do that, and that its contract with the EU (a heavily redacted version of which was published Friday) requires only that it make the “best effort” to deliver the vaccines to Europe. The problem is that the EU and AstraZeneca disagree on what “best effort” actually means.

And now the fight is threatening to spill over, with alarming implications for the global vaccination effort.

On Friday, the European Union approved the use of the AstraZeneca vaccine. But it also took the dramatic step of putting export controls on all coronavirus vaccines.

The final regulation is expected to be published Saturday, but it will require vaccine makers to notify the EU when exporting coronavirus vaccines to most countries outside the European Union; more than 90 countries are exempt, but not the United States or the United Kingdom. Individual EU member-states will then have to authorize those exports, and can block them if they believe companies exporting the vaccines aren’t making good on their own delivery deals with the EU.

It’s not an outright ban on vaccine exports, and they are only expected to last until March, but experts and observers worry it sets a troubling precedent.

There are now several vaccines available, and more promising candidates on the way. But the EU-AstraZeneca feud is the latest sign that global cooperation and solidarity on vaccine allocation is failing, said Rebecca Weintraub, faculty director of the Global Health Delivery Project at Harvard University.

“This is vaccine nationalism 101,” she said.

The EU was slower to sign a deal with AstraZeneca than the US and UK. That delay may be causing problems now.

The European Union, on behalf of its 27 member-states, made deals with a vaccine makers, betting on a bunch of potential candidates and buying up doses in advance. In total, the EU purchased 2.3 billion vaccine doses from a handful of companies.

But, initially, richer EU members like Germany, France, Italy, and the Netherlands began to negotiate deals with vaccine makers themselves, including with AstraZeneca. “That caused a lot of friction in Europe,” Christian Odendahl, chief economist at the Center for European Reform, told me. “If you’re integrated both politically and economically, you don’t want to be vaccinated and your neighboring country to not be vaccinated.”

The bloc needed to ensure that smaller, less wealthy member-states without big purchasing power would also be able to get vaccines. The solution? Have the European Union itself take over the vaccine buying process for all of the member-states.

“But,” said Paulette Kurzer, an expert on European politics and public health at the University of Arizona, that also turned the whole thing into “a very bureaucratically cumbersome process.” The EU had to consult with the individual governments and balance all their interests. Other issues, like liability protection and the cost of vaccines, also slowed discussions.

The European Union did finally strike those deals, with AstraZeneca and other vaccine makers, but it was a later in signing that AstraZeneca contract than others, including the United Kingdom.

Fast forward to December, when the United Kingdom became the first country in the world to authorize a vaccine (the Pfizer-BioNtech one) for emergency use. The US soon followed, but EU approval didn’t come toward the end of December.

Already a few weeks behind some of its counterparts, the European Union’s vaccine campaign has stayed sluggish compared to places like Israel and the United Kingdom.

A shortage of doses has meant EU countries have had to scale back the pace of inoculation; Madrid, Spain, for example, is halting its vaccination program this week. Germany’s health minister has said shortages may persist through July.

New doses from AstraZeneca would ease some of this pressure. But then came the bad news, when AstraZeneca indicated it would fall short of its initial commitment.

AstraZeneca CEO Pascal Soriot, in an interview with Italian newspaper La Repubblica, said that the company was working “24/7” to fix the “glitches” in its European production.

“But the UK contract was signed three months before the European vaccine deal,” Soriot said. “So with the UK we have had an extra three months to fix all the glitches we experienced. As for Europe, we are three months behind in fixing those glitches.”

The EU, though, has insisted that under the terms of the contract, AstraZeneca must use its manufacturing facilities in Britain to supply the EU with its share of doses. But AstraZeneca says it must first fulfill its obligations to the United Kingdom before it can supply Europe or anywhere else. Right now, it’s delivering about 2 million doses per week to the UK.

On Friday, AstraZeneca released its purchase agreement with the EU to try to help clear up the confusion. But that didn’t do much to resolve the dispute.

European Commissioner Ursula von der Leyen said Friday it’s “crystal clear” that the contract says AstraZeneca has to use British factories to supply the EU since its EU production is stalled.

AstraZeneca, again, is saying that the contract says it has make its “best reasonable effort” to fulfill the dosage orders, and it says that is what it is doing.

So the stalemate between the EU and AstraZeneca remains.

In some ways, the details of the contract are beside the point. The European Union — which is facing a lot of pressure from its member-states — is desperate to deliver these vaccines to its citizens. And, as completely expected, the global demand for a vaccine is vastly outstripping the supply and the pace at which companies can produce them.

The European public is frustrated with the vaccine rollout. They see other countries getting vaccinated faster. Individual member-states are in charge of vaccination rollout and distribution in their own borders, so blaming the EU for botching up the procurement process is a good way to deflect some of the blame from their citizens.

And AstraZeneca — with additional factories located so tantalizingly close in former EU member-state the United Kingdom — is a useful target for the EU to transfer that blame one step further.

The EU is using its power to try to get vaccines, at whatever cost. This is the exactly the type of vaccine nationalism the world feared would happen.

The EU’s threat to block vaccine exports could directly hurt the UK, which relies on a plant in Belgium for its Pfizer vaccine doses. But other countries, like Canada, have raised concerns over whether their supplies could be affected, too.

The biggest fear is that this could be the first domino to fall, as other countries feel they need to act in their own interest, and maybe block exports, or withhold raw materials — whatever leverage they can use to try to muscle vaccine doses for their populations.

“Our supply chains are global,” Julie Swann, an expert in health systems and supply chains at the North Carolina State University, told me. “While the manufacturing of a supply chain may be in one part of the world, the raw materials or consumables or assembly may be in a different location. This path is potentially dangerous to push as a main strategy.”

Experts said the world could see a reprise of the early days of the pandemic, when some 80 countries or customs territories banned or put restrictions on the export of supplies.

“This could reignite the “beggar-thy-neighbor” policies that characterized the early days of the pandemic with regard to personal protective equipment, ventilators and other medical supplies,” Thomas J. Bollyky, senior fellow for global health, economics, and development at the Council on Foreign Relations, said.

The EU may perceive this decision to be in its self-interest. But if other countries follow suit, it could backfire — on the EU, and the rest of the world. Because it will almost certainly prolong the pandemic.

“It’s making more and more clear, the huge chasm between what people are saying and what they’re doing,” Krishna Udayakumar, Director of the Duke Global Health Innovation Center, told me. The EU, in particular, he said, was seen as a leader in global health equity. It’s given a lot of support to Covax, the multilateral effort to help poor countries get vaccinated. And yet, everyone is still looking out for themselves.

“At the the end of the day,” he said, the EU is “doing whatever they can to get access to vaccines as quickly for their own population as possible.”