The exponential rise in Covid-19 hospitalizations, in one chart 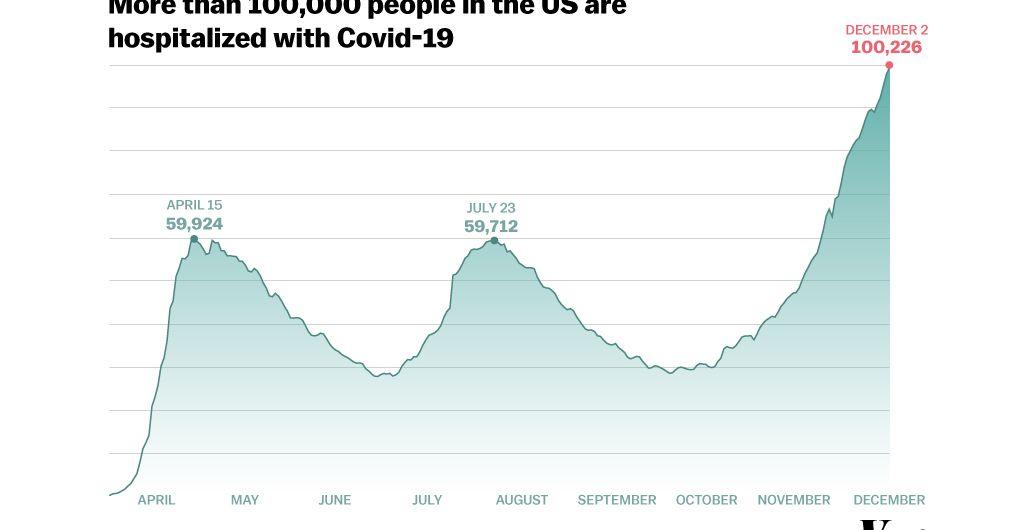 Far more Americans are currently hospitalized with Covid-19 than at any other point in the pandemic, a grim indicator that the third big wave of cases in the US is the worst wave to date by a lot.

On December 2, 100,226 people across the United States were in the hospital after testing positive for the novel coronavirus, according to data reported by the Covid Tracking Project. That’s significantly higher than the last two peaks recorded on April 15 and July 23, when the New York City and the Southeast and Southwest, respectively, were epicenters of the US outbreak. (As the Covid Tracking Project notes, the national and state hospital data have been erratic and incomplete, and reported totals may continue to shift.)

What’s clear from the data is that Covid-19 migrated across the country to new regions this fall. In the spring, hospitalizations were overwhelmingly concentrated in the Northeast. In the summer, more than half of hospitalized Covid-19 patients were in the South and West: states like Arizona, California, Florida, Georgia, and Texas.

Now, every state is battling an active outbreak, and many of them are severe. “There’s so many places, with so many people, that the numbers are just drastically higher,” said Daniel McQuillen, an assistant professor of medicine at Tufts and a senior physician in the division of infectious diseases at Beth Israel Lahey Health, at a November Infectious Diseases Society of America briefing.

“There are no more hot spots,” said Murtaza Akhter, an emergency medicine physician with Valleywise Health Medical Center in Phoenix, Arizona. “Everywhere is a hot spot.”

As of December 3, California had the highest number of hospitalizations of any state (9,702), and Texas was in second place with 9,151 people in the hospital; Midwestern states like Michigan, Illinois, and Ohio have also seen record spikes in cases in recent weeks and now have more than 4,000 people hospitalized each.

“The hospitalization number is the best indicator of where we are,” Eric Topol, a professor of molecular medicine and director of the Scripps Research Translational Institute, told Vox this summer. That’s because it’s a better measurement of the severity of the pandemic than Covid-19 testing, which only finds a fraction of cases and includes more mild cases. “We’re going to go to new heights in the pandemic that we haven’t seen before. Not that what we saw before wasn’t horrifying enough.”

Some states like Utah and North Dakota have lower total hospitalizations but also fewer hospitals and hospital beds — and they’re now reaching a woeful tipping point of hospitals stretched to maximum capacity.

“Here in Salt Lake City, we provide a lot of [specialized infectious disease and ICU care] to people in four states as far away as Montana, Arizona, and Wyoming … and our hospitals and caregivers are extraordinarily stressed,” Andrew Pavia, the chief of pediatric infectious diseases at the University of Utah School of Medicine, said at the IDSA briefing. “Our ICUs are full, but that includes overflow ICUs that have been purpose-built, taking advantage of the time we’ve had to plan.”

This was, unfortunately, to be expected (although it wasn’t inevitable). As the weather has turned cooler and states failed to fully control their outbreaks, transmission picked up when people moved indoors. Nearly all the states currently experiencing an increase in new cases and hospitalizations also did not experience major outbreaks in the spring or summer, so residents were less fearful and took less action to prevent the spread of the virus.

“There was a political climate where there’s distrust of government and reluctance to take harsh measures” in places like Utah, Pavia said. “Many of these states did not have mask mandates until very recently, and some don’t even have them today and have very limited restrictions on mass gatherings.”

Deaths have nearly hit a new record high as well, reaching 2,733 on December 2, reversing a steady decline that had begun in early May after the first wave and in August after the second wave.

Cumulatively, 13.9 million Americans have tested positive for Covid-19 since the pandemic began, and more than 267,000 of them have died. With hospitalizations surging and several states reporting thousands of new cases a day, CDC Director Robert Redfield said Wednesday Americans are in for “the most difficult in the public health history of this nation.”

The new hospitalizations, and the untenable pressure they’re putting on the health care system, are also a reminder of how critical it is for states to implement and enforce measures like mandatory face masks, restrictions on bars and restaurants, and for the federal government to fix testing and contact tracing problems. “It should be an all-points bulletin to really bear down on this, because otherwise there’s no limit on where this might go,” said Topol.

The good news is that infectious disease experts think many hospitals are better prepared to handle surges in Covid-19 patients than they were in the spring. For the most part, they have the equipment they need and they know how to deploy it. They also have more standardized protocol for treating the sickest patients.

Yet hospitals in hot spots across the country are maxing out their staff, equipment, and beds, with doctors and nurses warning that the worst-case scenario of hospital resources being overwhelmed have already arrived as their states have failed to get control of the coronavirus.

“The surge of Covid-19 patients takes away from our ability to care for the sick patients that are already in Arkansas,” said a nurse at a major health system in Little Rock, who asked to go unnamed fearing retaliation from her employer. “We have so many nurses quarantined that we’re not able to staff our oncology unit appropriately, and our patients are being negatively affected. Covid-19 is right now overburdening our health care system in Arkansas.”

“ICU beds don’t take care of people — you need staff,” Pavia said. “And one of the things that many of the Western states have in common is a relative shortage of the people we need to take care of very sick people during a pandemic like this: ICU doctors, probably most importantly ICU nurses, and infectious disease physicians, respiratory therapists. These folks have been working flat out for eight or nine months, and three months into the surge, they’re exhausted, they’re stressed.”

Staffing is a universal problem in hot spots. Gov. Gary Herbert of Utah said the state will have to bring in out-of-state nurses to help with the surge, and officials and health care providers in South Dakota, Tennessee, Arizona, and Wisconsin are requesting them too

In Texas, officials are setting up medical tents in El Paso and Lubbock in response to the rapid rise in hospitalized Covid-19 patients and a dwindling number of hospital beds. “El Paso, Texas, is almost completely out of ICU beds; Lubbock, the same thing,” said McQuillen.

“We are the 11th-largest city in the state of Texas and we have two field hospitals on their way to town,” Jarrett Atkinson, Lubbock’s city manager, told KCBD in November. “I can absolutely assure you that never in my career did I think we would be deploying field hospitals to Lubbock, Texas.”

According to McQuillen, both El Paso and Lubbock have been “much less stringent with their populations [mandating] simple things like wearing masks, and socially distancing.” He compared that to Massachusetts and other Northeast states where he says strict measures during the spring surge made a big difference in reversing the steep climb in cases and hospitalizations. Yet too many states ignored that critical lesson, and now are paying the price.

While daily Covid-19 hospitalizations are surging, another key metric, daily deaths, reached 2,733 on December 2, the highest it has been since April during the first surge, according to the Covid Tracking Project. It’s an ominous sign that deaths will reach horrifying new levels in the coming weeks and months, given that cases and hospitalizations are now at new highs.

It’s possible, experts say, that fewer people who are hospitalized will end up dying in this winter stage of the pandemic as compared to the spring. As Vox’s Julia Belluz reported, there have been significant improvements in mortality in the US and Europe in the past several months, as doctors’ understanding of Covid-19 and how to treat it has improved:

Now, there’s strong evidence that common steroids like dexamethasone can reduce the risk of mortality in severely sick inpatients. Putting patients to rest on their stomachs instead of their backs (a practice known as proning) also seems to help.

Though there’s still a lot of progress to be made, the treatment approach has become more standardized over time, said Jen Manne-Goehler, an infectious disease doctor at Brigham and Women’s and Massachusetts General hospitals. When she started treating Covid-19 patients in the spring, it felt like practice was changing every few days. Now it’s more streamlined — and that’s undoubtedly helping with survival, too.

That said, if hospitals in the hard-hit states run out of beds and staff to treat the incoming flow of patients, more people who could have been saved may die. When ICU staff were stretched in the spring, “ICU patients just didn’t get the same attention,” intensive care doctor Lakshman Swamy, who works with the Cambridge Health Alliance, told Belluz.

Murtaza Akhter, the Arizona doctor, worries that his emergency room will be completely overwhelmed around Christmas, about one month after Thanksgiving, when many people are expected to have been infected after ignoring or the public health guidance to avoid family gatherings. He says he’s most worried about the “borderline patients who may otherwise have been admitted to the ER — they may now be more likely to go home because there are no hospital beds. And of those people, a very distinct fraction will have a worse outcome.”

This is one big reason why overtaxed hospitals will lead to more deaths. “This Covid-19 surge really has a huge downstream effect everywhere, not just on Covid patients but everybody else because it’s not like car accidents magically stopped or heart attacks stopped, they’re still there. The ones who do come in and get discharged, more often than many get worse outcomes.”

Will Carnival, Royal Caribbean Or Norwegian Stock Grow The Most By...

Column: You thought McConnell was tough as majority leader? Wait until you see him as minority leader