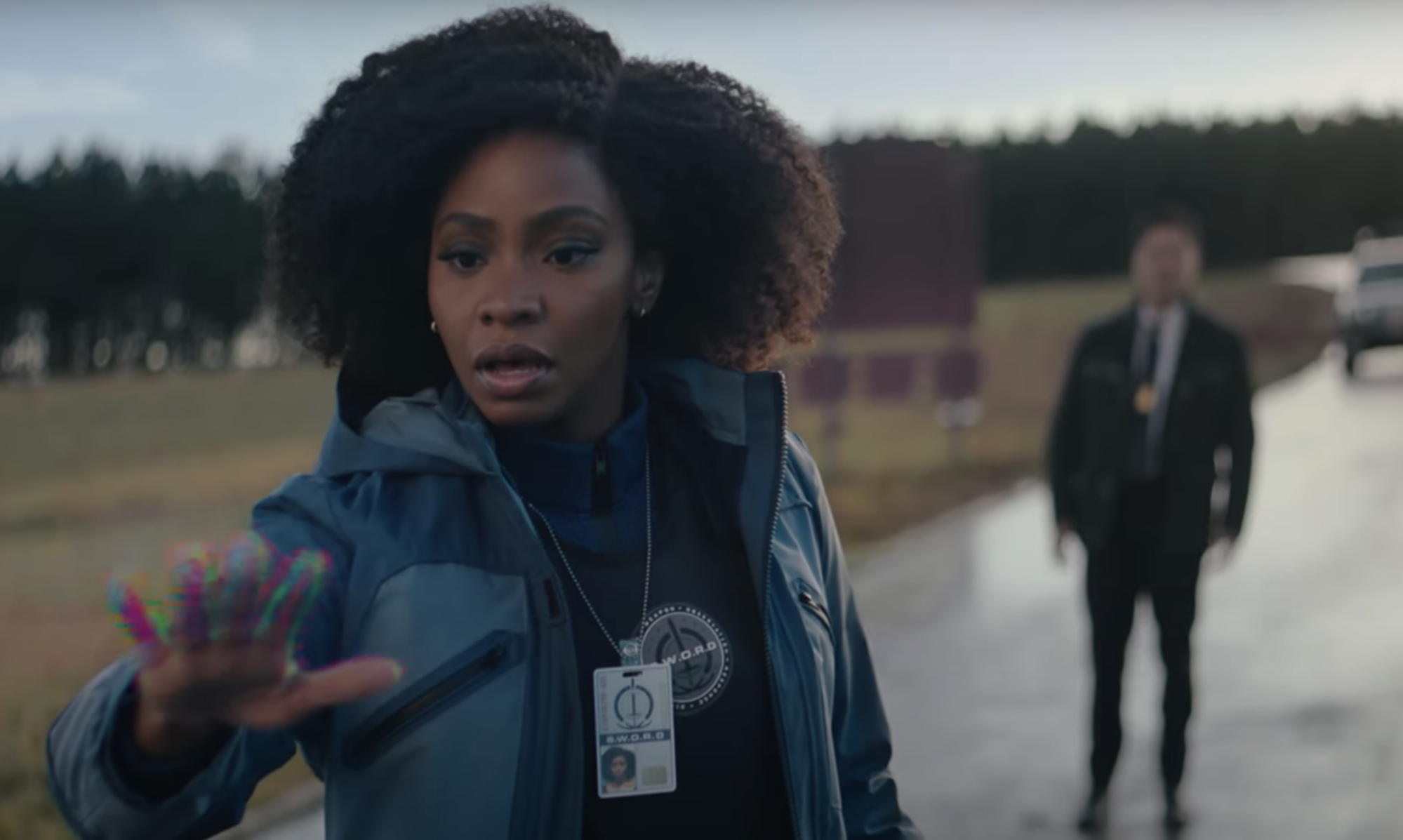 Warning: This post contains spoilers for the fourth episode of WandaVision.

As a wise man once said, welcome to the real world. The fourth episode of WandaVision rewinds the timeline to the start of Marvel Studios’s first Disney+ series. But this isn’t your average repeat: instead of playing back Wanda and Vision’s sitcom adventures, “We Interrupt This Program” takes place almost entirely outside the sitcom bubble of Westview in the actual Westview, a one-horse burg in the middle of New Jersey. That’s where the combined forces of S.W.O.R.D. and the FBI watch Wanda’s TV-inspired hallucination play out, and we see the big moments from the first three episodes — including that crazy dinner, the creepy beekeeper and the birth of Wanda’s twins — from the perspective of familiar Marvel Cinematic Universe faces: Captain Marvel’s Monica Rambeau (Teyonah Parris), Ant-Man’s Jimmy Woo (Randall Park) and Thor’s Darcy Lewis (Kat Dennings).

With this shift in perspective also comes fresh details about Monica, who was previously just a supporting players in Wanda’s drama. The episode opens with the revelation that she was among the millions of MCU citizens blipped out of existence for five years following Thanos’s Infinity War finger snap. Along with Peter Parker and half of Midtown High, Monica re-materializes thanks to Tony Stark’s sacrifice, only to discover that her beloved mother, Maria — best friend of Carol Danvers and founder of S.W.O.R.D. — died two year into her five-year absence. The creepy Endgame callback gave Twitter all the feels.

The blip scene in ep 4 of WandaVision…. y’all I would like for each episode to be 3 hours long

#WandaVision spoilers for episode 4
.
.
.
.
I’m so happy we’re getting to see more of the aftermath of the Blip. The opening to this episode…!!

Telling that the first thing the doctor asked Monica was “Where did you go”. That was us all in 2018 going ARE THEY IN THE SOUL STONE

After returning to our reality, Monica wastes little time returning to work at S.W.O.R.D. HQ, where she’s acquired the nickname “Photon” — the same name of her super-powered comic book counterpart. But it’s not the same place she remembers, starting with the new guy in charge: Tyler Hayward, played by Josh Stamberg. With the Blip opening up a vacuum in leadership, he’s stepped in to fill the void, and seems more than a little embarrassed about the promotion.

But some viewers seem a sinister edge to his aw-shucks persona: one theory making its way through fandom is that Tyler Hayward is related to Brian Hayward — an evil super-soldier who tangled with the Agents of S.H.I.E.L.D. during its seven-season run. Although that show’s relationship to MCU canon has always been tenuous, this could be a way to finally allow Melinda May to join the Avengers where she belongs. Then again, maybe he’s just another deep-cover Skrull operative or a red-horned demon.

I looked into Tyler Hayward because I don’t trust him and I found Brian Hayward, he was a member of the centipede project, which is Hydras supersoldiers. They used the supersoldier serum, gamma radiation and Extremis to make it. These soldiers can be

The final moments of the episode showed more of the confrontation between Wanda and Monica that resulted in her forceful expulsion from the sitcom Westview. After daring to utter the name “Ultron” in the Scarlet Witch’s presence, Monica realizes just how far Wanda has traveled from reality. “You’re not my neighbor, and you’re definitely not my friend,” she says, with quiet menace. “You are a stranger and an outsider, and right now you are trespassing here. I want you to leave.” At that point, Wanda’s hands glow scarlet and she blasts Monica straight out of town — an ejection that purposefully echoes a classic Twilight Zone episode that co-starred the dearly departed Cloris Leachman.

WANDAVISION SPOILERS‼️
–
–
–
–
–
–
–
–
“you are trespassing here, and i would like you to leave”
mhm miss olsen coming for that emmy

Now that the two Westview timelines are in sync — and Monica realizes the true force they’re up against — don’t even think about changing that dial: a reckoning is coming for Wanda, and her grief-fueled rage might explode in a way that makes Thanos’s Blip look like… well, a blip.

WandaVision is currently streaming on Disney+

RELATED:  'Saved by the Bell' star Dustin Diamond reveals he has cancer