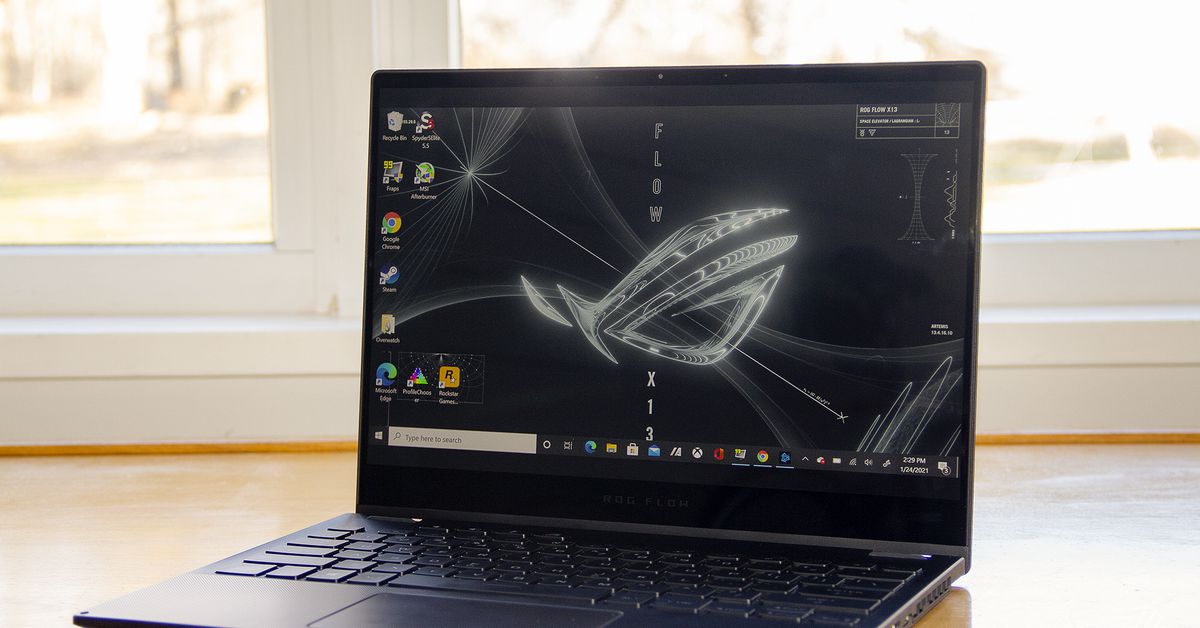 The Asus ROG Flow X13 was one of the most-hyped announcements of CES 2021, with good reason — how often do you see a 13-inch convertible gaming laptop, especially one that looks so cool? — but there was a catch. On Asus’ store, the ROG Flow X13 was only listed in a $3,000 bundle with an XG Mobile eGPU. (This was also the only preorder link given to media at the time of the Flow X13’s announcement.) That’s a chunk of change, and it led most Flow X13 reviewers (myself included) to express reservations about the steep price.

But a new clarification from Asus may change the game. On the latest episode of the ROG Pulse Podcast, Asus marketing manager Sascha Krohn indicated that the company does, in the future, plan to sell the ROG Flow X13 by itself.

“There was some misunderstanding about us only selling it as a bundle, so the XG Mobile together with the X13,” Krohn said. “So we do sell it as a bundle, but we also sell it separately, and that’s important.”

Asus marketing specialist Ryan Nesbit gave a rough starting price of “$1,200-ish.” Nesbit and Krohn did not reveal a timeline or release date for this X13 configuration. We’ve asked Asus about this and will update this article if we hear back.

That $1,200 price point, if Asus follows through on it, would be a game-changer for the ROG Flow X13. Many reviews pointed out that the X13’s value proposition as a $3,000 gaming laptop is iffy outside of a fairly niche audience. Its internal GPU is entry-level compared to the chips you’ll find in other gaming ultraportables, and external GPUs tend to incur a performance penalty. (After all, they’re outside the laptop.)

But as a $1,200 general-purpose laptop, I’d be comfortable calling the Flow X13 an absolute steal. Not only is it great in almost every way — there’s a unique and sturdy design, a great keyboard, and an excellent 16:10 touchscreen with stylus support — but it includes an eight-core processor (starting with AMD’s Ryzen 5900HS). That’s undoubtedly the most powerful chip you can currently find in a 13-inch chassis. At $1,200, this laptop would be a no-brainer for anyone who needs a 13.4-inch laptop for CPU-intensive work.

The flipside of this: it means the GeForce RTX 3080 XG Mobile (in the bundle that’s listed on Asus’ site and also the one that was sent to reviewers) is pretty expensive. Krohn and Nesbit also indicated that an RTX 3070 edition of the XG Mobile will be available in the future, with an estimated price of “around eight to nine hundredish.” Basic math suggests this would make the RTX 3070 XG Mobile as much as $1,000 cheaper than the RTX 3080 configuration in the bundle that’s currently listed. That’s quite a large delta, but I guess we’ll see.

It’s not clear from the podcast whether Asus plans to sell the XG Mobile on its own or whether this eGPU will be sold in a cheaper Flow X13 bundle. We’ve asked Asus for clarification here, too.

You can view the full episode below. The pricing discussion begins just over 15 minutes in.

Photography by Monica Chin / The Verge