The 458-km-long Narmada canal snakes its way through south and central Gujarat like a green highway. Not far from Gandhinagar, the state capital, a branch of the canal takes water to Dhanki, a massive pumping station, located in the dusty plains of the region. From there, the first of an incredible series of water-lifting operations takes place to ensure that the canal waters reach the drought-prone Saurashtra region which earlier got only 17 per cent of the total water in the state. That was because, as state principal secretary (water) Dhananjay Dwivedi explains, “Saurashtra is shaped like an inverted saucer and the canal water has to be pumped up a steep gradient of 69 metres or the height of a 23-storey building so that it reaches every part of the region.” Similarly, branch canals take water to the deserts of Kutch and the dry lands of north Gujarat. In just two decades, the Narmada canal waters have transformed the entire landscape and the lives of the people of the state.

Before work began on the canal, Gujarat, located in a drought-prone zone of the country, was perennially short of water, both for drinking and irrigation. Dwivedi recalls that as deputy commissioner for various districts, one of his main tasks was to organise water tankers and even water trains to meet drinking water needs. When INDIA TODAY did a major story titled ‘Thirsty India’ in 2003, the cover visual showed hundreds of villagers crowding around a large well to get a bucket of water in a village in Gujarat’s Limbdi taluka. Sona Waghela, a housewife, recalls how she used to spend four hours daily filling drinking water from drying wells. “There were quarrels and occasional fights to get the maximum water,” recalls Waghela. “The entire family used to throng the well as one member couldn’t carry more than two vessels.” In 2021, Limbdi presents a vastly different sight. It is awash with water with the dried-up lake full to the brim and houses, including Waghela’s, having water on tap. All this because a branch of the Narmada canal started supplying water to the area around 2008.

Yet, it was not an easy transformation. If it succeeded it was because of the far-reaching vision of Narendra Modi who took over as chief minister of the state for the first time in 2001 when the Narmada canal was being constructed. Modi told his officials to not just rely on the Narmada water but strengthen the existing canal systems, and insisted that the management of drinking water and irrigation should be participatory. That meant breaking the bureaucratic stranglehold over projects and involving both NGOs and the water beneficiaries from the beginning itself. Most importantly, Modi, as chief minister, set aside funds to build the infrastructure needed to supply water because he saw it as central to the socioeconomic transformation that he wanted to bring about. In all, the state has invested over Rs 1 lakh crore in water resources in the past two decades.

Apoorva Ajay Oza, vice-president, water, irrigation and power programmes, Agha Khan Rural Support Programme, who worked closely with the Gujarat government on the mission, says the reason for the success was three-fold. He says, “First, Narendra Modi was quick to realise the value of strengthening existing water sources even as the Narmada canal brought relief. Second, he pushed for conservation of water, particularly promoting drip irrigation. Third, instead of relying on engineers to perform management tasks, he encouraged NGOs to get involved to educate the people and got the operations parts to be managed either by pani samitis for drinking water or water users’ associations for distributing irrigation water.”

SMOOTH OPERATION, A.K. Bariah, 57, opens the valve to let water from a Narmada sub canal flow into his fields and that of 600 other farmers. He is secretary of the water users’ association that maintains the supply of water for irrigation. The association collects a fee from its members and this is used for the upkeep ofthe canal system.

Modi then modified the bureaucratic organisation to manage water resources by breaking it down into functional departments rather than an umbrella organisation. The Gujarat Water Supply and Sewerage Board continued to be in charge of developing and regulating water supply and sewerage. The Water and Sanitation Management Organisation (WASMO) was created to empower village-level institutions to operate and manage their own water supply facilities. The Sardar Sarovar Nigam Limited was made an autonomous body responsible for the implementation of the Sardar Sarovar project. The Gujarat Water Infrastructure Limited was made responsible for building the bulk-water pipe grids to transport the Narmada waters. 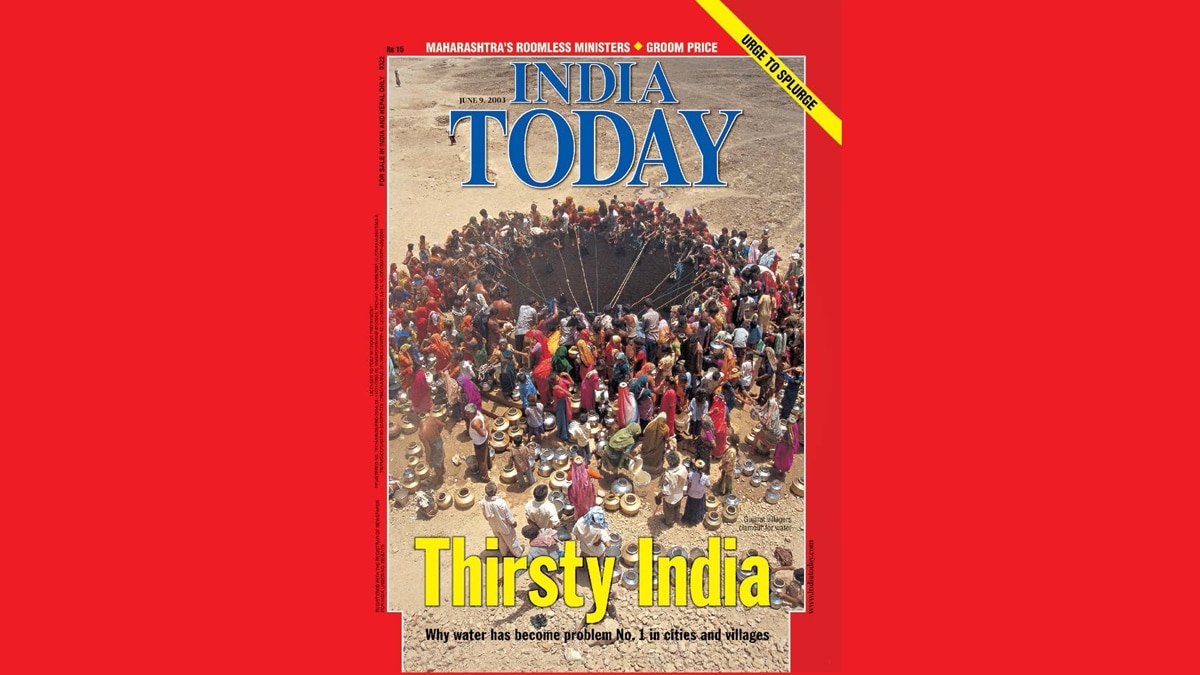 The Gujarat Water Resources Development Corporation (GWRDC) became an autonomous organisation responsible for the survey, monitoring and development of groundwater. Having streamlined the bureaucratic set-up, Modi then laid down five major focus areas for the organisations involved with water and sanitation. These included water conservation, inter-basin water transfer and linking, strengthening of the existing canal system, participatory water and irrigation management and micro-irrigation. The concentrated focus has provided major results, irrigable area is up 77 per cent in the state; ground water recharge has gone up by 55 per cent compared to 2002; and now 20 per cent of the net sown area is covered under micro-irrigation. More than 184,000 check dams have been built and 327,000 farm ponds. Another 31,500 ponds have been deepened to enhance capacity and about 1,000 abandoned stepwells have been revived, cleaned and put to use. 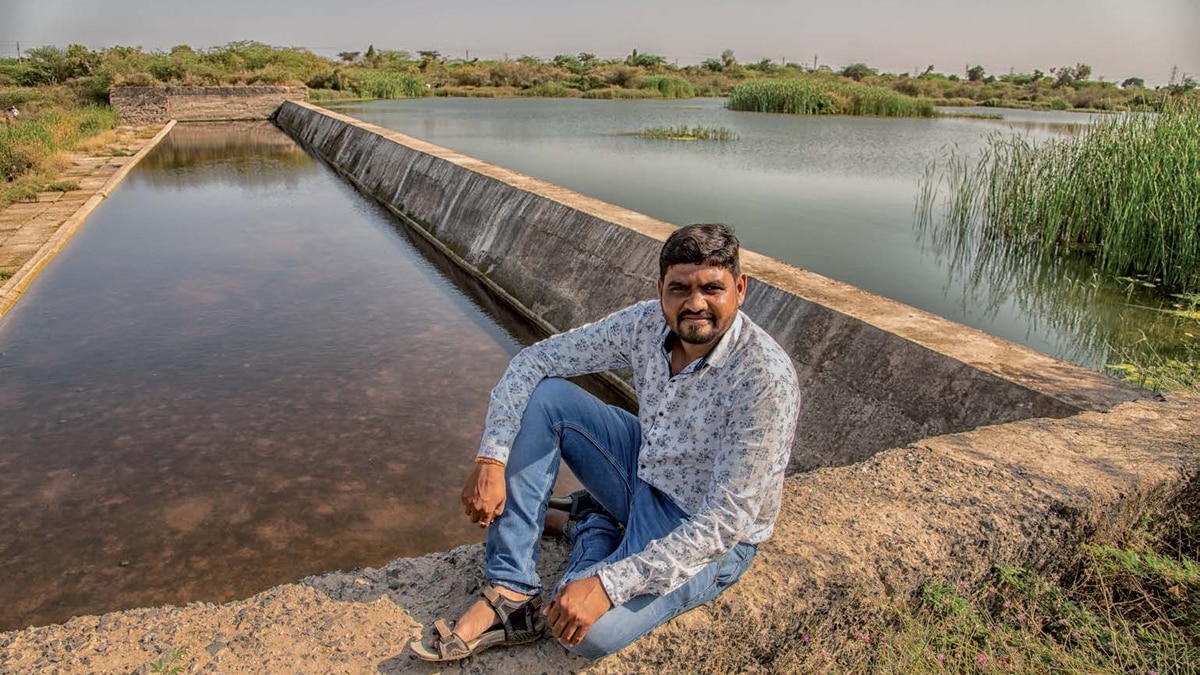 BOUNTIFUL: The check dam in Rajsitapur in Surendranagar district, built on a PPP basis, has helped farmers like Mahesh Patel, 38, grow three crops instead of one raising his annual income considerably.

What is more, now close to 18,200 villages (around 95 per cent) have pani samitis that manage their water supply, showing that participatory management has taken firm root. Dwivedi says that two decades ago, his job as water resources secretary would have been a constant battle to supply water by any means. Now there are very few days in a year that he is troubled with questions of shortage of supply. He utilises the time strengthening the infrastructure and improving supply and distribution. As Dwivedi puts it, “A state that faced perennial water scarcity has in just two decades been transformed into one that has adequate water for drinking, agriculture, animal husbandry, industry and there is the economic growth it ushered in.” Where water resources are concerned, Modi can certainly stake claim to developing a successful model for water management as chief minister. Now, as prime minister, he is implanting some of the big lessons he learnt in his long stint in Gujarat.