Home General The head of Operation Warp Speed apologizes for shortfalls in vaccine deliveries to at least 14 states.

The head of Operation Warp Speed apologizes for shortfalls in vaccine deliveries to at least 14 states. 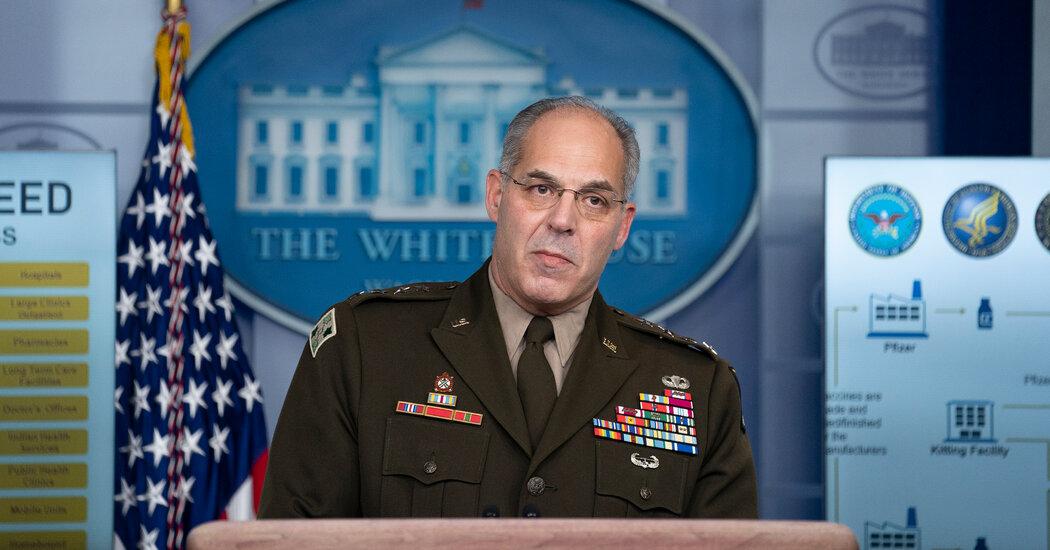 Gen. Gustave F. Perna, who heads Operation Warp Speed, the Trump administration’s multiagency effort to get coronavirus vaccines out to Americans, apologized repeatedly on Saturday morning for confusion over vaccine deliveries to states.

He attributed some of the problems to the federal government’s miscalculation of how many doses of Pfizer-BioNTech’s vaccine could be shipped. The discrepancies disrupted vaccination plans and stirred consternation in at least 14 states.

General Perna is in charge of the logistics for distributing the coronavirus vaccines to the states, and he took full and sole responsibility for the delays and confusion around the vaccine rollout, and for the discrepancies between the number of doses states were expecting and what they are receiving.

“It was my fault,” he said. “It was a planning error, and I am responsible.”

“I want to take personal responsibility for the miscommunication,” General Perna said at a news conference. He said the number of vaccines available to allocate ended up being lower than initial forecasts.

“I had to lower the allocations to meet the releasable doses that were presented to me,” General Perna said. “So to the governors,” he said, “please accept my personal apology if this was disruptive in your decision-making.”

He added that he did not understand with “exactness” the requirements for the release of each batch of doses. He referred several times to the Food and Drug Administration’s involvement, but was unclear about how that would have delayed shipments.

The F.D.A. merely requires a certificate that includes the results of quality control tests for each lot of vaccine at least 48 hours before distribution and does not require the certificates be reviewed before shipments occur. That enables the F.D.A. to keep track of the batches being shipped. The requirement is included in the emergency authorization paperwork the F.D.A. sent to Pfizer.

Officials in Oregon, Iowa, Washington, Massachusetts, Wisconsin, Vermont, Minnesota, Nevada, Connecticut, California, Michigan, Idaho, Virginia and New Jersey said that they were caught off guard on Wednesday when they learned that next week’s shipment of the vaccine would contain fewer doses than the first week’s.

Governors and state health departments have spoken with alarm this week of how few vaccines they have received compared with what had been promised.

“This is disruptive and frustrating,” Gov. Jay Inslee of Washington wrote on Twitter on Thursday. “We need accurate, predictable numbers to plan and ensure on-the-ground success.”

Dr. Mark Levine, commissioner of the Vermont Department of Health, said in a Friday briefing that “all my colleagues in the region are reporting a 25 to 35 percent decrease in their allocation for next week.”

“As we were walking in, I learned as many as 975 doses out of an expected 5,850 doses would not be coming in when we expected,” he said. “What everyone around the country is upset about, in addition to just the number, is there’s been no communication, so there’s no understanding of what this really means.”

On Saturday, General Perna noted that boxes of the Moderna vaccine, which was approved for emergency use by the Food and Drug Administration on Friday, were being packed and loaded, and that truckloads would begin rolling out on Sunday.

He said that the government remained on track to allocate about 20 million vaccine doses across the country by the end of December, and that the distribution of those doses would be “pushing into the first week of January.”

“It was a planning error, and I am responsible,” he added.

He also expressed confidence that “we will have the agility to correct ourselves and get things right, so that the next time it will go flawlessly.”