Home News The Hindu Explains | What are the implications of U.S. President Joe Biden rejoining the Paris climate agreement?

The Hindu Explains | What are the implications of U.S. President Joe Biden rejoining the Paris climate agreement? 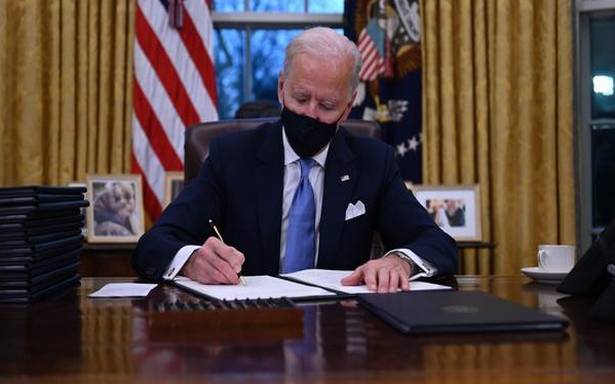 What areas will Mr. Biden focus on to cut emissions? What does his policy mean for other countries?

The story so far: Joe Biden assumed office as President of the United States on January 20, 2021, and among the first orders he signed was one to restore America’s participation in the United Nations Paris Agreement on climate change. His decision on America’s return will take effect on February 19, which would be 107 days after its withdrawal under the Donald Trump administration became formal on November 4, 2020. Under President Barack Obama, the U.S. played an active role in climate negotiations, although the Copenhagen UN Framework Convention on Climate Change (UNFCCC) conference in 2009 failed to produce a consensus, and member-countries only acknowledged the science, without committing themselves to greenhouse gas (GHG) emissions-reduction targets. By 2015, the negotiations progressed with the Obama administration engaging in diplomacy, resulting in the Paris Agreement premised on voluntary targets for national emissions cuts. On the long road to Paris, the U.S., under George W. Bush, had pulled out of the previous pact, the Kyoto Protocol, in 2001.

What changes did the Trump administration make on climate?

The withdrawal from the Paris Agreement meant that the U.S. was no longer bound by its national pledge made under the pact: to achieve an economy-wide reduction of its GHG emissions by 26%-28% below the 2005 level in 2025 and to make best efforts to reduce emissions. America also stopped its contribution to the UN’s Green Climate Fund, to which it had pledged $3 billion, after transferring an estimated $1 billion.

On the contrary, the Trump regime focused on, among other things, relaxing controls on emissions from fossil fuel-based industries, diluting standards on air quality and vehicular emissions, hydrofluorocarbon leaking and venting from air-conditioning systems, loosening the way the government calculated the social cost of carbon, restraining individual States such as California from setting higher standards, revoking protection for natural habitats, including the Arctic sought by the oil and gas industry, and for individual wildlife species. In all, more than 100 environmental rules were tinkered with by the administration, with some rule reversals remaining in process when the presidential election took place, and others taken to court. The ability of the Environmental Protection Agency (EPA) to enforce the law was weakened, and the scientist leading the production of the National Climate Assessment, Michael Kuperberg, was replaced just after it became clear that Mr. Trump was losing the election.

The Clean Power Plan, a major provision from the Obama-era to cut power sector emissions by 32% over 2005 levels by 2030, was initially replaced with the Affordable Clean Energy (ACE) rule, with a reduction effect of only 0.7%, according to an estimate by Harvard Law School. In the final days of the Trump presidency, however, the ACE rule was struck down by a court, giving Mr. Biden the freedom to reformulate a strong rule.

What areas will Mr. Biden focus on to cut emissions?

The U.S. accounts for 15% of global GHG emissions, but it is the biggest legacy contributor of atmosphere-warming gases. Transport (28%) and power (27%) are the two biggest national sectors contributing to GHG emissions, followed by industry (22%) and agriculture (10%), according to data published by the EPA in 2020. Commercial and residential emissions together make up only 13%. Significantly, 10% of U.S. emissions are methane, which has a greater warming effect than CO2, and 81% is carbon dioxide. The rest is made up of nitrous oxide and fluorinated gases.

Mr. Biden, who has formed a high-powered team including special presidential envoy for climate, John Kerry, to lead clean development, has placed climate change front and centre among his priorities. He has promised an “enforcement mechanism to achieve net-zero emissions no later than 2050”, including a target no later than the end of his term in 2025, aided by a planned federal investment that will total $1.7 trillion over ten years, besides private investments.

The plan revolves around 10 million well-paying clean energy jobs with a focus on solar and wind power, close linkages between university research and the private sector modelled on the post-World War II economy, active support for carbon capture, utilisation and storage, and a renaissance in green transport that includes the “second great railroad revolution” in a country that starved the railways to promote cars and road freight.

What does Mr. Biden’s policy mean for other countries?

In his Plan for Climate Change and Environmental Justice released before the election, Mr. Biden says America will strongly support multilateralism again, but also call for accountability from other countries, including the top emitter, China, on GHG emissions. Nations that default could face carbon adjustment fees or quotas. This year’s UN climate conference in Glasgow will see the new administration engaging UNFCCC member-nations to raise global ambition.