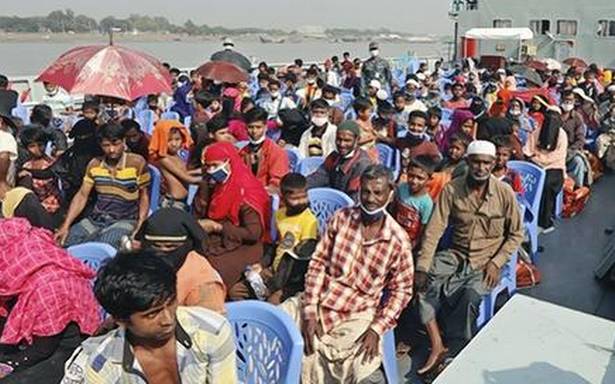 The story so far: On December 10, agencies reported that a United Nations (UN) human rights investigator had requested Bangladesh to allow a safety assessment of the remote islet of Bhashan Char, where the government had shipped 1,600-odd Rohingya refugees. Reuters reported that the UN said it was not involved in the transfer of the refugees there. Thomas Andrews, the UN human rights investigator for Myanmar, told the news agency that the assessment and verification process to ensure that the refugees were not forced to go were in the “best interest of all”. Other human rights agencies have also criticised the move.

Is the islet safe?

Bhashan Char is a char-land of around 13,000 acres, formed by the accumulation of silt where the river Meghna meets the Bay of Bengal carrying rich alluvial deposits. Char-lands are a common feature in Meghna and Padma rivers and literally mean “shifting landmass”. As the name reveals, the char was not part of the permanent land feature of Bangladesh, but appeared recently. Bhashan Char is surrounded by a mangrove forest that has given it geographical stability. Sensing a tourism opportunity, the Bangladesh government had declared Bhashan Char as a protected forest land in 2013. It is a two-and-a-half-hours boat ride away from Cox’s Bazar in Chittagong. The main argument for the char-land being unsafe is that these lands are known to be unstable and flood-prone. The other fear factor includes the tropical cyclones that visit the area every year.

What is the arrangement for the Rohingya?

Over the past few years, Bangladesh has constructed roads and brought modern telecommunication networks to Bhashan Char. The Bangladesh government has earmarked around 1,350 acres for the Rohingya refugees, of which 432 acres is dedicated to their rehabilitation and the rest remains for future projects. The government has constructed a large number of housing units in the section designated for the Rohingya. The country sent 1,642 Rohingya refugees to the islet from their temporary camps in Kutupalong, near Cox’s Bazar, on December 4. They are being housed in red-roofed residential units and most houses are built four feet above the ground to help them withstand unexpected high tidal waves.

Why is Bangladesh moving the refugees?

Rohingya refugees of Kutupalong have been living in a large refugee camp near the forested borders with Myanmar since 2017, when they were forced to traverse the forest and the rivers that constitute the border between Bangladesh and Myanmar’s Rakhine province. Ever since their arrival, the refugees, numbering 1.1 million, have been living in Kutupalong under bamboo and tarpaulin structures. The camp is located on a hillock, which was a sanctuary for elephants and other wild animals. Kutupalong has also been in the news for its rising crime rate. Bangladesh argues that the islet will provide a safer place.

Why are human rights agencies upset?

Amnesty International said Bangladesh must “drop” its plans to shift Rohingya refugees to Bhashan Char as the char-land had not yet been declared safe for habitation by the United Nations.

Omar Waraich of Amnesty International claimed that many Rohingya who were asked to relocate said they were coerced. “Any decisions relating to the relocation of refugees must be transparent and involve the full participation of the Rohingya people. In the meantime, plans for any further relocation must be abandoned,” Mr. Waraich said.

Diplomatic sources have confirmed that Dhaka does not plan to relocate the entire refugee settlement and only aims at reducing the congestion in Kutupalong. The country’s long-term plan for Rohingya refugees is to seek their repatriation to the Rakhine province of Myanmar.