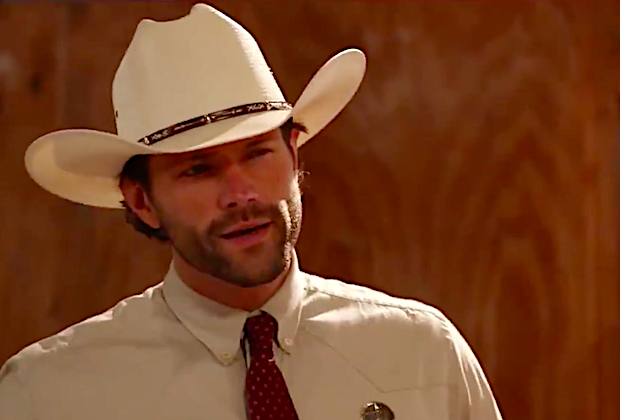 The It List is Yahoo’s weekly look at the best in pop culture, including movies, music, TV, streaming, games, books, podcasts and more. During the coronavirus pandemic, when most of us are staying at home, we’re going to spotlight things you can enjoy from your couch, whether solo or in small groups, and leave out the rest. With that in mind, here are our picks for Jan. 18-24, including the best deals we could find for each.(Yahoo Entertainment may receive a share from purchases made via links on this page.)

Jared Padalecki may have retired from demon-fighting, but he’s found a new way to protect and serve the TV public. The Supernatural star joins the Texas Rangers in Walker, The CW’s reboot of Chuck Norris’s long-running CBS series. While he may share the same name as Norris’s alter ego, Padalecki’s Cordell Walker arrives onscreen with fresh baggage: After his beloved wife (played by the actor’s real-life spouse, Genevieve) is murdered, he has to balance his duties as a Ranger and single father to their two teenage children with a personal promise to track down her killers. This Walker still packs a powerful punch, though. “I grew up watching the original show,” Padalecki remarked in a recent CW press day, adding that he was inspired to revive the series based on the immigration debate that reignited under President Trump. “I read a story about a law enforcement agent who couldn’t bring themselves to put a three-year-old in a cage, and that empathy and emotion struck me. So we started talking about how interesting it would be to see that story told, where somebody is a proud government worker for law enforcement who still thinks to themselves, ‘There might be a better way.’” — Ethan Alter

STREAM IT: Jurassic World animated series is back in a flash

Just the existence of Jurassic World: Camp Cretaceous feels like a throwback. Remember back in the ‘80s when it seemed like every popular movie series got an animated spinoff? OK, the core audience for Netflix and DreamWorks’ dino-filled adventure probably does not. The series, which follows six teenage campers escaping prehistoric predators, was clearly a hit for Netflix; after premiering Season 1 in September, they’re already back with a second string of episodes. That should also help placate Jurassic Park completists chomping at the bit for the year-delayed Jurassic World: Dominion. Watch an exclusive clip from Season 2 above. — Kevin Polowy

Harvard professor Henry Louis Gates Jr.’s genealogy series returns for a seventh season with a moving episode on seven-time Oscar nominee Glenn Close and cult favorite director John Waters. Both are horrified to discover that some of their ancestors were slave owners, with Close’s forefather having participated in a precursor to the Ku Klux Klan. “What’s it like to know your family is documented on all these different lines?” Gates asks her at one point. Getting teary, she answers, “You know what first comes to my mind? That the people who my ancestors owned didn’t have that luxury of knowing their lineage.” Gates confirms, “That’s right. We can’t do this for any Black person whose white ancestor we haven’t identified.” In a lighter moment, the Fatal Attraction star finds out that the late Princess Diana is an eighth cousin on her maternal side. Turns out that the women met in 1989, and the royal was “lovely” to her distant relative. — Raechal Shewfelt

The new season of Finding Your Roots premieres Tuesday, Jan. 19 at 8 p.m. on PBS.

STREAM IT: The White Tiger is India’s latest gift to international audiences

While cinematically India is still best known for its robust Bollywood film market, there continues to be a string of internationally acclaimed dramas born from the beautiful South Asian nation. The latest crossover is The White Tiger, Ramin Bahrani’s gripping adaptation of Aravind Adiga’s bestselling novel about a poor villager (Adarsh Gourav) who lands his dream job as the driver for an upper-class scion (Rajkummar Rao) and his wife (Priyanka Chopra-Jonas, drawing some of her best reviews yet), only to be betrayed by the family when he’s forced to take responsibility for a car crash he had no role in. It may not ultimately have the Oscar heft of other recent imports like Slumdog Millionaire or Lion, but The White Tiger is still well worth tracking. — K.P.

Launched in 2000, the popular Hitman franchise is enters its second decade — and makes its PS5 debut — with Hitman 3, the third entry in the globetrotting “World of Assassination” trilogy. The new game once again lets players control ace assassin Agent 47, whose current roster of assignments takes him from Dubai to Mendoza and beyond. In addition to both existing PlayStation consoles, Hitman 3 is also available on Xbox One, Xbox Series and Nintendo Switch. — E.A.

WATCH IT: Let’s talk about Salt-N-Pepa

They were the first female rap group to win a Grammy, and the first female hip-hop act to land a platinum album, among their many, many accomplishments. Now, Cheryl “Salt” James and Sandra “Pepa” Denton are telling their story, as executive producers of this Lifetime movie. The audience sees the two students at New York’s Queensborough Community College team up in the ‘80s and, within a decade, reach the highest echelons of the industry. Like any good biopic, though, especially ones on Lifetime, there’s a focus on more than just their professional lives. The trailer shows the women being reminded that they’re role models, as if they could ever forget, and contemplating their identities outside of the group. Their hits, such as “Let’s Talk About Sex,” “Shoop” and “Push It,” make a fun soundtrack for all the drama. Zoey 101 alum G.G. Townson plays James, while Laila Odom, from The Bobby DeBarge Story, portrays Denton. Newcomer Monique Jasmine Paul takes on the role of Deidra “Dee Dee” Roper (aka “DJ Spinderella”). Both Denton and James will stick around after the film for an interview. — R.S.

Salt-N-Pepa premieres Saturday, Jan. 23 at 8 p.m. followed by an interview with the subjects at 11 p.m. on Lifetime.

STREAM IT: Get hooked on the new Israeli psychological thriller Losing Alice

Israeli filmmaker Sigal Avin wrote and directed all eight episodes of this Hebrew-language limited series, which feels like a descendent of movies like Robert Altman’s The Player and David Lynch’s Mulholland Dr. Ayelet Zurer plays the title character, a director stuck in a prolonged creative funk, exacerbated by the fact that her husband’s acting career has been taking off as he enters middle age. Enter the show’s version of a femme fatale, Sophie (Lihi Kornowski) — a young filmmaker whose preternatural talent both excites and unnerves Alice. As crafted by Avin, Losing Alice subtly moves between Alice’s lived reality and her overactive imagination, while also wrestling with the all-too-real concerns confronted by women in the film industry, from a lack of opportunity to the fear of being pushed aside in favor of the next big thing. The first three episodes premiere on Apple TV+ on Jan. 22, and new installments follow every Friday. — E.A.

WATCH IT: Sophia Loren’s life and legacy is celebrated in the new Netflix documentary short What Would Sophia Loren Do?

Italian screen legend Sophia Loren made her streaming debut last November in the Netflix drama The Life Ahead, directed by her son, Edorardo Ponti. The new documentary short What Would Sophia Loren Do? offers a quick refresher on her storied career, through the eyes of one of her biggest fans. Growing up in New Jersey, Nancy Kulik — the daughter of Italian immigrants — kept in touch with her heritage via Loren’s movies, and used her as inspiration for raising her own kids. (Kulik’s daughter, Regina K. Scully, executive produced the short film.) Kulik’s memories are intertwined with Loren’s own life story, building to a climax where the two of them meet face-to-face. It’s a touching reminder of the way movies and movie stars can sometimes step off the screen and into our own lives. — E.A.

What Would Sophia Loren Do? and The Life Ahead are currently streaming on Netflix.

Back in the 1990s, directors like Allison Anders, Kevin Smith and Quentin Tarantino successfully burst out of the indie filmmaking world and into the mainstream. Twenty years later, those career leaps are much harder to replicate. Just ask Justin McConnell, a struggling writer/director who chronicles his experiences in the contemporary indie scene in the eye-opening documentary, Clapboard Jungle. When he’s not chasing after funding and distribution for his dream projects — an increasingly difficult challenge in an oversaturated marketplace where the metrics of success are rapidly changing — McConnell seeks advice from creative types like Guillermo Del Toro and Tom Savini, who also got their start in the low-budget world. Clapboard Jungle offers an in-the-trenches look at the business side of show business, and reminds aspiring filmmakers that making a career is even harder than making a movie. — E.A.

Clapboard Jungle premieres Tuesday, Jan. 19 on VOD and Blu-ray and DVD on Amazon.

— Video produced by Jon San and edited by John Santo