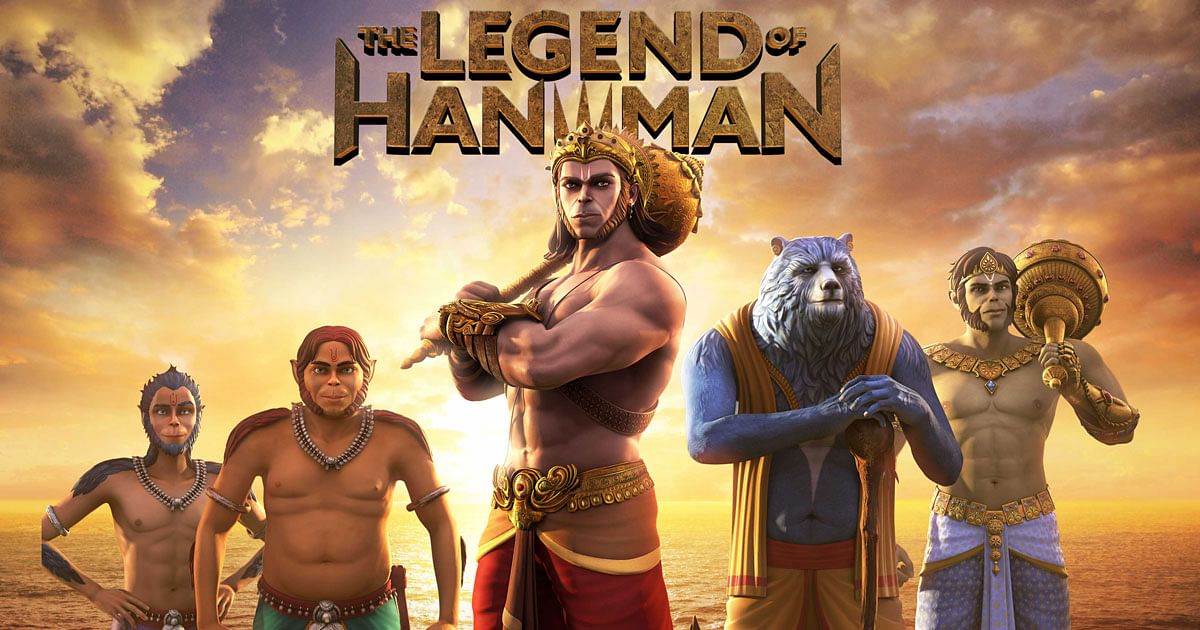 As a child too obsessed with mythology and history, Japanese filmmaker Yugo Sako’s animated rendition of Ramayana was the biggest treat then. With technology and filmmaking both advancing hand in hand, the retelling of the same tale is bound to be more attractive and visually rich. But is it a wise decision to tell the same story with not much difference multiple times? Let’s find out. Also, Hotstar‘s Legend Of Hanuman begins with a disclaimer that creative liberties are taken, more on that below!

The Legend Of Hanuman Review: What Is It About:

I can see you royally skipping this part, but I can’t. Legend Of Hanuman that hits Hotstar today is the retelling of the story of the Mighty God that has our frenzy since childhood. The epitome of power, honesty and strength. But it takes a step ahead and touches some parts of the story that didn’t make it to the visual retellings until now.

The Legend Of Hanuman Review: What Works

As said, the retelling of myths any day is fodder to our nostalgia, and for us Indians who have grown up on these stories, it means a better part of our beings. I was sceptical before getting into Legend Of Hanuman, as this wasn’t the first time someone was narrating me this story, and it isn’t that I don’t know it, or at least most of it.

But I am happy to report; I enjoyed Legend Of Hanuman 60 per cent. Will explain the ratio too. Considering the thought trail the adult me follows, I would not like to get into the authenticity of the tale, because the ‘offence’ meter is broken, and there is no limit to it now. What I want to talk about is the animation part of it. Sharad Devarajan, who has been in the comics business for years now, puts all his knowledge with his able colleagues Charuvi Agrawal, Jeevan J Kang in creating this universe.

Yes, these are the same characters that we have heard of. Everyone from Ram to Laxman to Jatayu or even Nal-Neel. But the creators in Legend Of Hanuman give them the humanness that we have missed associating them with so long. The prime key in this Hotstar special is humanising the Gods and explaining their uniqueness amid the normal. There is also a refreshing twist in their looks here. The animation tries to touch the real world as much as it can when it comes to creating the bodies of the character.

The surroundings is altogether a different ball game here. Unlike all other renditions where the demons were designed to look scary and as evil as possible, here they are funny to the extent of being cartoons of sorts. I understand it is to catch the imagination of children watching the show. Two of my favourite is the Evil Hanuman (you will see in the show) and Surpanakha in an avatar never seen before.

The Legend Of Hanuman did narrate some aspects of the mythological tale that I wasn’t aware of. If they are true or not, is debatable (will tell you why).

The Legend Of Hanuman Review: What Doesn’t Work

The show begins with a disclaimer that creative liberties are taken, I don’t know of what level. But if that is how I enter a show that has characters whose existence is the biggest topic of debate, I for one will choose to watch it as fiction. And for a fictional tale, I cannot think that the newly introduced plot twists really happened.

The dialogues. In the effort to humanise the world, The dialogue writers add too much of modern flavour, which ends up breaking the connect.

It is beautiful, vibrant and attention-grabbing. Watch Legend Of Hanuman with the realisation that it is made for entertainment purpose only. It is for children and the child-adult in you, let’s watch it with that mindset.

Back to Top
Close Add post
X
Rege-jean Page And Phoebe Dynevor Very Close, The Actress Confides On The Smell Of Her Co-star ̵…HollywoodPhoebe Dynevor opened up about the smell of Rege-Jean Page, her co-star in The Bridgertons Chronicle, and it’s pretty funny.A few days ago, Phoebe Dyn…

The Legend Of Hanuman Review: Top Notch Animation Grabs Your Frenzy In Hotstar’s Retelling Of An Age-Old Tale

X
Armaan Malik On Post-COVID-19 Life: “The Vibe Is Weird & Different…HollywoodArmaan Malik Asks, “Is It Normal To Not Know What Normal Is Anymore?” (Pic Credit: Facebook/Armaan Malik) Armaan Malik feels although the world is gra…
close