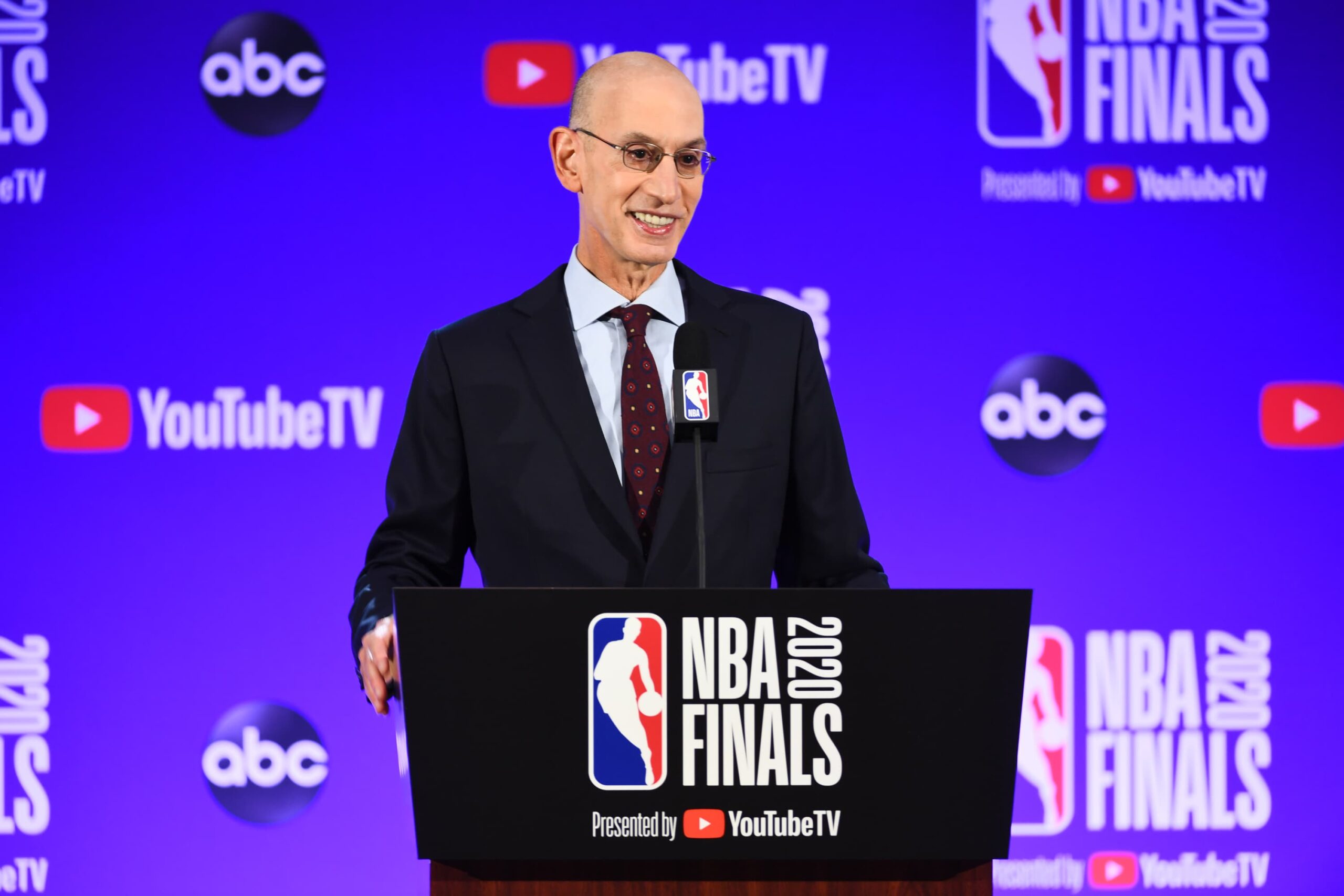 NBA Commissioner Adam Silver addresses the media prior to the game of the Miami Heat against the Los Angeles Lakers in Game one of the 2020 NBA Finals as part of the NBA Restart 2020 on September 30, 2020 at AdventHealth Arena at ESPN Wide World of Sports Complex in Orlando, Florida.

It’s the phrase National Basketball Association commissioner Adam Silver used in 2019 to help frame the attraction of becoming a sports owner. And Silver suggested the NBA could incentivize those looking to join its club, even on a minority level.

The NBA’s plan to lure private equity money is in motion, and it’s betting on the allure of owning limited partnerships in its clubs will pay off.

With valuations in clubs rising to astronomical levels, the NBA joined the private equity chase when owners approved a plan to allow investment firms to own stakes in teams. NBA executive J.B. Lockhart is one the individuals who oversees this strategy and the league picked Dyal Capital as its partner.

They way it works: The NBA rounds up stakes in clubs and sells them to private equity firms like Dyal, who can then technically sell the limited partnerships (LPs) to private investors. Last May, Barron’s reported Dyal was seeking to raise $2 billion to purchase the LPs.

Some in the private equity space praise the NBA’s move, and even attempt to connect it to a more global play down the line.

The pros and cons of PE

By turning to private equity, the NBA solicits more capital for its league, can strike quicker deals to assist with liquidity and finance its future endeavors.

Also, NBA valuations are skyrocketing. The average price of a club is now over $2 billion, and its last two franchises (Brooklyn and Utah) sold for an average of $2.45 billion when considering Nets owner Joseph Tsai paid $1 billion for the Barclays Center in Brooklyn in a separate deal.

Hence, the league needed to expend its investor base as even minority stakes are getting expensive.

“This provides the NBA, its member teams, its entire infrastructure with financial optionality,” said Chris Lencheski, the chairman of private equity consulting company Phoenicia and adjunct professor at Columbia University.

Allowing private equity investments will also help minority owners looking to sell and exit ownership groups. On the majority side, owners who want to recover from Covid-19 losses by can sell shares and benefit, too.

Lencheski, who also serves as CEO of Granite Bridge Partners’ Winning Streak Sports, sees the NBA’s global “economic moat” as a draw for investors as there’s unlikely to be any viable competition for high-level professional basketball. Plus the league is backed by global licensing, merchandise, sponsorship and approximately $2.5 billion in annual media rights income, which runs through the 2024-25 season.

But the move is not risk-free.

So should its media rights drop in price as cable subscribers continue to cut the cord, valuations could drop and investors can lose money on LPs. One sports banker pointed to 2009 when valuations dropped due to a bad economy as proof the NBA isn’t immune to a decline due to economic turmoil, either.

And few foreseen the abrupt stop to its estimated 40% in revenue due to the pandemic.

But it could have help from the public’s allure.

Anthony Davis #3 of the Los Angeles Lakers shoots the ball against the Miami Heat during Game Four of the NBA Finals on October 6, 2020 at AdventHealth Arena in Orlando, Florida.

Dyal and investment firm Owl Rock merged with Altimar Acquisition Corporation, a $275 million special purpose acquisition company (SPAC) currently trading on the New York Stock Exchange, allowing the combined firms to go public. The new firm is called Blue Owl, and public investors will soon be able to invest in it under the ticker symbol “OWL” on the NYSE later this year.

And one of its attractions will be its NBA fund.

Dyal did not respond to a CNBC request for comment, but managing partner Michael Rees spoke about the firm’s NBA strategy on a Dec. 23 U.S. Securities and Exchange Commission call announcing the plan to launch Blue Owl.

“We’re proud to be a partner, an exclusive partner, with the NBA, the National Basketball Association, where we’re the only approved buyer of a portfolio of minority equity stakes in the 30 teams in the NBA,” said Rees, according to the call’s transcript. “That business is just being launched, and we’re hoping to have our first closing in the not-too-distant future.”

“We think we can grow certainly a very attractive basketball strategy off of this platform, but also possibly expand to a broader sports business that could have tremendous upside,” added Rees, who will also serve as one of the co-presidents of Blue Owl.

It’s not clear what Blue Owl’s overall sports strategy is, nor how it expects to make a return on NBA LPs. A person close to their planning told CNBC it would purchase stakes in some clubs, not all 30 teams.

When discussing the NBA’s private equity play, a Wall Street CEO said the firms make no money on fiduciary capital until it sells something. The person requested to remain anonymous due to the sensitivity of discussing the matter publicly.

The CEO, who has an extensive history in private equity, also questioned how private firms would make any return on $2 billion. A long-time sports executive, who also requested anonymity, noted NBA teams can redistribute annual profits to new investors.

So, if a private firm is betting on sports teams as a long-term play, it could earn on clubs revenue while holding on to the LPs through dividends. Then, it could sell the LPs at a higher price.

And with the NBA such a global product, billionaires around world looking for an entry point into U.S. sports could be potential consumers of NBA accoutrements.

Paris Saint-Germain’s Qatari president Nasser Al-Khelaifi arrives for a training session at the Luz stadium in Lisbon on August 22, 2020 on the eve of the UEFA Champions League final football match between Paris Saint-Germain and Bayern Munich.

Private firms can purchase the LPs and then sell them on the secondary market. If the NBA goes the private equity route, there will be guidelines in place, but it will lose some control on who the LPs are sold to.

Foreign investors could be a way for firms to make money on the LPs.

There is chatter that points to Middle East investors as future buyers of the minority shares. The NBA prohibits sovereign state investment in its teams, but investors from Abu Dhabi, Dubai and Qatar have been linked to the league before. In 2010, it was rumored investors were interested in purchasing the Detroit Pistons.

Lencheski added the NBA could also use the private equity investment vehicle to examine individuals who could look to buy majority positions in teams at a later date. The sports executive used Tsai’s entry as an example. He paid Russian billionaire Mikhail Prokhorov $1 billion for a 49% stake in the Brooklyn Nets in 2018 before taking full control.

Lencheski pointed to David Tepper’s entry into the National Football League as another example.

“One of the many factors that certainly helped Charlotte’s ownership in the NFL was the minority interest initially in the Pittsburgh Steelers,” he said. “If David Tepper doesn’t see the way the Steelers organization operates, understands what a best-in-class organization looks like when he goes to his NFL colleagues and says, ‘I want to buy a team,’ he has the funds, but more importantly for the NFL, he understands the culture of a winning community-focused sports organization.”

The NBA appears bullish on its product. Live sports still keeps the cable model from shattering. The league continues to produce international superstars to protect its economic moat — $8.3 billion in revenue. And the NBA’s credit is in good standing.

The NBA’s new focus is expanding the list of those seeking ownership accoutrements via private equity.

“You get some of the benefits of being a team owner,” Silver told SBJ, according to SportsPro. “So it’s not just a pure, ‘What’s my return financial investment?’ Not that that’s not important, but try to come closer to some of the same reasons that traditional franchise owners buy into teams.

“Part of it is financial,” Silver said, “but part of it is the amenities, and the cachet, and the desire to be directly involved with these leagues.”