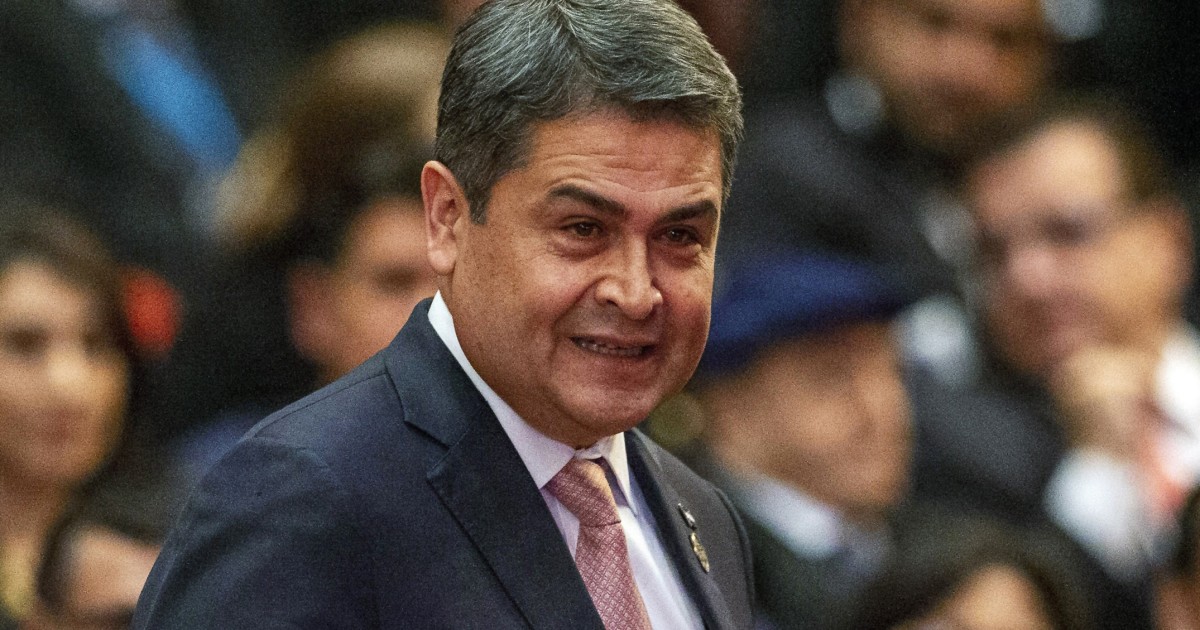 The United States has given Honduras hundreds of millions of dollars in security assistance in recent years to help the Central American country fight drug traffickers.

The shocking allegations, the latest of three major drug cases in which the president has been implicated, appear in a motion filed Friday in the U.S. Southern District Court in a case against an alleged Honduran trafficker arrested in Miami in March.

Prosecutors cite Hernández as a co-conspirator in the case, saying he accepted money in exchange for protecting a cocaine laboratory and drug loads headed north toward the U.S. They quote Hernández as saying he wanted to make the U.S. Drug Enforcement Administration think that Honduras was fighting drug trafficking, but instead he was going to “shove the drugs right up the noses of the gringos” by flooding the United States with cocaine.

The documents also accuse Hernández of public corruption, stating that he admitted in front of an unnamed witness that he had embezzled aid money from the United States through nongovernmental organizations.

President Trump has heaped praise on Hernández, who has visited the Oval Office multiple times, perhaps because he has been a willing partner in controversial Trump administration immigration measures. Under one agreement, Honduras receives non-Honduran migrants who have been denied a chance at claiming asylum in the U.S.

Hernández does not specifically appear in the court papers. But he is clearly identifiable as “co-conspirator 4” by references to his political position and as the brother of Juan Antonio Hernández, who was convicted of drug smuggling in 2019.

The president was named as a co-conspirator in the case filed in 2018 against his brother, too, with prosecutors alleging in that case that he accepted millions of dollars in bribes from drug traffickers including from Mexican kingpin Joaquín “El Chapo” Guzmán.

Hernández, 52, has denied all wrongdoing, saying cartel leaders have falsely accused him because he has successfully cracked down on trafficking.

“There has been a reduction in drug trafficking under President Hernández,” Luis Suazo, the Honduran ambassador to the U.S., said in an interview. “These allegations … don’t square with the results that Honduras has achieved in the fight against narco-traffickers while President Hernández has been leading the country.”

But the mounting evidence against him has sparked outcry in Honduras, where many worry that he may try to illegally extend his time in office in order to avoid prosecution by the U.S. Justice Department, which does not typically file charges against foreign leaders who are currently in office.

Hernández, who was elected in 2013, is supposed to step down this fall because of term limits. But various members of his government have proposed postponing the upcoming presidential election, citing the COVID-19 pandemic and widespread destruction resulting from two recent hurricanes.

Adriana Beltran, a Central America analyst with the Washington Office on Latin America, a think tank that advocates for human rights in the region, said she is worried Hernández may be trying to find “a way to remain in office to avoid prosecution.”

The allegations by U.S. prosecutors help explain why Hernández allowed the mandate for an internationally backed anti-corruption commission to expire last year, she said.

“The evidence of the president’s ties to drug trafficking is mounting and certainly helps explain why the president and members of the political elite have sought to undermine efforts to tackle corruption and impunity,” said Beltran.

A major question now is whether the U.S.-Honduras relationship will change under President-elect Joe Biden, who worked closely with leaders of the region including Hernández while serving as vice president from 2009 to 2017.

Under the Obama administration, Biden was tasked with addressing a dramatic uptick in child migrants from Central America. He helped secure $750 million in aid for Honduras, Guatemala and El Salvador, which he said would tackle the “root causes” of migration.

But the effectiveness of that aid, particularly the largest portion, which went to security assistance, has been called into question, in part because migration from the region has continued at high rates, and in part because Honduran military and law enforcement were accused of aiding drug traffickers and of human rights abuses.

A U.S. Government Accountability Office analysis of the effectiveness of the $2.4 billion in aid allocated to the region between 2013 and 2019 reported “mixed results.”

“Limited information is available about how U.S. assistance improved prosperity, governance, and security in the Northern Triangle,” the report said.

Biden has proposed further increasing aid to the region. As a candidate, he proposed a four-year, $4-billion investment plan for Central America modeled on the one he headed as vice president.

Back to Top
Close Add post
X
SNL’s cold open asks if anything in America still works…WorldAfter a year that seemed to last a decade, the month of January has somehow also managed to pack a lifetime’s worth of major historic events into a fe…

The president of Honduras was supposed to be a drug war ally. U.S. prosecutors say he helped move cocaine

X
China to send 3 lakh doses of Covid vaccine to Nepal…WorldThe Chinese Embassy in Kathmandu said in a statement that China has decided to provide 300,000 doses of Covid-19 vaccine under grant assistance to Nep…
close