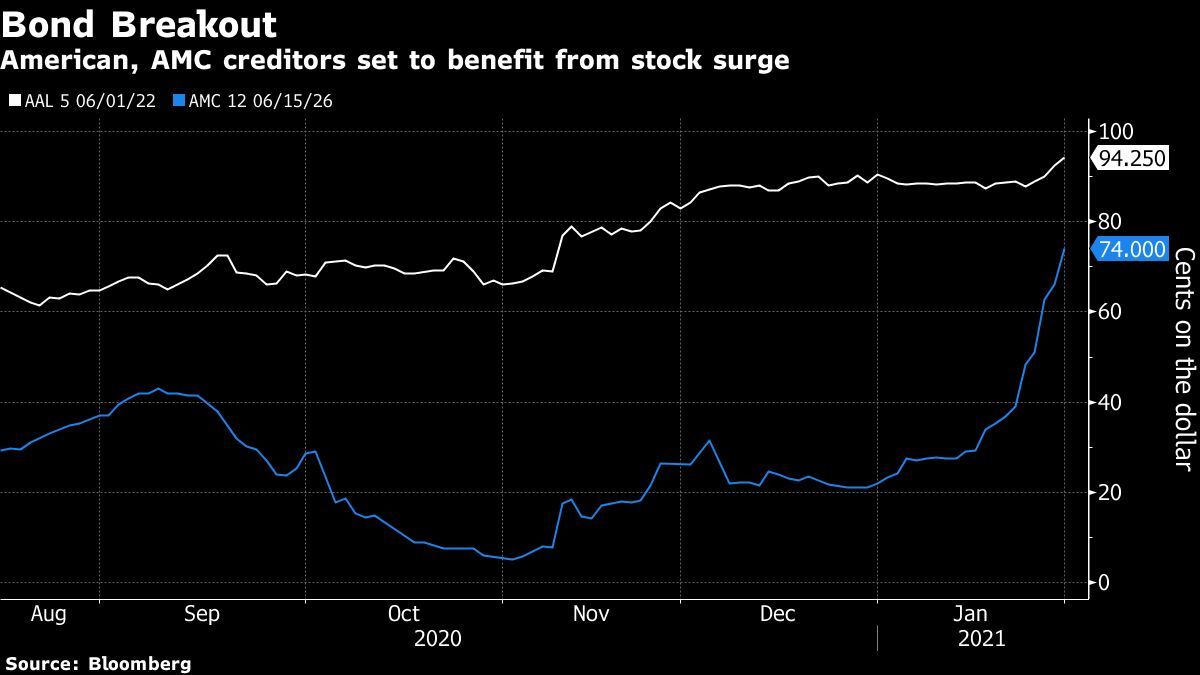 (Bloomberg) — It’s the kind of rescue that the most indebted companies in America can only dream of: a fresh injection of cash that doesn’t hurt their already depressed stock price or load even more costly debt onto their balance sheet.

Yet thanks to the army of day traders who use Reddit to tout and bid up out-of-favor stocks and squeeze short sellers, firms such as American Airlines Group Inc. and AMC Entertainment Holdings Inc. have found themselves on the receiving end of just such a lifeline.

Both took steps over the past week to sell hundreds of millions of dollars worth of shares and secure much-needed liquidity. Besides the companies themselves, there’s perhaps no bigger winner from the massive stroke of good fortune than their creditors. Just weeks ago many were staring at the possibility of significant losses as pandemic-fueled slumps had traders betting up the odds of default. Now the companies are suddenly in a position to raise fresh piles of cash to weather the storm, and could even use the funds to start paying down debt.

“We certainly didn’t have a row for ‘surprise equity offering’ in our AMC model,” said Bill Housey, a senior portfolio manager at First Trust Advisors, who used to own AMC debt but fully sold out of his position in recent days. “Companies that were otherwise facing real financial challenges are finding an unexpected source of capital.”

It’s no coincidence that some of the most troubled borrowers are now the ones benefiting the most from the retail-driven rallies. Their huge debt loads, combined with the devastating impact that Covid-19 has had on their ability to generate revenue, were among the reasons their stocks were so heavily shorted in the first place.

American Airlines revealed plans on Friday to sell as much as $1.1 billion of stock through what is known as an at-the-market program, which allows companies to issue additional shares at market prices. The announcement came after their stock was up as much as 38% at its peak last week.

Just a couple days earlier, AMC said it had raised more than $300 million through a similar program. Investment firm Silver Lake, one of the company’s main creditors, also seized on AMC’s surge to convert $600 million of bonds into equity, before selling the shares in the open market for a gain of over $100 million.

Most companies benefiting from the surge in their stock prices should consider taking similar steps, especially if they face near-term debt maturities or have liquidity challenges, according to Lloyd Sprung, head of debt advisory and restructuring at UBS Investment Bank.

“They can use the cash to pay down debt, selectively fund open-market debt repurchases, tenders or targeted exchange offers,” he said.

American Airlines, the most indebted major U.S. carrier, paid 11.75% in June to raise $2.5 billion via the bond market, and resorted to equity offerings and convertible notes to raise billions of dollars of additional liquidity.

AMC, for its part, earlier this month secured a 400 million pound ($547 million) loan tied to its Odeon Cinemas unit that pays a rate of 10.75% in the first year before climbing to 11.25%. The deal is part of the $917 million the company has assembled since mid-December as it tries to stay solvent until vaccines bring back moviegoers.

After rallying the past four days, American Airlines’ 5% unsecured notes due June 2022 now yield less than 1,000 basis points more than similar-maturity Treasuries for the first time since March 2020. AMC’s benchmark 12% bonds due 2026, meanwhile, have climbed from about 22 cents on the dollar at year-end to 74 cents on Friday, though they still yield over 18%.

Traders are now keeping their eyes on other Reddit picks, such as GameStop Corp., Express Inc., Bed Bath & Beyond Inc., and Naked Brand Group Ltd., for potential stock sales after shares further extended run-ups on Friday.

“It’s just so fortuitous,” said First Trust’s Housey. “While the trades may have hurt the shorts, in many names they helped the creditors.”