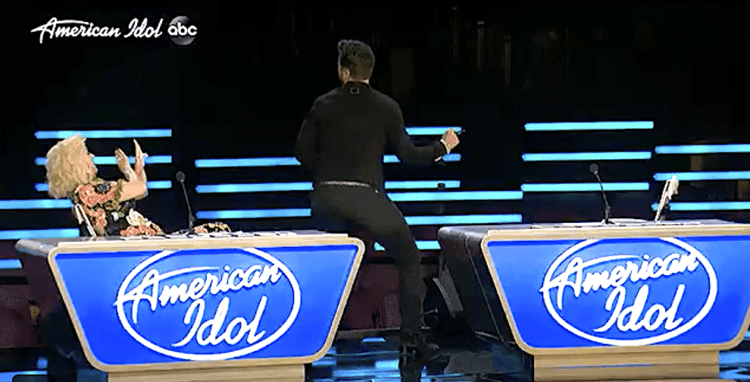 The American Idol Season 19 top 24 were confirmed Monday, the second night of the Showstoppers round, and it was a bittersweet evening filled with early goodbyes. The episode began with a resolution of Sunday’s cliffhanger, with the two rocker girls who’d been inexplicably pitted against each other, Casey Bishop and Alanis Sophia, both making it through. But many other contestants weren’t so lucky.

Among the cuts in what host Ryan Seacrest declared “the fiercest competition in Idol history” were quirky girls EmiSunshine and Lizzy O’Very; Gabby Barrett superfan Laila Mach (whose ill-advised song choice, Alicia Keys’s “If I Ain’t Got You,” was just way too big for her); badass single mom Althea Grace (that elimination was a big mistake); both Ronda Felton and Funke Lagoke (who hit some uncharacteristic wonky notes, possibly because their focus had been thrown off after Funke’s freak accident during her duet with Ronda last week); and TikTok star Benson Boone (who is rumored to have dropped out, possibly because he got a more tantalizing offer from Imagine Dragons). Meanwhile, we may never find out what happened to other seemingly promising singers whose Idol narratives abruptly ended without closure, like Heather Russell, Abby LeBaron, Xavier Washington, Calvin Upshaw, Re’h, Liv Grace Blue, or Michael Gerow.

Most of Monday’s eliminated contestants handled their rejection with class; only blindsided pop-rocker Camille Lamb pitched a hissyfit, petulantly claiming that she was “more of an artist” than many of the singers who made the top 24 — when in fact her basic Bad Company cover this week had been total Coyote Ugly happy-hour house-band fare. Anyway, Final Judgment night is always tough for everyone on Idol. But thankfully, judge Luke Bryan was there to provide some much-needed comic relief.

Inspired by contestant Colin Jamieson, a former boy band member, at one point Luke broke into an impromptu a cappella performance of New Kids on the Block’s “The Right Stuff” — or maybe it wasn’t so impromptu, since the country superstar seemed to know all the lyrics (surprising everyone, including himself) and was even raring to go with Joey, Jordan, Jonathan, Donnie, and Danny’s iconic side-shuffling dance routine. And it didn’t look like this was the first time that Luke had busted those moves, either. It actually seemed like this not-so-secret NKOTB fanboy had been readying his goofy boy-band tribute ever since he joined the Idol cast in 2018, and had just been waiting for the right opportunity to strut his right stuff. So, if NKOTB ever want to recruit a sixth member, let this serve as Luke’s own audition.

And Luke kept the dance party going, right up until the night’s second-to-last performance by returning contestant Drake McCain. When Drake took a risk by sassing and shaking it in earnest to Luke’s own 2011 bro-country party anthem “Country Girl (Shake It for Me),” Luke hopped up and shook his own groove thing, possibly taking inspiration not only from Drake’s bold performance but from German underwear model Mario Adrion’s jokey Chippendales-like audition and Pitbull-wannabe showman Yurisbel earlier this season.

Sadly, while Drake’s Showstopper performance was a ton of fun, he sacrificed his vocals for stage antics, so the party was soon over for him: Drake was eliminated, for the second time in Idol history, at the end of the episode. But by the end of the episode, we did have our final, official 24. Joining Sunday’s previously announced 12 semifinalists (Alanis and Casey, plus Alyssa Ray, Jason Warrior, Andrea Valles, Chayce Beckham, Caleb Kennedy, Wyatt Pike, Cassandra Coleman, Beane, Hannah Everhart, and Graham DeFranco) are the dozen contestants listed below.

Willie Spence, “I Was Here”

This powerhouse sauntered onstage in a suit, just as Luke had advised, looking ready to collect his long-dreamed-of Grammy. Judge Lionel Richie, watching remotely from home due to a potential COVID exposure, was probably sorely disappointed to not be able to witness this tour de force in person, but he whooped it up in his living room. There was no cliffhanger here; it was so obvious that Willie was a top 24 shoo-in that the judges just delivered his good news straight-up. “You have the gift from God,” Luke noted. Trust me, no one will ever forget that Willie was here.

After Mary’s adorable first audition, she “fumbled the ball” in Hollywood, committing the cardinal Idol sin of forgetting her words. However, she had already amassed enough goodwill to get a “free pass” from the judges. This wasn’t quite the comeback performance she was hoping for — she needs to work on her dynamics, rather than crank everything to 11 all the time — but as Luke told her, she has “a little bit of the magic.”

Hunter, who harbors a huge fear of failure because of his musician parents’ difficulties in the record industry, had struggled throughout his Idol journey, second-guessing himself despite his own obvious God-given talent. He was really psyching himself out and seemed to have lost his mojo, but then he decided to just go for broke and have “moment.” And man, what a moment! His piercing Noah Cyrus cover had me breaking out in goosies, as former Idol judge Jennifer Lopez used to say. Katy Perry looked shocked, Lionel was cheering in front of his computer monitor, and Luke told Hunter, “No one else sounds like you.” Hunter need not fear failure after this.

Grace also second-guessed herself, after deciding to sing a “smaller” song instead of her usual power balladry. But a “small” and “subtle” performance by Grace Kinstler standards is a massive diva showcase by almost any other contestant’s. I thought this dedication to her late dad was very Kelly Clarkson circa “Piece by Piece,” so real and so commanding — and I was therefore gobsmacked when the judges did in fact take issue with the song choice, confirming Grace’s doubts. Luke said this “wasn’t her best,” which was utter madness, but even if that were true, Grace “not at her best” was still excellent enough to advance her to the top 24.

Deshawn Goncalves, “Over the Rainbow”

This was a bit of a disappointment, a snoozy, slowed-to-a-crawl, dinner-theater performance that got lost in the shuffle. But Deshawn is undoubtedly one of the greatest singers of this season, so he had already earned his spot. I just hope he pumps up the energy next week.

Colin’s former boy band, Kik-it, never got to the level of New Kids on the Block, but apparently Colin was popular enough to have a fan-created Twitter account dedicated solely to his butt. But does he have the right stuff for Idol? I thought his first audition was too gaspy, but I loved his performances last week; this week, he was back to doing that weird wheezing thing, to the point of distraction. I do hope he gets his breath control sorted out, because he otherwise has major potential. He always exudes a certain sense of joy and wonder, and I appreciated this week’s left-field Fall Out Boy song choice (as did Warped Tour veteran Katy).

Ava August, “Ghost of You”

Ava took a big chance doing an original song — with no band, just acoustic guitar and her voice, while everyone else opted for full-band accompaniment. But she stood out, and the risk paid off. This was an impressively intense, brooding, and fully realized song for a 15-year-old to write. Katy the hater insanely said “Ghost of You” wasn’t “all the way there as a song just yet,” but as Luke pointed out, Ava is “interesting” and has “something special.” She could be this season’s Maddie Poppe.

Liahona Olayan, “Me Too”

After falling into a funk last week after her older brother/audition partner was eliminated from the competition, Liahona got her groove back this week. Most contestants would not have been able to sail into the top 24 with a half-rapped Meghan Trainor novelty hit, but Liahona always excels when she does playful, bouncy numbers. “Me Too” effectively showcased Liahona’s cutesy, spunky vibe, but whether her poppy performance style will be enough to keep her in the running against brash belters like Willie and Grace remains to be seen.

Speaking of brash belters, Madison decided to push herself this week because, unlike nervous contestants like Mary Jo and Hunter, she really “believed she could do it.” I believe she could have taken it even further. But she did what she needed to do to get noticed in a season when she’d received little previous screentime.

I liked Alana’s rock ‘n’ soul edge and big attitude, and she too made an impression after receiving an especially brutal cutting-room-floor edit this season. But on Idol, confidence and attitude can unfortunately be misinterpreted by viewers as arrogance, and viewers haven’t been given the chance to truly connect with Alana yet. She could be one to watch, but her time on the show might not last much longer.

Anilee also hasn’t gotten much airtime since she dedicated her first audition to Season 10’s James Durbin (who, like Anilee, has Tourette’s). Anilee’s Final Judgment sit-down with the judges wasn’t even shown Monday, likely because the rumors are true that she was a last-minute replacement after Benson Boone quit. (A representative for Idol did not respond to Yahoo Entertainment’s request for comment.) Regardless of the circumstances, Anilee should have made the top 24 in the first place. She is a phenomenon. I hope she makes it far, to make up for her lack of TV exposure in Hollywood.

Cecil snagged the last spot — the judges brought him and Drake McCain into the Final Judgment room together, because they apparently really didn’t think there was enough space for two country guys this season. And while Drake will be missed, I understand why Cecil’s fiery Leon Bridges cover gave him the advantage. I’d underestimated this kid, because Cecil went deep here. He’s raw and he’s green, but he could be this season’s dark horse.