Home General The rise of working-while-working out from home

The rise of working-while-working out from home 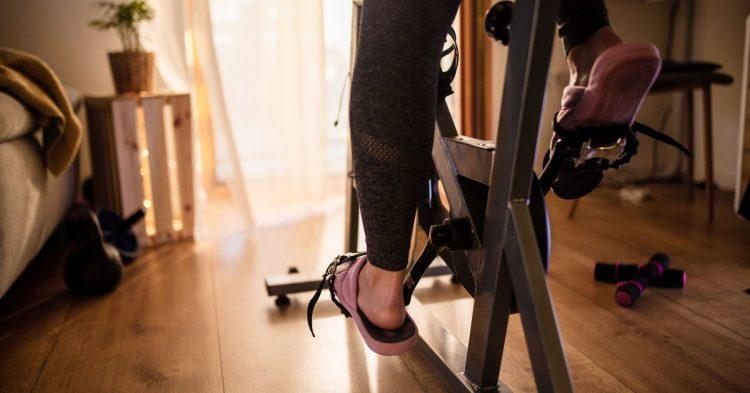 It’s a desk! It’s a bike! It’s a … desk bike! While most gyms and fitness studios across the US were shutting their doors (and then prematurely reopening them in some states), the “working out while working from home” category of merchandise was climbing toward massive mainstream appeal. Thanks in part to millennials’ obsession with bettering themselves, the self-improvement industry is valued at $11 billion. We’re committed to a lifetime of optimization, so we’re putting pressure on ourselves to make the most out of isolation. Because if we’re not doing something — or everything, all at once — then clearly we’ve wasted a tremendous amount of time that we’ll never ever get back, right?

For many, combining work time with workout time is a no-brainer. It’s a natural crossover, accelerated by life in lockdown. In a survey conducted by the accounting and consulting firm PwC, 71 percent of their millennial employees admitted that work demands interfered with their personal lives. There’s no better example of how this drive for productivity has manifested than Flexispot’s cycle desk bike, which went viral on TikTok thanks to Jules Nguyen.

After Nguyen included the bike desk in an Amazon haul, as part of a partnership with the e-commerce megaretailer, it sold out within the first 24 hours of uploading the video. The remaining inventory on Flexispot’s website was out of stock by the next day and then went on backorder until the end of the year. Based on tracking from her affiliate link, she has sold about $12,000 worth of bikes on Amazon. (Nguyen won’t know the total amount until the rest of the orders are shipped in January 2021.) Since posting the video in October, it has racked up 2.3 million “Likes” and helped Nguyen to gain 155,600-plus followers on TikTok.

With her normal life as a travel-turned-lifestyle blogger completely changed by the pandemic, Nguyen needed something easy for multitasking that would allow her to “move throughout the day but still work.” She wasn’t interested in a treadmill desk (“I can’t even walk and text at the same time so I don’t think that would have been good for me,” she says), and had been considering the bike desk when Amazon reached out. The 28-year-old says it was a perfect fit. “I gained a lot of weight because of Covid and I sit at my desk and work from home for what it feels like all day,” she explained. “Working for myself, I don’t have a 9 to 5, I just work throughout the day so I ended up not really exercising because gyms weren’t open.”

As far as personal trainers are concerned, there’s not much to dislike about modern fitness technology. Thea Hughes, a strength and wellness coach at Session and the founder of 6FT Training Club, sees devices like the desk bike as a great way for the “everyday athlete” to get their joints in motion. For former commuters who are now spending the majority of their day sitting in front of a screen, she thinks this form of steady state cardio is “hugely beneficial.”

“Do I think it’s the most effective way to do it? It probably depends on how much time you have, what your interests are, and where you’re at,” she explained. “It looks like there’s a tension knob to increase the resistance so it’s going to be just as effective in theory as going out for a walk.” But, she says, “What you’re not getting is the sunlight, fresh air, and some of those other stimuli that do obviously have proven effects of boosting mood.”

During the first phase of lockdown, the most basic fitness equipment like weights, kettlebells, mats, props, and other affordable accessories was flying off the shelves at major retailers like Amazon, Target, and Dick’s Sporting Goods with a massive boost in sales of 170 percent. The increased interest in at-home workout gear during the pandemic reportedly spiked by 500 percent, forcing some brands to implement preorders to account for production delays on high-demand items. Nostalgic outdoor activities like roller skating even made a comeback, which led to Moxi Skates seeing a sales growth of 1,000 percent since March. With desk chairs becoming obsolete — studies have shown that sitting sedentary for too long is bad for your health — some millennials upgraded their stations with ellipticals and treadmill desks.

Hughes points out that, in general, “our body can’t tell the difference from a Bala bangle or a 3-liter jug of water or a resistance band” so that shouldn’t limit consumers in terms of their product selection. The real hack with fitness is to set up daily habits to follow that will support a desired outcome and then “integrating [equipment] into your plan.” She adds, “People like to get items and then be like, ‘Oh, all of my problems are solved,’ but then the said object just stays in the corner.”

Kira West, a fitness insider and community cultivator, thinks that “from more of an investment perspective, once you’re more clear on your goals that’s when you should think about spending more money.” She believes that the attachment to many of these shiny tools is rooted in a sense of spatial differentiation that sometimes borders the line of elitism. As the pandemic continues, many of our living spaces have transformed into makeshift fitness studios full of tech-savvy gear like smart mirrors and jump ropes that monitor our every move while meeting the intersection of functional and fashionable. We strap on colorful bangles, sandbags, and belts to our wrists, ankles, and waists just to feel something — validation from everyone on Instagram bearing witness to the fitness.

So why wouldn’t peak functionality extend to combining work and fitness? “Millennials, for good reason, feel entitled so we’re like ‘Why can’t we have a desk and a bike? Why can’t we do it all?’ I think that’s an awesome attitude, but it’s sometimes funny to see what it looks like,” West said, highlighting the many, many products that attempt to bring the studio experience home.

Nick Bognar, a therapist who specializes in couples therapy, trauma, men’s mental health, and codependency, mostly attributes the increased attention on fitness right now to anxiety. When thrust into a period of uncertainty, our first instinct is usually to sort out what we can realistically control. “In those moments, many of us despair, and many others scramble to find the things we think we can control and throttle them,” he said. Since nobody was prepared for living through a pandemic, everyone is figuring out how to overcome being blindsided by such a huge obstacle.

With productivity levels fluctuating in response to constant stress, many of us have turned inward to reconsider what impacts our overall state of well-being. We can only sit with ourselves if we’re constantly in motion because of the collective feeling of being stuck in place. So many of us treat our bodies like machines because we crave the consistency of structure and following a stable routine. It’s not enough to have our basic needs like food, shelter, and security met — we need more in order to feel fulfilled. Living in a country that runs on capitalism, this conditioning has turned us into success addicts in pursuit of the “health is wealth” mentality.

Jason Fierstein, a private practice psychotherapist, argues that the drive to work out while working from home is also a reflection of our self-worth. “Working out from home allows us to experience that sense of productivity. … We can still multitask through the pandemic and be our ever-productive selves,” he explained in an email. “Being able to multitask, we unconsciously validate ourselves for being these perfectly productive people, overcoming the adversity in which we’re faced, which adds to our self-validation.”

“Being able to multitask, we unconsciously validate ourselves for being these perfectly productive people”

But one of the biggest challenges with working from home is doing everything in the same room. Prior to the pandemic, West used to work out of an office and exercise in a gym because “changing places and spaces was so helpful for me.” Now, she’s forced to do it all within her apartment. Her workouts have had to evolve. While living in New York, she found it difficult to wake up early to “commute to the living room” for a morning workout. She adds, “I was also trying to replicate something that didn’t exist.”

Tess Brigham, a therapist and millennial life coach, acknowledges that some people are struggling with working out at home because it doesn’t quite feel the same. For many of her clients, fitness is a vehicle for creating a sense of certainty in their lives, which she views as a healthy coping mechanism. “I’ve certainly had clients who really enjoyed what it was like to go to a gym and the people that they knew there,” she said. “For them, losing all that was huge.”

To some degree, the “working out while working from home” subcategory has cultivated an emotional support group for those grieving the death of the gym with the hope that movement will be the best form of medicine. (ClassPass almost feels like a distant memory from a pre-pandemic past.) The lack of camaraderie can take on its own toll and is something else that may take longer to recover from.

Gyms won’t be obsolete in the future, but it will be a long time before they look and feel the way they used to. In the meantime, people should focus on creating an environment that works for them at home regardless of trendy equipment. Even if it’s just a corner in a room, Hughes encourages people to reexamine their current layout and make a room feel more like a sanctuary so it’s a place that you actually want to be. The next steps from there involve “creating a positive headspace,” allowing yourself to have “sacred time for yourself,” and setting goals of what you want to accomplish from a workout. It’s imperative not to put too much pressure on ourselves to live up to a fantasy of constantly working out now that we have an indefinite amount of time at our disposal.

“The other thing I’ve noticed about millennials is they definitely feel like everything in their life has to be productive,” Brigham concludes. “I think it’s interesting — like are you exercising because it’s the most efficient way for you to work out or are you doing it as a way of not really feeling your feelings?”