Home EntertainmentTV The Second Impeachment Trial Of Donald Trump: A Preview Of What’s Happening And What To Expect

The Second Impeachment Trial Of Donald Trump: A Preview Of What’s Happening And What To Expect 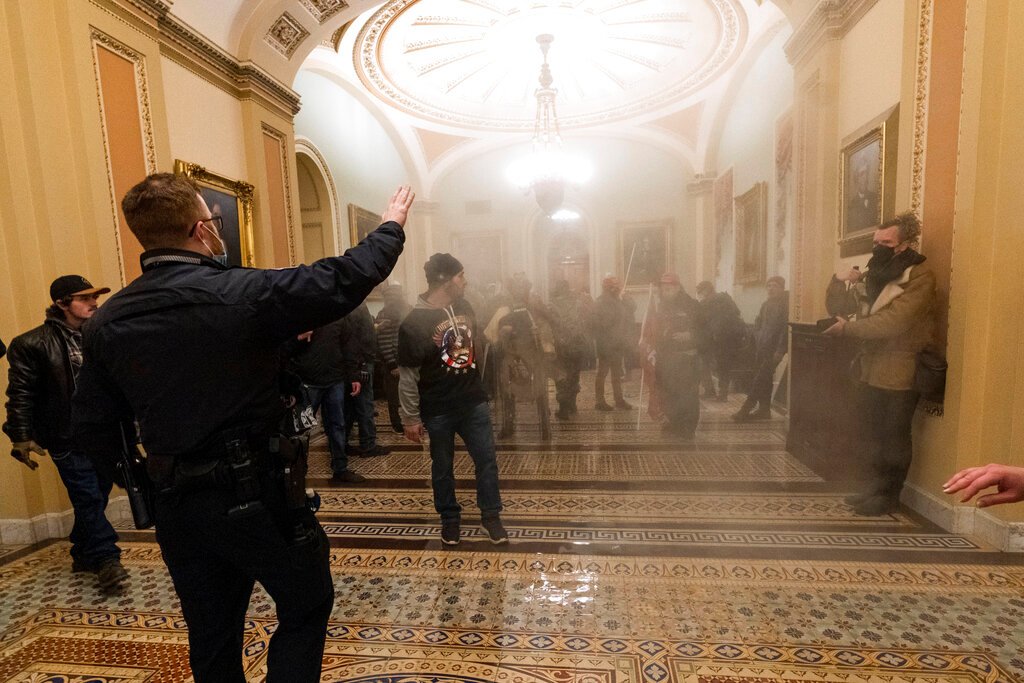 We’ve gone for just over two weeks now without hearing much of anything from Donald Trump: Banned from Twitter, absent from Fox & Friends call ins, the former president has been unusually low key at his Mar-A-Lago estate in Florida.

That will change on Tuesday, when he will once again be at the center of the media spotlight, even if he’s not a presence live and in person.

For only the fourth time in American history, the Senate will start an impeachment trial of a president — and it will be a first for a former commander in chief.

Broadcast networks are planning special reports, while cable and streaming services networks will provide complete feeds of the proceedings.

It was just over a year ago that Trump was acquitted in the Senate for his first impeachment, and there is every expectation that will be the same verdict again.

The proceedings themselves have the makings of a much different kind of drama, first and foremost because the senators, who will act as jurors, were themselves witnesses to the Jan. 6 Capitol siege that triggered the latest action against Trump. There is an opportunity for a trial that examines just what led to that day and what happened, yet there has been a lot of chatter that Democrats will make this a speedy proceeding, perhaps even without calling other witnesses.

Here’s an explainer, and what to expect over the coming days:

What is impeachment? Impeachment is the process for removing a president who violates his or her oath of office by committing “high crimes and misdemeanors.” That phrase was left intentionally vague, but scholars have long argued that it means that impeachment is not limited to actual crimes, but violations of the Oath of Office like abuse of power.

The House of Representatives has the power of impeachment — which essentially acts as an indictment of a president. If a president is impeached by a simple majority in the House, the articles then are delivered to to the Senate. If 2/3 of the Senate votes to convict the president, the president is removed from office.

So far, a president has been impeached only four times — Andrew Johnson in 1868, Bill Clinton in 1998 and Donald Trump in 2019 and 2021. None has been removed from office. Richard Nixon resigned in 1974 before the full House voted on articles of impeachment.

What is Trump’s charge? On Jan. 13, Trump became the first president to be impeached twice. The House acted quickly, with the charge of inciting the insurrection at the Capitol a week earlier. According to the House impeachment report, Trump’s misdeeds are greater than what he said at a rally that preceded the siege; they also cited Trump’s attempts to reverse the outcome of the 2020 presidential election by among other things, pressuring a top Georgia state official into tossing out results that favored Joe Biden. According to a recording of a phone call, Trump went so far as to say that the Georgia Secretary of State Brad Raffensberger should be “finding him votes.”

Why bother? What makes this trial so unusual is that Trump is no longer president, so he can no longer be removed from office. On Jan. 26, 45 Republicans voted in favor of a resolution declaring the proceedings unconstitutional for that very reason.

Even out of office, Trump faces prohibition from running for office. The Constitution states that the punishment for a Senate conviction “shall not extend further than to removal from Office, and disqualification to hold and enjoy any office of honor, trust or profit under the United States.” Democrats made clear in their article of impeachment that they were seeking to bar Trump from the presidency again.

Who presides?: The Constitution says that the Chief Justice shall preside over the impeachment trial, but that will not be the case this time. The reason? Trump is no longer president, so the trial will proceed like one of other elected officials and judges. Sen. Patrick Leahy (D-VT), the president pro tem of the Senate, will preside.

Who will be front and center?: Rep. Jamie Raskin (D-MD) is the lead impeachment manager, taking on the role of the chief prosecutor, but a half dozen others are on the Democrats’ team: Diana DeGette, David Cicilline, Joaquin Castro, Eric Swalwell, Ted Lieu, Stacey Plaskett, Madeleine Dean and Joe Neguse.

Trump’s team will be entirely different from those who defended him in last year’s trial. His attorneys are Bruce Castor and David Schoen. Castor previously served as the district attorney in Pennsylvania and, during his tenure, declined to prosecute Bill Cosby on claims he drugged and sexually assaulted a woman in his home. Years later, one of Castor’s successors did, and Cosby eventually convicted. Schoen was on the team that represented Roger Stone, who was eventually pardoned by Trump.

What will they argue?: The impeachment managers likely will lay out a very vivid account of what happened on Jan. 6, keying in on key phrases of Trump that day, including when he told the crowd to trek to the Capitol and that “if you don’t fight like hell you’re not going to have a country anymore.” They also will argue that the 14th Amendment prohibits any person who has engaged “in insurrection or rebellion” against the U.S. from holding office. Expect lots of video of the events of Jan. 6, including emotional appeals to remind Senate Republicans on why it is critical to hold the former president accountable.

Trump’s team, meanwhile, already has argued that Trump was merely exercising his First Amendment constitutional rights in his pre-siege rally, based on his belief that the election was stolen from him. They also plan to argue that the trial is unconstitutional. “We’re trying to win a case on a bunch of procedural objections,” Castor told Reuters last week.

The defense’s free speech argument has drawn pushback from a number of First Amendment lawyers, who say that it is legally dubious.

Will witnesses be called?: That’s the big unknown. Will Capitol Police officers be called? Or those at the White House? Or will there be witnesses at all?

Last year, Republicans rejected efforts to call witnesses at Trump’s first impeachment trial, over the strong objection of Democrats. One potentially key figure, John Bolton, had said he would appear if subpoenaed.

This time, it is Democrats are in control of the Senate and ostensibly would have the votes to call witnesses but, in the interests of time, they may not to do so. There is some pressure on the party to move quickly through the trial, so as to not delay the passage of Covid-19 relief and other Biden priorities. Biden himself has already expressed doubts that there will be the votes to convict Trump.

Trump himself has rejected a request that he himself appear at the trial.

But rushing through a trial would be a big missed opportunity, according to Tim Naftali, associate clinical professor of public service at New York University and a CNN presidential historian. The co-author of Impeachment: An American History, Naftali wrote in an op ed that “Democrats need to work across the aisle and reach out to the 10 Republicans in the House who voted to impeach Trump for a second time and the five Senators who voted in favor of proceeding with the trial. Together, they could coordinate a strategy to introduce witnesses and weaken Trumpism, regardless of the outcome of the trial.” There also would be a chance to obtain documentary evidence, as Trump cannot stonewall in the way he did for his first impeachment. His executive privilege now extends only to presidential records, and not to federal agencies.

In an interview, Naftali said that a trial, especially with all of the news coverage, is a potential “missed opportunity for public education and it opens the opportunity for Donald Trump to engage unwarranted victory dance.”

“If Nancy Pelosi and Senator Schumer have decided that this trial must go froward but it should be short, they should be preparing some sort of investigation around January 6,” Naftali said in an interview. “They should not lose the momentum.”

When will the Senate meet?: The trial will start at 1 PM ET on Tuesday, but the Senate has to set rules for the proceedings, such as the amount of time each side will have for arguments and how long senators will have to ask questions. Past impeachment trials have required all senators to be present, attentive and quiet throughout the proceedings.

Who to watch out for: Mitch McConnell, the Senate minority leader, has made statements indicating that he believes Trump was responsible for the Capitol siege. If he were to vote yes on conviction, that would be a big deal and could mean that others join him. But McConnell already voted for the resolution to declare the proceedings unconstitutional, which would give him a procedural out even while believing Trump committed impeachable offenses.

Susan Collins, Ben Sasse, Patrick Toomey, Lisa Murkowski and Mitt Romney voted against the resolution, and they are seen as the most likely Republican votes for conviction. That still would fall far short of conviction.