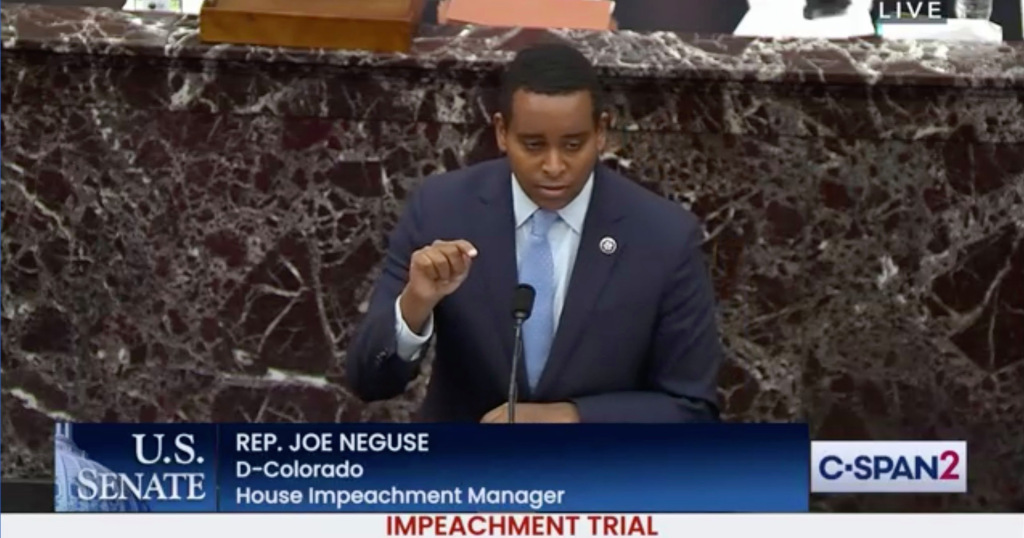 The second day of Donald Trump’s impeachment trial began with Democrats again turning to vivid video to make the case that the now-former president inciting a mob to storm the Capitol on Jan. 6.

The impeachment managers — acting as prosecutors in the case — are leaning in heavily on the sites and sounds of that day, and have even warned that some of the videos they plan to show will require viewer discretion.

Rep. Joe Neguse (D-CO) presented clips of Trump repeatedly claiming over months the “big lie” that the election was stolen. That culminated in the rally at the Ellipse, when Trump told the crowd, ‘if you don’t fight like hell you’re not going to not going to have a country anymore.”

He followed with clips of rioters saying that they were following what Trump wanted. But even after the attack, Trump continued to incite, Neguse said, tweeting to the mob, “We love you.” Neguse then read through indictments of some of the rioters to make the case that they sought to kill Vice President Mike Pence and House Speaker Nancy Pelosi.

The House impeached Trump a week after the insurrection, charging him with inciting the riot. Although it is unlikely that Trump will be convicted and barred from running for office again, the impeachment managers are seeking to present a case that triggers the emotions of senators, themselves witnesses to the attack, as well as viewers on TV and social media who otherwise may not have been watching the trial proceedings.

“This case is much worse than someone who falsely shouts ‘fire’ in a crowded theater,” Rep. Jamie Raskin (D-MD), lead impeachment manager, said as he opened arguments. “It’s more like a case where the town fire chief, who is paid to put out fires, sends a mob not to yell fire in a crowded theater, but to actually set the theater on fire.”

He described a Capitol police officer who fought against the rioters for hours, only to break down crying in the Rotunda later in the day. Raskin said that he said, “I got called an N-word 15 times today.”

Democrats reportedly plan to show security footage from Jan. 6 as they highlight the scale of the violence that day. Perhaps the most memorable moment of the first day of the trial on Tuesday was a 13-minute video of Trump’s speech before the riot and the chilling aftermath, as crowds breached Capitol security and went on a rampage looking for lawmakers.

Inside the chamber, Sen. Josh Hawley (R-MO), also facing criticism for inciting the attack that day, watched the proceedings from the galley, not from his desk on the floor, and went through a series of files. Most senators, wearing masks, listened intently as Raskin opened the proceedings. Sen. Lindsey Graham (R-SC), one of Trump’s steadfast supporters, shifted in his seat, looking around the room at points and down at his hands. He later took notes and showed one to the senator next to him, John Barrasso of Wyoming.