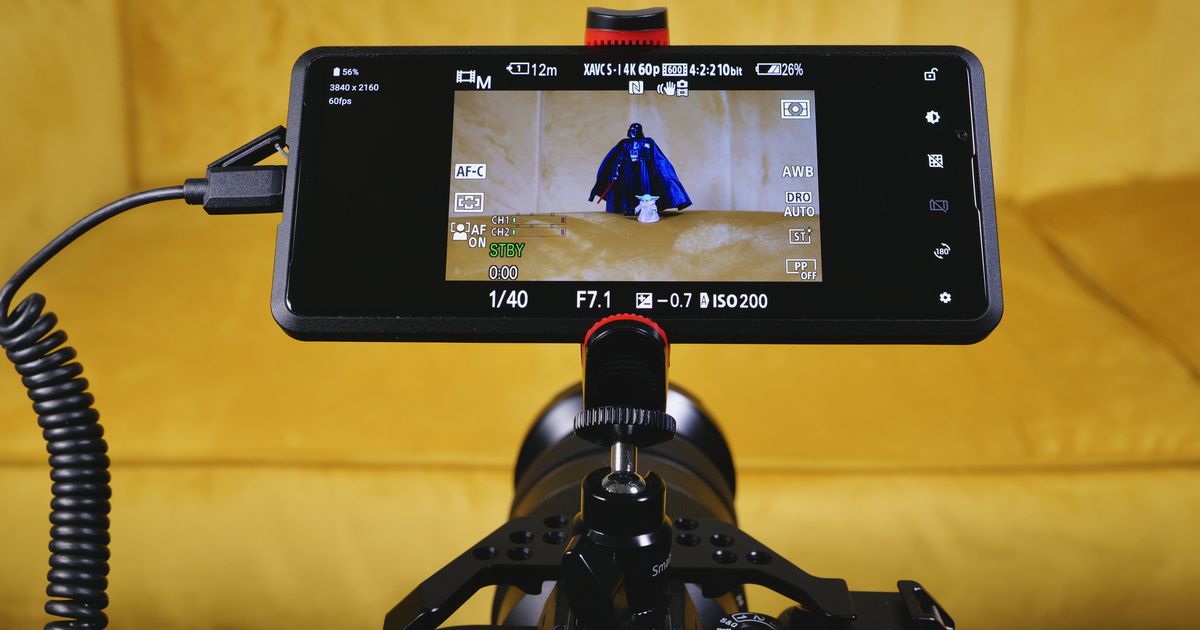 Over the past few years, with phones like the Xperia 1 II (read as “one mark two”) and the Xperia 5 II, Sony’s moved away from mainstream appeal and aimed itself at photo and video enthusiasts. The new Sony Xperia Pro is the most extreme example of this move to date. The $2,500 phone (which converts roughly to £1,830 or AU$3,250) isn’t meant to compete with the likes of the iPhone 12 Pro Max or the Galaxy S21 Ultra. Its HDMI port transforms it from a phone into several other devices for photographers, videographers and live broadcasters.

Remember in 2007, when Steve Jobs first announced the original iPhone? He teased the audience saying that he had three revolutionary products to release: a widescreen iPod, a phone and an internet communicator. I’d be the first to stop any comparisons between the Xperia Pro and the original iPhone. But following Jobs’ formula, the Xperia Pro is four products: a phone, a camera monitor, a speedy photo file transfer device and a 5G machine suitable for broadcasting and livestreaming.

Stay in the know

Get the latest tech stories with CNET Daily News every weekday.

The Xperia Pro aims to fill the void left by the 2018 Red Hydrogen One phone, which lost itself in the world of 3D (or 4V as Red called it) and disappointed filmmaking enthusiasts and professionals who hoped for the ultimate video recording phone. Aside from a cameo on Dominic Toretto’s dashboard in the F9 trailer, the Hydrogen line of phones shut down at the end of 2019 when Red’s CEO and founder Jim Jannard retired.

I got my hands on a preproduction Xperia Pro, which only had support for mmWave 5G (the final phone will support both sub-6 and mmWave 5G). The Pro is essentially an Xperia 1 II repackaged into a new and bigger body, complete with the first ever micro-HDMI port on a phone. The back and the sides of the phone are covered by what seems like a built-in case. Gone is the glass back on the Xperia 1 II.

The Xperia Pro has a dedicated shutter button, a new shortcut button and a side-mounted power button and fingerprint reader. It has the exact same cameras as the Xperia 1 II. Powering the Pro is a Snapdragon 865 5G chip and 12GB of RAM. There’s an easy-to-open dual-SIM card tray that can also be used with a microSD card for extra storage. Even before you connect a dedicated camera to its HDMI port, the Xperia Pro is capable of taking excellent photos and videos.

On paper, the HDMI input along with the Xperia Pro’s 6.5-inch 4K display and 5G connectivity make it an ideal companion for photographers, video shooters and content creators. There’s so much to test and I’m really looking forward to it.

The Xperia Pro’s $2,500 price will definitely cause sticker shock. But if you add up its functionality (phone, 4K monitor, 5G cellular modem) the price becomes easier to swallow. And for a certain type of creative, the Xperia Pro could be worth every penny. The Xperia Pro is now for sale in the US.

On the bottom of the phone you’ll find the USB-C port on the left and the micro-HDMI port with a cover in the middle. To use the Xperia Pro as a field monitor, simply plug in an HDMI cable from a camera (with a micro-HDMI connector at one end), turn the camera on and open up the aptly named External Monitor app on the Xperia Pro.

Depending on your camera’s settings and output, you’ll see a preview of what you’re filming on the Xperia. Unlike many camera monitors, the Xperia Pro lets you use it like a phone. To zoom the image in or out, simply pinch the screen. The app has tools for screen lock, brightness control, zooming, grid lines, frame lines and a 180-degree image flip.

Smartly, Sony hasn’t made any of the functionality proprietary. I tried the Pro out with both a Sony A7SIII and a Panasonic S1H mirrorless camera and the app worked great for both. The Xperia Pro’s display supports 10-bit color, but currently the monitor app only supports 8-bit video. Sony says an update to 4:2:2 10-bit video is planned.

A typical 4K camera monitor costs hundreds of dollars. The Xperia Pro can become a 6.5-inch monitor without the typical bulk of most monitors. As a monitor, you can still interact with it like a phone. And best of all it doesn’t require heavy external batteries to power it.

The Xperia Pro for live streaming and broadcast

The combination of 5G and the micro-HDMI port allows you to stream live video from a dedicated external camera via the Xperia Pro. It can connect directly to social media platforms like YouTube. That means I can use a Sony A7SIII mirrorless camera and nice lens to capture video live and have the Xperia Pro upload the video signal over 5G (preferably mmWave) to whichever broadcast platform I’m using.

In terms of live streaming, there’s a lot to be skeptical of here. But I am excited to test its abilities thoroughly. Over the past months, an interesting proof of concept similar to the Xperia Pro was on full display along the sidelines of NFL games. NFL Gameday host Mike Garafolo shared a photo on Twitter of a camera rig nicknamed The Megalodon which was used by the Fox NFL broadcast crew. The rig is made up of Sony A7 IV mirrorless camera, a gimbal, a monitor and a cellular modem (in the backpack) which shares the video signal to the broadcast truck. It’s not hard to imagine an Xperia Pro being used in lieu of the cellular modem or the monitor.

To help you self broadcast, Sony built a Network Visualizer app that displays upload and download speeds in real time. The app can become a PIP window and run over any app you’re using for broadcast.

Xperia Pro can upload photos quickly to an FTP server

The Xperia 5 II brought support for USB-C tethering to the Sony A7SIII for speedy photo file transfers to a file transfer protocol server. The Xperia Pro inherits the same ability. But with the addition of 5G, you could have even faster speeds — in theory.

Back to Top
Close Add post
X
Sony Xperia Pro finally launched: A phone with last year’s processor for $2,500…AndroidSony has launched the Xperia Pro smartphone in the US.It offers HDMI-input support so you can use it as a camera monitor.The phone has a price tag of …

The Sony Xperia Pro is a $2,500 phone and 4K camera monitor that can broadcast video

X
Today only: Get an Acer Chromebook C740 for just $100…AndroidIf you’re on a tight budget but need a laptop for work or study, this could be just the deal for you. Woot is currently offering this refurbished Acer…
close