Home Business The Stock Market Can’t Get Much Better From Here. Why a Correction Could Be Coming.

The Stock Market Can’t Get Much Better From Here. Why a Correction Could Be Coming. 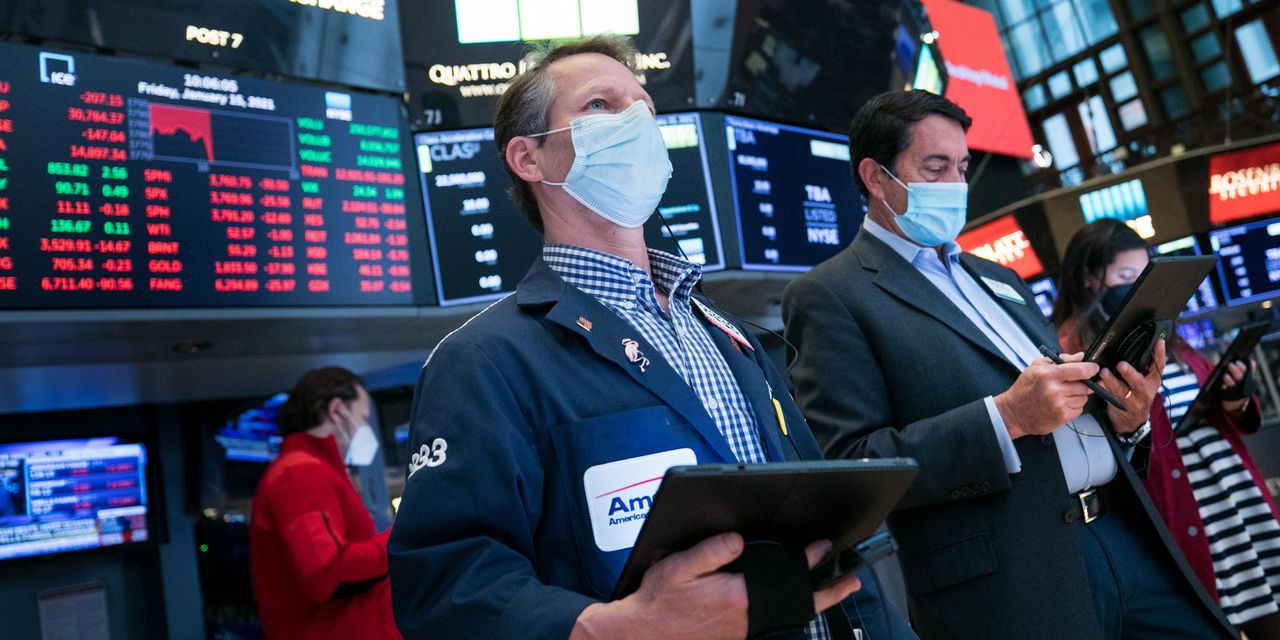 
The stock market could experience a correction soon.

Prices already reflect a wallop of government spending and central-bank aid that can’t get much larger from here,

warns. Other market watchers are downbeat as well.

The S&P 500 entered Friday up about 1% year to date, but ended the day with a loss of 0.7%, bringing the year-to-date move to 0.3%. Stocks were down even after President-elect Joe Biden said he wants to spend an additional $1.9 trillion to tide over consumers and businesses until normality returns.

Meanwhile, valuations are high. The equity risk premium—the earnings yield on the average

stock minus the yield on the safe 10-year Treasury note—is roughly 3.2%. The lower the premium, the more richly valued stocks are. Historically, the risk premium rarely dips below 3%, but when it does, it often portends market weakness.

A survey of institutional investors by Bank of America yielded a result of 7.1 on a scale running from deep pessimism at 1 to great bullishness, at 10. The closer the reading moves to 10, the more reason for concern about the market.

At the same time, investors are now holding far less cash than they were just months ago. The need to preserve firepower to buy at lower prices makes them less likely to step into the market to buy on minor dips.

That cautious view is becoming more widespread on Wall Street. A downward move of roughly 8% in the S&P 500 is in the cards in the near term, Canaccord Genuity’s Chief Market Strategist Tony Dwyer wrote in a note Friday. BlackRock CEO Larry Fink told Barron’s Thursday that while he thinks the market’s foundation remains solid, he expects a 5% to 10% correction in the course of the year.

Put simply, the market has gotten as much of a boost from expectations of stimulus as it is likely to get. Prices are reflecting the elevated level of liquidity in the economy, so the near-term upside is limited.

It often takes a catalyst, though, to spur a correction.

Two factors in particular could kick one off. First, rising inflation and interest rates are threats. Rates are still below the expected level of inflation, so fixed-income returns are generally below zero in real terms. That means they haven’t yet become a threat to investors’ hunger for stocks.

“If the 10-year Treasury yield starts moving into the 1.4%, 1.5% range, that’s where you get a little bit concerned,” Brian Price, head of investment management for Commonwealth Financial Network, told Barron’s. The yield is currently at 1.1% and while a move to 1.4% wouldn’t itself be a meaningful threat to stocks, Price noted that too fast a move to that level would make investors nervous that the yield is gaining too much traction.

The biggest risk to 2021 earnings is a negative vaccine surprise. Continued slow distributions of vaccines or worse-than-expected efficacy could slow down reopenings, cutting into the rebound in profits that investors were counting on as they bid up share prices last fall.

A correction could certainly happen. But if the vaccine narrative holds strong, earnings momentum can keep the larger bull market intact.