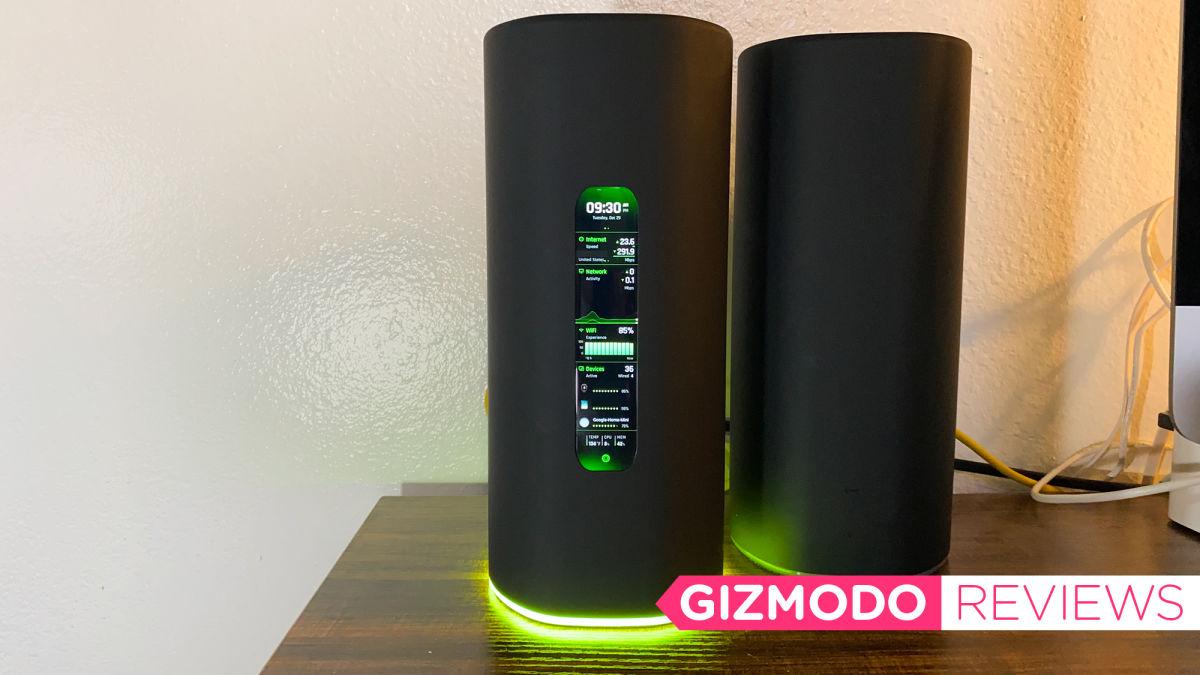 The Ubiquiti AmpliFi Alien is an expensive black Wi-Fi 6 Internet tube that promises super-fast wifi and a unique, pleasant user experience that is as intuitive as these things can probably be. The touch screen on the main unit is perhaps as close as it ever gets to intimidating, with a Matrix-green vertical readout full of graphs and numbers, but I think most people who want to will easily grasp its contents. I like to imagine when looking at the physical design and software UI decisions, that someone asked Ubiquiti if it’s committed to the color green, and the company responded with wedding photos from its responsibly-held Zoom ceremony to the swardy shade. Green though it is, the whole affair is so remarkably friction-free, geeky, and luxurious, in a way that only things that cost a lot of money ever can.

For real though. This thing is spendy. A single Alien retails for $380, and you can tack on an additional 320 dollars for the mesh unit, with its nigh-featureless surface and single ethernet LAN/WAN port. if you’re thinking of buying just the main cylinder and supplementing with lesser AmpliFi units, think again, Bucko. This puppy is only compatible with other Alien routers! That said, it’s not expensive relative to the other mesh Wi-Fi 6 systems, so long as you’re comparing apples to apples. At a total of $700 for a pair, it’s only $50 more than the Wi-Fi 6 Netgear Orbi, while the Linksys MX10 Velop clocks in at the same $700 if you buy two (a single Alien is actually cheaper than a single Velop). Specs for each are impressive, and the only consensus opinion among them seems to be that they all cost too much money, which, yeah, but it does seem like Ubiquiti tries a little harder to soften the blow.

This thing is luxurious, has solid speeds, great connectivity, and thoughtful extras.

There’s no USB, WPA3 or Thread, and it feels pricey by comparison.

When you start to open the packaging—which feels like you’re removing a power cell from a starship or something—and you grab one of the heavy-ass, soft-touch-material-coated Aliens out, it’s pretty evident Ubiquiti wanted it to feel like you made the right call when you caved to that 0% financing deal on your credit card. Even the one-minute-ish setup feels lavish, with pleasant tones emitted from a way-better-than-it-ought-to-be speaker, and a MeshPoint setup that is as easy as plugging it in. The AmpliFi app is great, and while it’s not exactly lousy with options, it still offers a decent amount of configuration options relative to other mesh alternatives. I love, for instance, being able to not only toggle the status LED and touchscreen on or off, but to also adjust their brightness and set a night-time schedule.

When I settle down to review a new router, I typically have to block out an entire afternoon just for troubleshooting all the smart home devices that won’t connect until I factory reset them, which brings with it all manner of frustrations in a smart home, and irritates my family. This is the first time I have ever set up a new router for review and watched all 35+ wireless devices just connect. I spent the next week waiting for something to fail and it simply never happened. Such luxurance!

Now, there are some compromises to be aware of. First, though you get a tri-band router in the deal, one of those bands only pushes 5 GHz 802.11ac, while the other 5 GHz and 2.4 GHz bands do 802.11ax. The Alien uses that 802.11ax 5 GHz band as wireless backhaul for communicating between the two routers, which means you are going to share your traffic with backhaul traffic. The workaround is using ethernet for backhaul or skipping the mesh set up, but most people aren’t into running long-ass ethernet cable if it isn’t already there or buying a mesh router and not using the mesh. Also, there are no USB ports to be found on the AmpliFi Alien, neither are there any ethernet ports that offer speed in excess of 1 Gbps. For most people, these things don’t really matter—gigabit internet is still pretty hard to come by, much less anything faster than that, and if you’re giving honest thought to buying this router, it’s fairly likely you aren’t using it for direct-attached storage or trying to get your internet from a 4G cellular signal. Still, we do like our options, don’t we?

Listen, here’s the deal: my internet plan isn’t incredibly fast. It’s definitely not slow by current standards—300 Mbps is more than enough to stream multiple 4K videos at once, while listening to music, while gaming, while yelling at tubes to tell you how many half-cups are in a cup. My old timey 802.11ac mesh network gives me fast internet in all but the farthest reaches of my yard. Thing is, you don’t buy a Wi-Fi 6 router because 802.11ac is a slow standard. You do it because Wi-Fi 6 is a much better multi-tasker.

For that, you can blame Multiple User Multi-Input Multi-Output (MU-MIMO), and its equally-memorably-named cousin, Orthogonal Frequency Division Multiple Access (OFDMA). Thanks to the increasing presence of wearables and smart home devices, our networks are growing in complexity, and so, too, is the demand we place on our network hardware. Those acronyms bring order to the chaos by letting your router send transmissions to each of your many devices in either multiple spatial streams (great for gaming or video calls) or simultaneous, slightly-offset data packets destined for multiple clients in a single channel. OFDMA, which uses the latter technique, is particularly cool and is the reason 802.11ax is so good for a home in which tons of smart home devices’ data packets are whizzing about. If you want to read about it, I recommend this explainer, and if you want good visualizations, I like this video.

There is no indication that the Alien does any of this particularly better than its primary competitors, however, and some other reviewers found it wanting. I have not personally tested its most direct competition yet, but I have tested other Wi-Fi 6 routers, and relative to those, the numbers were fair, but not exceptional. With one Alien, I was seeing full ISP speeds as far as 45 feet away, outside my home, but about a third the throughput 80 feet back, with some trees and stuff in the way. Adding a MeshPoint, I saw a heftier drop at 45 feet, but better speeds in the way-back of my yard. Relative to the fastest other Wi-Fi 6 router I’ve tested—TP-Link’s Archer AX6000—download speeds were slower from 45 feet on, though upload speeds remained close to the max possible the entire time.

Of course, numbers don’t tell the whole story, and in either configuration, I was struck by how little thought I gave my connection. Because of holiday timing, I lived with the Alien system over a particularly demanding time, as my wife and I are both home, and we’re doing more of just about everything—streaming, gaming, video-calling. During that entire time, I did exactly zero network troubleshooting, and it was glorious.

Beyond network performance, I was pretty immediately charmed by the minor extravagances you don’t see in a normal router. Brightness adjustment for the touchscreen and LED ring on the bottom of the cylinder. A router steering toggle, so you can make sure a device stays connected to the gateway unit as long as possible. A speaker you could legitimately listen to music on, but which you’ll almost never hear outside of initial setup. Haptic feedback on the touchscreen. A Pi-Hole-style DNS ad blocker that Ubiquiti doesn’t even really promote—it’s just there, waiting for you to find it.

It even has a VPN that lets you route traffic through your home network before it goes out to the wider internet, masking your IP address as it goes. Like hand-stitched leather on fancy automotive upholstery, none of it is necessary; it’s tantamount to rich Mahogany and leather-bound books. But they’re the kinds of features you add to your list of nice-to-haves when you look at other routers, and they might be just enough to push this one over the top when comparing it to its primary competition, depending on how you feel about some of its omissions—it lacks a USB port for direct-attached storage, for example, or the lack of WPA3 or a low-power smart home hub wireless protocol like Thread, yet.

A lot of these features are already on the AmpliFi HD. And, really, that’s all the Alien is: An AmpliFi HD, but more. Broader coverage, at two times the area of its predecessor, much larger total traffic capacity at a theoretical 7685 Mbps (versus 1700 Mbps on the HD), and 8×8 MU-MIMO—that’s more than twice the MU-MIMOs! It’s future-proofing, even as it anchors itself perhaps a bit more in the now than you’d hope.

On the whole, the Alien mesh system has plenty going for it. It’s fast, reliable, and I don’t have to think about it—to my reckoning, those are the three pillars of Good Internet, and everything else is dressing. Does it justify the price? Hell no, but I’m willing to bet that for those who do drop money on the AmpliFi Alien, it doesn’t tend to be a regretful purchase.