Home General The US will start Covid-19 vaccinations this week, FDA says

The US will start Covid-19 vaccinations this week, FDA says 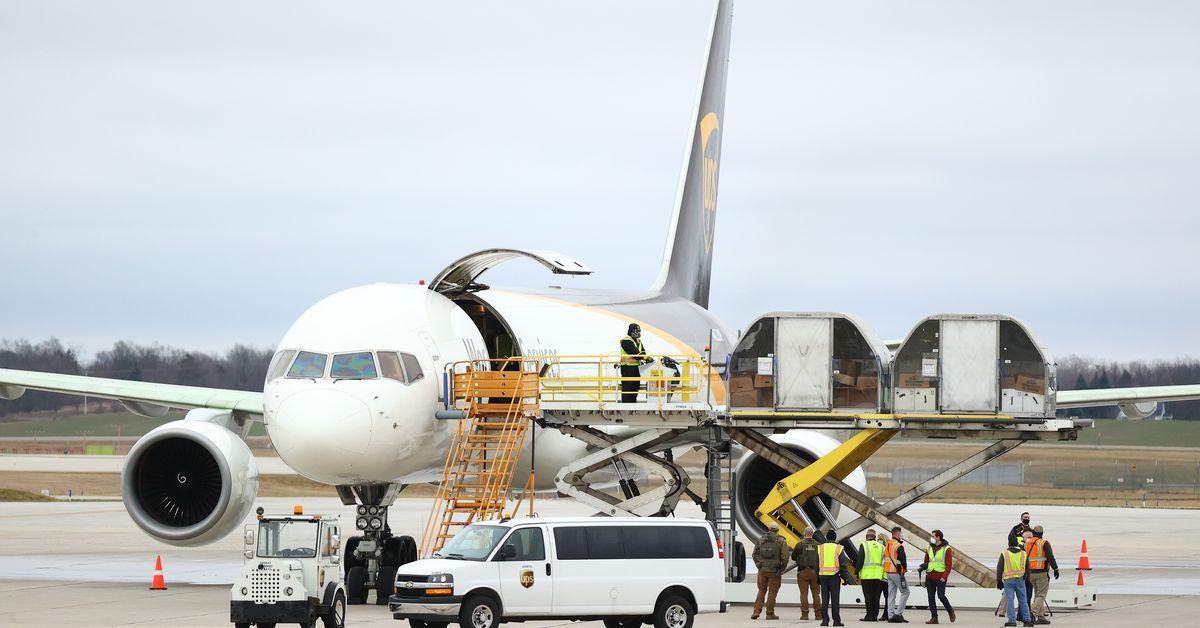 On Sunday, the first batches of the Pfizer-BioNTech Covid-19 vaccine were loaded onto trucks and cargo planes to be distributed around the United States.

Doses of the vaccine, which received an emergency use authorization (EUA) from the Food and Drug Administration on Friday, will be sent to all 50 states, and vaccinations could begin as soon as Monday, FDA commissioner Dr. Stephen Hahn said Sunday.

The FedEx plane that will transport the first shipment of the Pfizer- BioNTech vaccine in the US now has its cargo door open here at @FlyGRFord…. vaccines should be loaded on soon, then flight takes off for Memphis- from there shipments will be dispatched around the country pic.twitter.com/i0DrMW1i2a

Nearly 3 million doses will be delivered in the first round of shipments, Health and Human Services Secretary Alex Azar told CBS News’s Margaret Brennan on Face The Nation this Sunday.

“We’re shipping 2.9 million doses of vaccine,” Azar said. “So whenever they get them in arms, that’s 2.9 million people getting vaccinated.”

NEWS: @HHSGov‘s @SecAzar tells @margbrennan states will administer vaccines “as soon as they’re able to,” but did not offer a figure for the number of Americans who will be *vaccinated* by the end of the week.

2.9 million doses will be *distributed* by end of week pic.twitter.com/I2CMErrUVF

Azar also said that a second shipment of doses — the Pfizer-BioNTech vaccine requires two separate shots, administered three weeks apart, to be fully effective — would be reserved to ensure those who received the first dose would be able to complete their course.

The Pfizer-BioNTech vaccine is estimated to be about 95 percent effective in preventing Covid-19.

According to recommendations published by the Centers for Disease Control and Prevention, health care workers, as well as essential workers in other industries, and people over the age of 65 or with “underlying medical conditions” that place them in a high-risk category, will be first in line for the vaccine. A committee that advises the CDC has further recommenced that health care workers and residents of long-term care facilities — a group of about 24 million people — be at the very front of the line.

Exactly how quickly these at-risk populations will be able to receive the vaccine is not clear, however. On Sunday, Azar said he was optimistic about the initial vaccine distribution.

“We could have every nursing home patient vaccinated in the United States by Christmas,” Azar told Brennan, and as many as 20 million people vaccinated by the end of the December.

HHS, however, has reportedly offered different guidance, telling health providers to begin vaccinating those in care homes on December 21, which would likely mean that all residents would not be vaccinated by Christmas. Former FDA commissioner and current Pfizer board member Dr. Scott Gottlieb told CBS News this delay was mandated to allow time for residents and guardians to provide consent. “It’s a very costly delay,” Gottlieb said.

Azar also predicted that as many as 100 million Americans will be vaccinated by the end of February, an estimate that aligns closely with President-elect Joe Biden’s plan to see 50 million people vaccinated within his first 100 days in office.

A second EUA, for Moderna’s Covid-19 vaccine, could be forthcoming shortly. An FDA advisory panel is scheduled to review the vaccine on December 17, and the US has ordered 200 million total doses in anticipation of its approval. And Slaoui said Johnson and Johnson’s vaccine candidate — which would require only one dose — could be approved in late January or early February.

US authorization of the Pfizer-BioNTech vaccine trails that of the UK — which cleared it for emergency use last week and started vaccinations Tuesday — as well as that of Canada.

This led the White House to pressure the FDA to get the EUA over the finish line by Friday. In a tweet, President Donald Trump attacked the agency as “a big, old, slow turtle.”

While my pushing the money drenched but heavily bureaucratic @US_FDA saved five years in the approval of NUMEROUS great new vaccines, it is still a big, old, slow turtle. Get the dam vaccines out NOW, Dr. Hahn @SteveFDA. Stop playing games and start saving lives!!!

Separately, the Washington Post reported Friday that White House Chief of Staff Mark Meadows told the FDA’s Stephen Hahn that Hahn might be forced to resign if the EUA wasn’t issued that day. Hahn defended the timeline Sunday, saying that his agency worked with all possible speed to get the vaccine authorized.

That shouldn’t undermine confidence in the vaccine, though: It was reviewed by an independent advisory panel on Thursday prior to the EUA, and the FDA concluded that the vaccine had “a favorable safety profile, with no specific safety concerns.”

Despite a vaccine, the US is entering the darkest phase of the pandemic

Sunday’s vaccine shipments come not a moment too soon. The coronavirus is currently spreading out of control in the US as deaths and hospitalizations from the virus rise to unprecedented levels.

As of Saturday, the country was averaging more than 208,000 new Covid-19 cases per day, according to the New York Times, after crossing the 200,000 per day mark for the first time on November 27.

Things aren’t likely to get better for some time, either. According to CDC Director Robert Redfield, the US may well “have more deaths per day than we had in 9/11” for the next 60 to 90 days.

Biden, who has put his Covid-19 response plan front and center during the presidential transition, has been equally dire in his warnings.

“Christmas is going to be a lot harder,” he said last week. “I don’t want to scare anybody here, but understand the facts — we’re likely to lose another 250,000 people dead between now and January.”

Currently, the US death toll stands at more than 298,000 people, according to the New York Times.

The pandemic is also leaving hospitals and health care workers depleted and exhausted. According to Dr. Vin Gupta, “there’s just not enough doctors, nurses and respiratory therapists to staff intensive care unit beds” in some places. In Mississippi, for instance, there are no ICU beds left.

“People are going to get suboptimal care,” Gupta told NBC.

In California, dwindling ICU capacity triggered a wave of new shutdowns last weekend. With intensive care units below 15 percent capacity in some parts of the state, more than 33 million Californians are once again under lockdown orders.

Beyond the immediate crisis, public health experts have also emphasized that now is not the time to relax best practices in anticipation of a vaccine. As Vox’s Umair Irfan explained last month, there are lots of steps that need to be taken to scale up distribution for a mass vaccination campaign:

A global supply chain, from the glass vials that hold the vaccine to the syringes used to inject them, needs to spool up to make huge quantities of the vaccine. Manufacturers will also have to ensure that vaccines remain intact and under strict temperature controls from the factory to the hospitals and clinics where they will be used. The process of manufacturing, distributing, and administering a vaccine could take months.

It’s also important to remember that a vaccine is not enough on its own to end the pandemic. Measures like social distancing, good hygiene, and wearing face masks will remain essential to control the spread of Covid-19 until a vaccine is widely available. Public acceptance will also be a major issue, and health officials will have to overcome a rising wave of vaccine hesitancy.

In the meantime, Americans will need to do everything possible to tamp down the virus’s uncontrolled spread — and no matter what, Redfield warns, the coming months may be “the most difficult time in the public health history of this nation.”