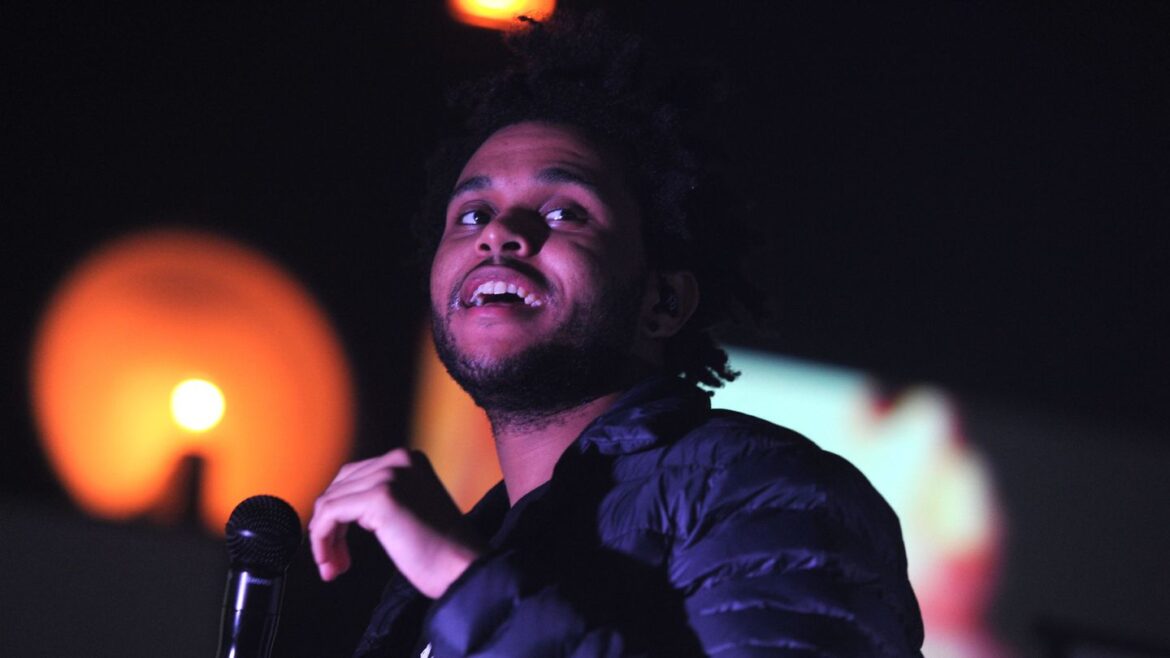 From the beginning of The Weeknd’s debut mixtape, House of Balloons, he informs us that we’ll want to be “high for this.” Named after a one-bedroom apartment he shared with friends in his Toronto hometown, House of Balloons is a dark body of work, with trippy tales of partying, heartbreak, and drug-fueled sexcapades. While these themes still resonate within Abel Tesfaye’s vibrant, glistening pop tracks today, he first stepped onto the scene with more minimalistic, brooding sounds, a far cry from the rallying maximalism of “Blinding Lights.”

The Weeknd is one of the most recognizable voices and faces in music today, with five Billboard Hot 100 No. 1s to his name and a Super Bowl halftime performance under his belt. But when House of Balloons dropped on March 21, 2011 — 10 years ago this weekend — he was still an anonymous entity, releasing his songs online with little context.

“I think the mysterious, faceless vibe kind of helped him in the beginning,” music producer Cirkut tells MTV News. “I think that kind of created this mysterious allure around him. It made people even more inquisitive, wanting to know, ‘Hey, who’s this guy? Have you heard of this guy, The Weeknd?’ It made the music come first, rather than putting himself all out there. It was just all about the music, the vibe, and the artwork.”

Cirkut first met The Weeknd through mutual friends, who told the producer that he was “the next big thing.” The pair connected for a session at Cirkut’s Dream House studio in Toronto. At the time, Cirkut was also fairly new to the music scene, though his resume already boasted tracks for mainstream heavyweights Britney Spears and Kesha.

The Weeknd’s alternative R&B sonances were relatively new territory for Cirkut, but he was drawn to Tefaye’s vibe and aesthetic. “I do everything from some of the darkest R&B, to hip-hop stuff, to the most bubblegum of pop you can get,” Cirkut says. “I pride myself on being versatile like that.”

During their session, Cirkut created a bassline and then formed general musical arrangements. The Weeknd began freestyling in the booth. The result was “High for This,” an ominous, sensual track which became the opener for House of Balloons. Cirkut says the core of “High for This” was recorded within a day; however, he and The Weeknd went over it several times before they were happy with it.

“As a producer in the studio, it’s often my role to tell someone ‘Sing it again,’ or ‘Do this,’ or ‘This isn’t good enough,’” or stuff like that,” Cirkut says. “But he’s kind of his own biggest critic. He’ll be the one saying, ‘I need to re-record this.’”

Around January 2011, Cirkut and his then-creative partner Adrian Gough later connected The Weeknd to producer Doc McKinney, who, along with Illangelo, would go on to produce the bulk of House of Balloons. Illangelo had begun working with The Weeknd about a month earlier. The pair had crafted several tracks, including one called “Crew Love.” That was one of three tracks, along with “Shot for Me” and “The Ride,” that ended up going to fellow burgeoning Toronto superstar Drake for his sophomore album, Take Care.

“I just feel like when Doc, Abel, and myself linked up, it was just kind of like a meeting of the minds of people that want to hear or see something different in the world,” Illangelo says. The Weeknd’s ghostly opening vocals make “Crew Love” distinctly his, and he owns the track before Drake enters halfway through.

At the time, McKinney, Illangelo, and The Weeknd were going for new, fresh sounds. They worked swiftly: House of Balloons was released via a zip folder on The Weeknd’s official website just two months after the trio’s initial meeting. McKinney says the quick release allowed for “the freshest shit.”

When producing tracks for House of Balloons, McKinney and Illangelo were minimalistic in their approach, utilizing software like Ableton Live, MPC studio, and Cubase instead of many different instruments. “I pretty much decided to not use any hardware equipment,” Illangello says. “I didn’t have any keyboards and synthesizers. We used different interfaces, we used different mics, we were just using anything around us. Everything was inside the [Cubase] box, except for Doc’s wavy-ass guitars that would bless up the songs.”

“Wavy” would soon become a recurring aural pattern for House of Balloons, as The Weeknd would use the word several times during the recording process, particularly with closing track, “The Knowing,” in which The Weeknd confronts an unfaithful lover. McKinney says this is the first track he remembers cutting with The Weeknd and Illangelo.

“[The Knowing] was a beat that I had for probably three years at that time,” McKinney says. “But I had it at 90 BPM. And he was like, ‘I want to do stuff that’s wavy.’ And I was like, ‘Oh man, this Cocteau Twins sample [of “Cherry-Coloured Funk”] is super wavy.’ And he was like, ‘That’s amazing, we should slow it down.’”

McKinney then slowed the track down by 10 BPM, but it still wasn’t “wavy” enough for him.

It features a prominent sample of Siouxsie and the Banshees’s “Happy House,” part of the creative, interpretative use of samples, including a few from Baltimore indie band Beach House, that made House of Balloons a classic.

“I just think the interpolation of that, in juxtaposition with everything at the time, helped make it timeless,” McKinney says. “Sampling anything that already is classic and timeless is kind of like grabbing onto the coattails, and hopefully you don’t rip off the jacket.”

House of Balloons also contains “Wicked Games,” which was released as The Weeknd’s debut single after he signed a deal with Republic Records in 2012. He repackaged his first three mixtapes — House of Balloons, Thursday, and Echoes of Silence — as one collective album called Trilogy. “Wicked Games” became his proper debut single, nearly a year-and-a-half after its original release.

Although the coy, heavily melodic “Wicked Games” was the beginning of a promising career for The Weeknd, both McKinney and Illangelo insist that they were never trying to appeal to pop radio. They were just trying to make stuff they wanted to make.

“I don’t think anybody expected anything, man,” Illangelo says of the song’s success. “Like before any of this, nobody saw the vision. Even with a song like ‘Wicked Games’ we didn’t give a fuck about [radio play]. We were just making the fucking illest shit we’ve ever made in our life. And we were stoked on that.”

Ten years after the release of House of Balloons, the once mysterious, faceless Canadian crooner is now a household sight — even if he’s lately kept that face under bandages and prosthetics. While The Weeknd has experimented with several genres throughout the past decade, including R&B, trap, EDM, and ‘80s-style synthpop, his poignant, personal craft and cinematic aesthetics set him apart from other pop stars.

Doc McKinney, Illangelo and Cirkut have all continued to work with The Weeknd since House of Balloons and admire his drive, determination, and ability to take creative control on all of his projects. Even before he was one of the world’s biggest pop stars, The Weeknd always had a drive for greatness.